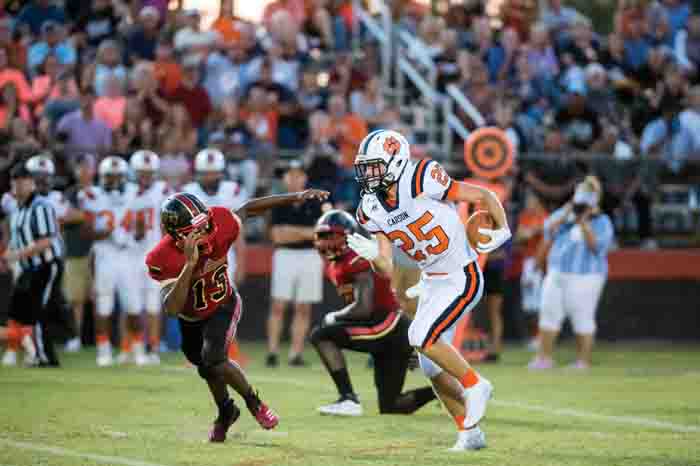 SALISBURY — Salisbury senior cornerback Lawon Blackwell was starting to wonder if he was ever going to get an interception.

Now he’s put one in the books. His first pick of the season came in Salisbury’s eighth game, a 30-6 Central Carolina Conference win at Ledford on Friday.

“It was a huge one in the second quarter,” Salisbury head coach Brian Hinson said. “It was one of the better interceptions I’ve seen all season.”

Donavan Corpening, who plays the opposite corner, has made a couple of interceptions, so Blackwell was starting to get some good-natured ribbing from his teammates.

“I had three interceptions last year, so it was about time I got one my senior year,” Blackwell said. “I really needed to get one.”

Blackwell is also a basketball player for the Hornets, more of a rebounder and defender than a scorer. If you saw walking down the halls at SHS, your first thought would be hoops, not football. He is rangy and wiry, tall for a cornerback at almost 6-foot-2. He weighs a modest 170, but the pounds are in the right places. He’s slim-waisted and long-armed.

“Looking more like a basketball guy, yes, I get that a lot,” Blackwell said with a laugh.

But Blackwell has an excellent role model for football. His older brother is Tywun Rivens, an All-CCC  linebacker for the Hornets in 2015 and 2016, leaner seasons for SHS prior to Hinson taking the coaching reins in 2017. Rivens was a fine player (he had a memorable 17-tackle game against Surry Central) and a fine student. He wasn’t heavily recruited, so he walked on at Campbell University. He made the team, got some playing time as a freshmen, worked his way into the starting lineup as a sophomore and now, as a 225-pound junior, he’s one of Campbell’s top defensive players. He ranks second in tackles for a 5-1 team, while majoring in biology.

“He’s doing great,” Blackwell said. “I’ve been to some of his games.”

Last Friday’s Ledford game loomed as an immense one for the Hornets (7-1, 5-1) for a variety of reasons.

First, the Hornets were coming off their first setback, a discouraging effort at Oak Grove. Unbeaten Oak Grove has an excellent team, and the Hornets played one of their worst games. Salisbury made a multitude of offensive mistakes. Oak Grove scored twice on defense and rolled 35-19.

So how would the Hornets react to their first serious adversity? That’s something everyone wanted to know.

Then there was the magnitude of Friday’s opponent. Salisbury had renewed its old rivalry with Ledford in 2015. Ledford trounced Salisbury in their non-conference meetings in 2015 and 2016, 26-0 and 41-7.

Salisbury had decent teams, but went 0-for-4 against Ledford and North Davidson in 2017 and 2018, the first two years of the new, improved CCC.  Now it was time to play Ledford again — on the road. And Ledford had won five straight CCC games since opening with non-conference losses to 4A Glenn and second-ranked Randleman.

Making things even more daunting, the Hornets would be without safety Jadarius “JD” Wood for the Ledford game. He’s the secondary’s hardest hitter and probably the best-known of the Hornets’ back four.

“We didn’t have JD, so we put (sophomore receiver) Marcus Cook back there,” Hinson said. “We challenged Lawon to be more of a leader for the back end of our defense. We needed him to be more vocal with JD out.”

“We had a younger guy in the secondary, but that just meant the rest of us had to really stay focused and make sure there were no mistakes,” Blackwell said.

Ledford’s offense is centered around quarterback Walker Lackey, a basketball star. He isn’t big, but he compensates with quickness. Salisbury had watched film of Lackey destroying Central Davidson (a team that had given Salisbury some trouble) with 177  rushing yards. He’d also completed all seven of his passes for 69 yards.

Against Lexington, Lackey had completed 10 of 13 passes for 125 yards, so he was capable of hurting the Hornets by land or air.

Salisbury’s defense had two obvious goals — not to let Lackey break containment and not to let him make big plays in the passing game. Ledford wasn’t going to throw it around, but the Panthers would try to hit some big ones.

Ledford was also missing a standout — 260-pound defensive lineman Isaiah Shiver — but as the game unfolded, it became the defensive struggle that was expected. The Hornets finally went up 3-0 in the second quarter on a Wade Robins field goal. Ledford tried to strike back, but that’s when Blackwell made his interception.

“I was playing my man, following his route, trying to mirror him,” Blackwell said. “When he turned around, I knew the ball was coming. Then I saw it, and I was able to make the play.”

That interception helped the Hornets get to halftime up 3-0. Defensively, the Hornets had done everything they had set out to do.

“They were mostly the running the ball and they weren’t running it my side very much,” Blackwell said. “I’m on the same side as (sophomore linebacker) Jalon Walker, and teams try to run away from Jalon.”

Salisbury took over in the second half. Vance Honeycutt threw a touchdown pass to Patrick Taylor. Workhorse Mile McLean kept pounding out gains behind an inspired offensive line, and he finally broke a long touchdown run. Ledford scored in the third quarter to make it 16-6, but the Hornets answered two more times — with scoring runs by freshman JyMikaah Wells and McLean.

Struggling to move the ball on the ground, Ledford had to throw more than it wanted to in the second half. Blackwell had a couple of breakups.

Lackey finished with 85 rushing yards on 12 carries, but the Hornets could live with that. He’d come in with three 100-yard rushing games against CCC opponents.

Of equal importance, the Hornets had completely stifled the pass. Lackey was 3-for-14 for just 26 yards through the air.

“Ledford’s quarterback is a good player, but we were prepared and adjusted our defense to him,” Blackwell said. “To win a game this big, it feels great. It’s hard to describe how good it feels.”

Hinson also felt good. He agreed it was the biggest victory of his three seasons at Salisbury.

There’s not much doubt it was the most significant CCC victory for the Hornets since they outscored Thomasville, 43-39, in their ninth game in 2012. That classic seven years ago was a showdown for the league title.

“We had pretty good teams the last two years (7-4 and 7-5) and won the games we were supposed to win,” Withers said. “But this is the first time in a long time where our guys went out and beat a team that’s as good as us or above us. It’s a very big win.”

In the MaxPreps rankings, which matter quite a bit when it comes to playoff seeding, the Hornets moved up 11 spots this week.

The goal now is to go 1-0 in each of the three weeks remaining.

If the Hornets can accomplish that, they’ll finish the regular season 10-1.

The Hornets will play East Davidson at home on Thursday night at 7:30 p.m. That game been moved up 24 hours to try to beat the rain that is predicted for Friday.

This week the Hornets will be Ledford fans, hoping Ledford can beat Oak Grove to create a three-way tie for first in the CCC.