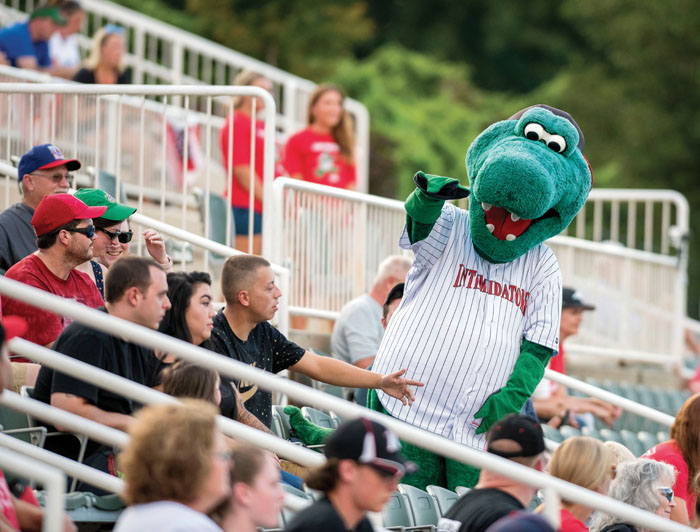 JON C. LAKEY/SALISBURY POST Mascot Tim E. Gator works the crowd during a game on Aug. 15 at the Kannapolis Intimidators’ old ballpark at Moose Road Stadium. The team will play in a new stadium in downtown Kannapolis next season.

KANNAPOLIS — The 1,223 submissions for the new name of the Kannapolis baseball minor league team will be narrowed down to one today and announced at “The Big Reveal.”

Today’s event, named “The Big Reveal,” invites fans for the celebration of announcing the new name and mascot at 6 p.m. at the Gem Theatre. After, fans can go out in the street for a festival with food trucks, inflatables for kids, circus performers, music and fireworks, which start at 8 p.m.

To get inside the Gem Theatre, it will be first-come, first-served, with 500 fans getting in. General Manager Matt Millward recommended fans get there early to get inside. Outside the theater, the reveal will be displayed on a big screen.

It’s a historical night for the Kannapolis baseball team and Millward said he wants to start off the team’s future on the right foot.

As the last season as the Intimidators came to an end, Millward said he wondered if the lackluster years at the Moose Road stadium were because they did not get off on the right foot in the beginning. The stadium was not completed in time for the first home pitch. Attendees had to use portable bathrooms. Concession stands, locker rooms and staff offices weren’t completed until well into the first season.

Meanwhile, the 4,930-people capacity ballpark, under construction now, will feature luxury suites, picnic terrace areas, an outfield bar and 6,000 square feet of club/banquet space. It will also have the majority of its seating in the shade, a 360-degree concourse, a bigger office staff, a museum of baseball with photos from the team’s 25 years and memorabilia from the final game as well as a Kannapolis backdrop.

“I never would have imagine we would have received 3,000 requests,” Millward said. “”I just wanted to fill the theater.”

Narrowing it down thousands of submissions to one name started with fans being asked to submit their recommendations in February and meetings with city officials, community members and front office staff.

Some of the submitted recommendations were kangaroos, unicorns, opossums and even checkered soxs. Others wanted the Intimidators name, a nod to the nickname of former team owner and NASCAR legend Dale Earnhardt, to stick. Earnhardt died in February 2001 and never saw the Kannapolis Intimidators play a game.

While asking for fan recommendations, Dale Earnhardt Jr. tweeted “What a shame it has to end,” but followed with a tweet suggesting “Ironheads” to honor Earnhardt or “Cannons” to honor the city’s history.

The new ballpark will sit near the site of what was Cannon Mills. The textile mill, which supplied jobs and community for decades, was demolished in 2005.

The name change to be announced today is not the first. In its 25 years, fans have cheered on the Phillies and Boll Weevils, too.

Millward expects the excitement to grow infinitely after the announcement and as the April 16 opening day gets closer. Season ticket sales have already began.

Merchandise with the new team name and logo will be available at “The Big Reveal” in a retail location and a pop-up tent. The tent will remain until Sunday during 10 a.m.-5 p.m. The merchandise will also be online.