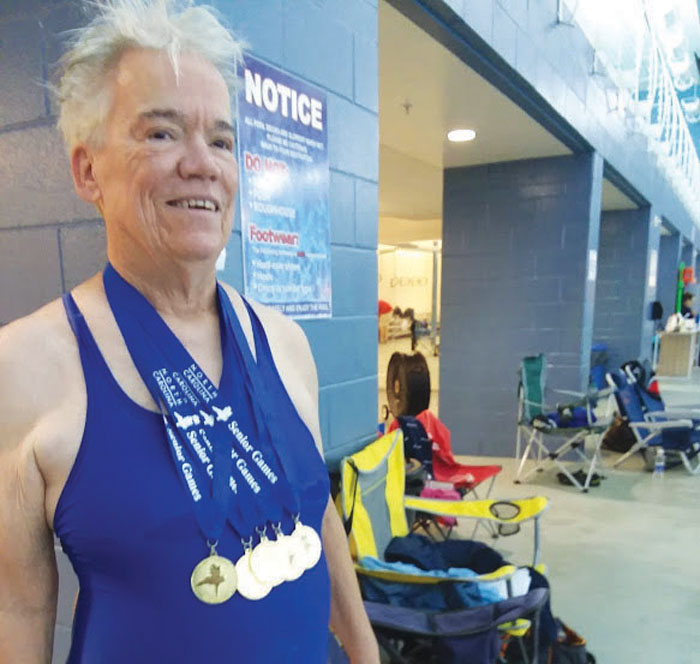 Submitted photo ... Salisbury’s Frances Shepherd, at the North Carolina Senior Games pool in Cary, in September. Shepher won five gold medals in her first year in a new age category (70-74). Shepherd is a long-time local swimmer and retired from the Rowan Salisbury Schools in 2014, following a 42-year teaching career.

Nearly fifty years later, Shepherd has retired from teaching twice, but has no plans to stop swimming. She enjoys being in the water too much, and frankly, she’s just too good — actually, great — to stop now.

In September, Shepherd won five gold medals at the North Carolina Senior Games in Cary. Now 70, she participated in a new age group (70-74) for the first time and won three butterfly (50, 100 and 200) races, the 200 individual medley and the 100 breaststroke.

“I’m 70 years old and they couldn’t get over me being able to swim eight lengths of the pool in that long butterfly,” said Shepherd. “No other women would try the 100 and 200, so they put me in with the men and I beat some of them, too.”

Shepherd set a new state record for 65-69 year olds in the 200 butterfly last year, but missed out on a new record in her new age group. “I swam too much, and got tired, I guess,” she said, but added that she has that to shoot for next year.

Senior Games swimming nationals are held every other year, so Shepherd’s efforts in Cary will remain at the state level. She’ll have to qualify again next year for nationals, which, according to Shepherd, will be in Florida.

In 2018, the nationals were in Albuquerque, N.M., but Shepherd sat those out, due to an eight-country European trip. “I knew I’d be worn out from the trip,” she said.

Born Frances Lunday, in Birmingham, Ala., her family moved to North Carolina when she was a toddler. She grew up mostly in Rowan County, but lived in Iredell County as well. She returned to the county as a high school sophomore and graduated from East Rowan in 1967.

She would have loved the opportunity to swim at East Rowan and as an undergraduate at Western Carolina University, but there were no programs for girls at the time. Title IX, a federal law making it illegal to discriminate on the basis of gender, paving the way for more opportunities for girls and women, was passed in 1972.

“Lord, if there had been a swim program in high school and college, I’d been shriveled up like a raisin, because I’d stayed in the water so much,” laughed Shepherd. “I loved it from the get go.

“Had there been programs, between track and field and swimming, I probably wouldn’t have done very well in the classroom — because I’d been training all of the time,” she continued.

But Shepherd did do well in the classroom at WCU, as well as earning a master’s degree at UNC Charlotte and a doctorate from Southwest University.

In the 1970s, she began a 42-year career in education, teaching “all the sciences, except physics,” at West Rowan High, Erwin Middle, East Rowan High and then, back to West.

Shepherd credits former Erwin and East principal Kelly Sparger for pulling her back into teaching, following her first retirement in 2002. Then she returned to where she started — West High — where she taught full-time for six years, before retiring again in 2014.

She also was instrumental, along with Trina Chester, in beginning a swim program at East Rowan. She coached the Mustangs as well as the Falcons’ swimmers, when she returned to West. During her career, Shepherd also coached track and field and softball.

“I started at West Rowan and ended at West Rowan,” said Shepherd. “And I really enjoyed teaching under Kelly for 15 years at Erwin and East. I just loved education and loved the kids I taught at all of my schools.”

Meanwhile, Shepherd’s husband, Robert, was in the North Carolina Veterans Home at the VA Medical Center. Upon her retirement, Shepherd was able to spend more time at the veteran’s home, a place she grew to love.

Sadly, Robert died in 2017, but Frances still volunteers at the veterans’ home.

“They take such wonderful care of the veterans there,” said Frances. “I help out in the veterans store. My heart’s with our veterans. They put their lives on the line for us. I get angry when people don’t respect the flag and this country because those veterans stuck their necks out for us and some came back in bad shape. I think the world of the men and women who served our country.”

Frances trains in the pool at J.F. Hurley YMCA. More days than not she’s there. “If I am in the pool, I’m going to swim a mile, nothing less,” she said. “I swim all the different strokes, but it’s always at least a mile.”

And even though she retired from the classroom, Frances, in a way, is still teaching. “By continuing to swim, I hope to inspire kids,” she said. “And really, anyone else. If I can do it at my age, so can they.”

High school football: Position change was a snap for…