Jets angry Darnold’s ‘seeing ghosts’ comment made it on air 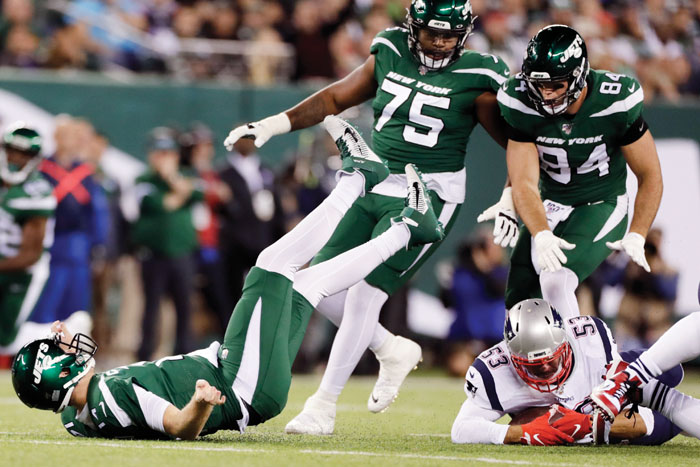 NEW YORK (AP) — The New York Jets are disappointed and angry quarterback Sam Darnold’s comment about him “seeing ghosts” made it on air during the “Monday Night Football” game.

Darnold was wearing a microphone for ESPN’s broadcast of New York’s 33-0 loss to New England. After the third of his five turnovers in the game, the Jets’ frustrated quarterback was sitting on the sideline in the second quarter when he made his comment that quickly went viral on social media after it aired.

“That was one of those things that was really disappointing to hear about after the game,” coach Adam Gase said Tuesday. “I don’t know if I’ve ever seen that where somebody that was mic’d up, that a comment like that was allowed to be aired. It bothers me. It bothers the organization.”

Gase added that the Jets will be “looking hard into our cooperation” with the networks going forward.

Select players are mic’d up during prime-time games and NFL Films has a representative listening on site. The representative then will approve the comments to air — in this case, on ESPN’s “Monday Night Football.”

“You’re never anticipating something like that happening,” Gase said. “The fact that it did just gives us pause to really cooperate anymore because I don’t know how we would allow our franchise quarterback to be put out there like that.”

The approval process is designed to help prevent players and coaches from having things they say that might cast them, the team or the league in a negative light from being aired.

By NFL rules, each team’s starting quarterback and head coach are required to be mic’d up by NFL Films once a season. New Orleans coach Sean Payton, San Francisco cornerback Richard Sherman and Pittsburgh wide receiver JuJu Smith-Schuster are among those who have worn microphones during “Monday Night Football” games this season.

Darnold fulfilled his requirement by being mic’d up against the Patriots.

In the Jets’ Week 2 loss to Cleveland, backup quarterback Trevor Siemian wore a microphone while starting for Darnold, who was sidelined with mononucleosis. Siemian left that game in the second quarter with a season-ending ankle injury.

Jets running back Le’Veon Bell took to social media to defend Darnold — and criticize the NFL.

“The NFL screwed Sammy over,” Bell wrote on Twitter. “There’s not one player in the NFL who’s cool with having every sideline convo broadcasted to millions…there’s a reason we’ve never heard other QB’s frustrated on the sideline like that before…that’s crazy, @NFL did Sam dirty as hell.”

In football parlance, “seeing ghosts” is a phrase sometimes used when a player is having trouble reading the coverages on defense, being fooled into reading them incorrectly or feeling pressures in the pocket that aren’t there.

That was clearly the case for Darnold, who had his worst game of his young career. He was 11 of 32 for 86 yards with four interceptions and a horrific 3.6 quarterback rating.

“I have a lot of confidence in Sam bouncing back from this,” Gase said.

COSTA MESA, Calif. (AP) — Melvin Gordon has been frustrated for a long time.

First, over a holdout for a contract extension that was not successful and then over his slow start once he returned to the Los Angeles Chargers.

But the running back did two things last Sunday that he considers inexcusable. He fumbled at the goal line against Tennessee, costing his team a chance at a win, and he let his emotions show.

When Gordon’s fumble allowed the Titans to hang on for a 23-20 victory, the frustration of the past four months finally boiled over. Gordon covered his face with a towel on the sideline and broke down. On Monday he refused to admit if he had been crying.

“One thing I hate most about Sunday is I let you all see me sweat,” Gordon said. “You’re never supposed to let them see you sweat or show emotion out there.”

Gordon’s return was supposed to provide another playmaker for the Chargers offense. Instead, it has been one of many struggles for a team that has lost three straight and is 2-5 going into Sunday’s game at Chicago.

When asked if he would have held out if given a chance to do it again, Gordon said he didn’t know if he could answer that.

“I know I won’t miss another training camp again. I can tell you that,” he said. “If I was to go back, I can’t say. With the running back thing and all, we want to get paid. That’s tough.”

But Gordon also realizes that holding out for two months has put him more under the microscope not only with fans, but with prospective employers next season.

Gordon is averaging just 2.25 yards per carry with his longest gain in 36 carries going for 7 yards. He doesn’t appear to be close to the running back who made the Pro Bowl last season and has more than 1,200 scrimmage yards each of the past three years.

He also knows that critical mistakes such as Sunday’s are more glaring considering everything that has transpired.

“You do something bad and everything is blown up. You don’t play, you don’t win, it’s blown up, and if I make a mistake it’s blown up,” he said. “We’re in a position right now where every win and every game counts.”

The Chargers will try to get their running game back on track this week despite a decimated offensive line. Gordon refuses to let the injuries be an excuse, and said it puts even more pressure on him to make them look good by finding a way to make it happen.

Coach Anthony Lynn and teammates are still supportive of Gordon and have confidence he can turn things around.

“I feel like once we start running the ball everything will go from there,” wide receiver Mike Williams said. “It’s been tough. Last year those games were going our way. Hopefully we can turn around things this week in Chicago.”