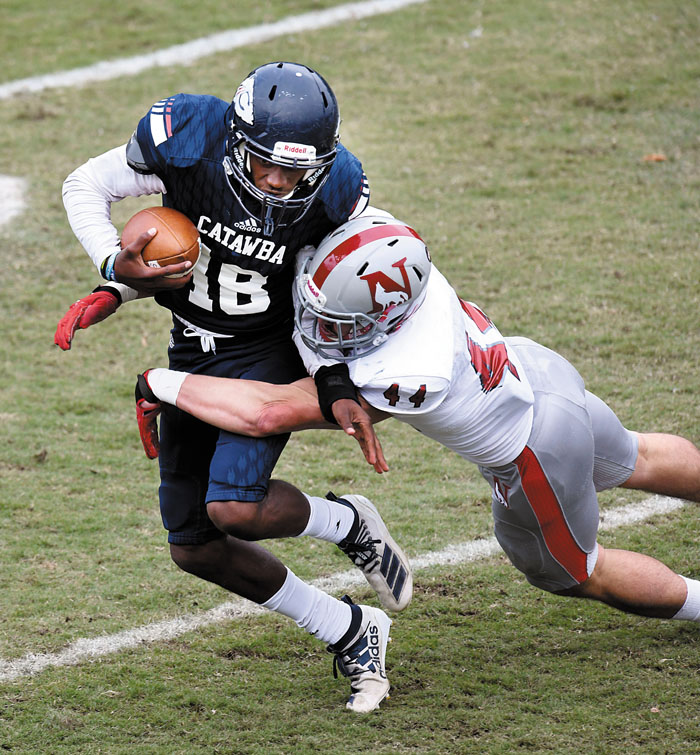 Wayne Hinshaw file photo/for the Salisbury Post ... Catawba freshman quarterback Kaylon Wade (18)is tackled by Newberry’s Sean Connaghan (44), during last Saturday’s game at Shuford Stadium. Wade made his debut in the game, due to an injury to QB Kendall Davis.

The good news is that Wade, a true freshman who came to Catawba from Kings Mountain High, isn’t a typical No. 3 quarterback. He’s young, but he’s talented and highly regarded and was hand-picked by offensive coordinator Dustin Ward during last winter’s recruiting efforts. He’s a guy the Indians really wanted and recruited vigorously.

“Coach Ward was at my high school a lot,” Wade said. “Catawba showed all kinds of interest in me.”

There was a reason for that interest. Wade is Kings Mountain’s all-time leader in career passing yards and total offense. He threw 73 touchdown passes in his career and amassed 7,758 yards of total offense (rushing, plus passing). Kings Mountain plays in the 3A classification in a terrific football area — Shelby, Crest, Burns, Hunter Huss, and so on — so those gaudy stats didn’t come against a parade of cupcakes.

Just as important, Wade won a lot, directing Kings Mountain to a 12-3 record as a senior. During 2018 playoff wins against good teams — West Rowan, Statesville and Northwest Cabarrus — Wade looked better and better, and Catawba felt better and better about his future.

“He is a true dual-threat quarterback who can use his legs, but the thing that stands out is he’s a tremendous passer,” Catawba head coach Curtis Walker. “He can get the ball down the field a long way and get it there accurately. He’s thrown some of the prettiest balls in practice that you’ll ever see.”

Ken Avent, who grabbed the job and ran with it during Catawba’s 4-7 2018 season, entered this season as the starter, but he went down with an injury just days before the opener. With Catawba now 1-6 and 0-4 in the SAC and with only four games left, it’s obvious this will be a medical redshirt season for Avent.

Kendall Davis replaced for Avent and performed well enough for the team to win. He’s not the reason Catawba is 1-6. But Davis took two hard licks Saturday in the 44-21 South Atlantic Conference loss to Newberry. A shoulder injury might keep him out the rest of the way.

Catawba entered this season believing it had plenty of time to groom Wade for the future behind Avent and Davis. Wade was fine with that.

“Physically, I thought I was ready to play because I had a lot of success in high school and we played tough teams, but I wasn’t prepared as far as knowing Catawba’s system, knowing the offense,” Wade said. “Coach Ward, Ken Avent and Kendall Davis have all helped get me more prepared.”

Catawba also wanted to put more pounds and muscle on Wade, so the 6-foot, 170-pounder could take the hits that are part of competing at the college level.

But Wade’s redshirt season transformed into a blue-jersey season on Saturday when Davis went down, and Catawba coaches believed Wade offered the best chance for success.

Wade went into the game and immediately lost a fumble. He wasn’t hit. He just dropped the ball on the ground.

“I was in shock when I went in there,” Wade said. “Very nervous. Lots of jitters. My first college experience came suddenly.”

As disappointing as that turnover on Wade’s first snap was, his coaches and teammates rallied around him.

“The first thing I did when he came to the sideline was to make sure he knew everything was going to be OK,” Walker said. “I let him know we were all behind him, and his teammates did as well.”

Those teammates told him to keep his head up, that they had his back.

“It got a lot better after that first play,” Wade said. “And it got a lot easier.”

Wade finished 3-for-8 for 32 yards, and two of his four carries were sacks. But he showed a lot of tenacity, coming back from that immediate disastrous play to throw a nice 12-yard touchdown pass to Chylon Thomas early in the fourth quarter.

“There’s no experience like game experience, and we wish he had more of that,” Walker said. “We wish he had more weight on him. We wish a lot of things, but we also know he’s a special young man. He got better with every snap he took on Saturday and he’s getting better with each practice rep this week. We believe he’s a quarterback who can execute our offense at a high level.”

If Catawba’s quarterbacks all are healthy next year, the Indians will have three capable, smart athletes available who have started games. That’s going to be an interesting situation, to say the least.

But that’s next year. Right now, the Indians, who have lost five straight since winning at Winston-Salem State way back on Sept. 14, just need to find a way to win a football game.

Wade should give them a chance on Saturday when the Indians play their homecoming game against the Mars Hill  Lions (4-3) at Shuford Stadium at 1:35 p.m.