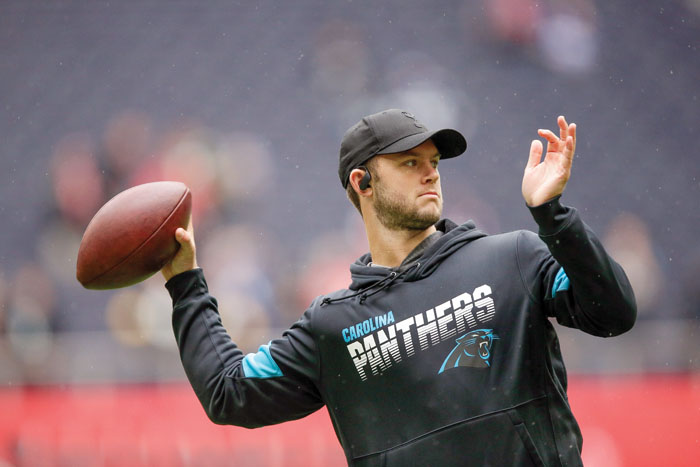 CHARLOTTE (AP) — The Panthers are back from the bye week and Kyle Allen will be back at quarterback.

Coach Ron Rivera ended any potential suspense over his quarterback situation Monday by declaring Allen the team’s starter when the Panthers visit the unbeaten San Francisco 49ers this Sunday.

Allen is 4-0 as Carolina’s starter this season since taking over for the injured Cam Newton.

Rivera said Newton will work with trainers this week at practice, but wouldn’t say how much — if at all — the 2015 league MVP will practice. Newton has missed four games with a mid-foot sprain and hasn’t practiced since a Week 2 loss to Tampa Bay.

Rivera said Newton has been “tremendous” and has done everything the team has asked of him while rehabbing his foot.

“He will be with the trainers and will be out there doing the things we need him to do,” Rivera said. “We’re not going to put any pressure on Cam. He has gone above and beyond as far as working with the other quarterbacks and helping them along the way.”

Rivera said the injury has been difficult on Newton, but added “at the end of the day we’ve got to be smart and make good decisions going forward.”

The Panthers (4-2) return to practice Tuesday.

Rivera said this will be Allen’s biggest test yet.

He’ll face a 49ers’ front seven that is loaded with former first-round draft picks and ranks No. 1 in overall defense. San Francisco is also first in pass defense, allowing just 133.5 yards per game through the air while yielding just 10.7 points per game.

Rivera said it’s unclear if Newton will travel with the team this weekend. He has not been on the sideline for Carolina’s past four games, as the team has not wanted him to be needlessly standing on his foot for several hours.

Rivera said Allen is getting more and more comfortable the more he’s played.

“The more he plays, the more comfortable he gets and the more his confidence builds,” Rivera said. “You see quick decisions, you see quick feet. And that’s been huge. And probably the one thing I appreciate is that he’s learning to protect the ball better.”

Allen has not thrown an interception this season, but has turned the ball over four times on fumbles.