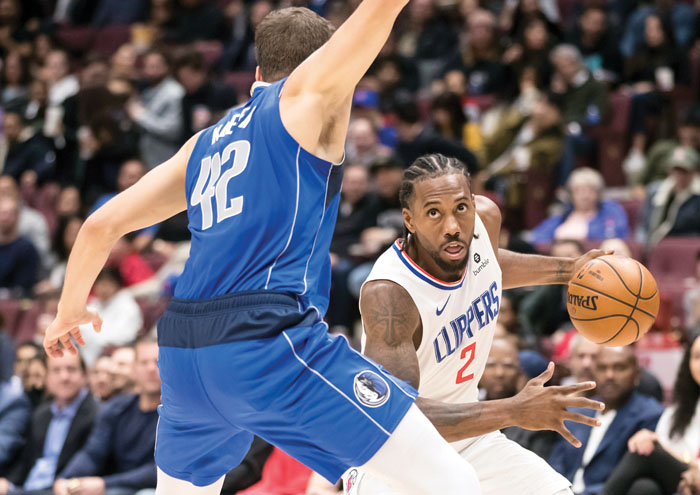 For five years the NBA Finals have returned to the same spot, the longest run ever in one Western Conference location.

LeBron James and Anthony Davis want to bring them back to Los Angeles.

So do Kawhi Leonard and Paul George.

With the Warriors weakened and powerhouse pairs popping up all over the place, the 2019-20 NBA season, unlike many in recent years, is a suspense story.

Both L.A. teams will try to give it a Hollywood ending.

When a whirlwind of player movement was finished, the real winner, as James noted, was Staples Center, which is now home to two title contenders in the Lakers (the way it used to be) and Clippers (the way it’s never been.)

“I agree with what Bron said,” George said. “The Staples Center is where you want to be with the team we got and with the team they have.”

The finals’ Western Conference headquarters had moved north in recent years, with Golden State building a dynasty in the Bay Area. But Kevin Durant is gone, Klay Thompson is injured, and even Stephen Curry’s sharpest shooting might not be able to keep the run going.

It wasn’t good enough last season, when Durant and Thompson were hurt in the finals and Leonard led Toronto to its first championship.

Leonard then joined fellow Southern California native George with the Clippers, who have never even gotten out of the second round but are now considered title favorites. Davis was traded to the Lakers, who loaded up quickly after flopping in James’ first season.

Those teams meet Tuesday on opening night, when the regular season gets started after a turbulent preseason overshadowed by tension between the NBA and China . The Raptors get their rings in the first game before facing New Orleans, whose heavily hyped rookie Zion Williamson injured his knee late during exhibition play.

Toronto lost two starters to Los Angeles, with Danny Green signing with the Lakers. That could open the door for MVP Giannis Antetokounmpo and the Milwaukee Bucks, or the Philadelphia 76ers to seize the East title.

The wide-openness of the league this season is a far cry from recent years, when travel plans to the Bay Area in June could be assumed months in advance, or when James’ teams in the East went to eight straight NBA Finals.

“You can’t call who the NBA champion is,” Hall of Fame player and TNT analyst Reggie Miller said. “Before you would have three, four teams that were deadlocked. You know they’re going to be there. This year, given no injuries, a team getting hot, chemistry obviously issues, there’s a lot of teams that can go for it. But the Lakers and Clippers being headliners.”

They’re hardly alone among the contenders out West. Denver, Portland and Utah all figure to be tough. And don’t count out the Warriors, who’d like their new Chase Center in San Francisco to be the same spring destination that the Oracle Center in Oakland was.

This season, that will be harder than ever.

“The West is stacked all the way up and down,” Curry said.

Some other things to know about the NBA season:

Houston acquired Russell Westbrook to join James Harden, putting two recent MVPs in the same backcourt. Westbrook’s next triple-double will be his 139th and break a tie with Magic Johnson for second on the career list, while Harden will be aiming for a third straight scoring title after averaging 36.1 points last season.

NBA coaches will have a chance to get calls overturned as the league implemented a coach’s challenge on a one-year trial basis. Each team is allowed one per game and can challenge either a foul called on its own team, the call of an out-of-bounds violation, or a goaltending or basket interference violation.

Golden State’s NBA Finals streak is the second-longest in NBA history, behind only the 10 straight trips by the Boston Celtics from 1957-66. The Warriors’ hopes of extending it could depend largely on the play of guard D’Angelo Russell, an All-Star last season in Brooklyn who was acquired when Durant went to the Nets.

Among the games of note in which a player will be returning to his former home:

The Clippers have never even played in a conference finals, but they’re the favorites of both oddsmakers and NBA general managers. With Leonard and George on the wings, a potent bench and one of the league’s best coaches in Doc Rivers, it’s easy to see why.

“It’s not about what people think or what they picked, it’s about the work we do and what our mindset is going to be,” Leonard said. “If we don’t want to win then we’re not going to win. If we want to, then we have a big chance to win.”