MLB umpire Eric Cooper dies at 52; did playoffs 2 weeks ago 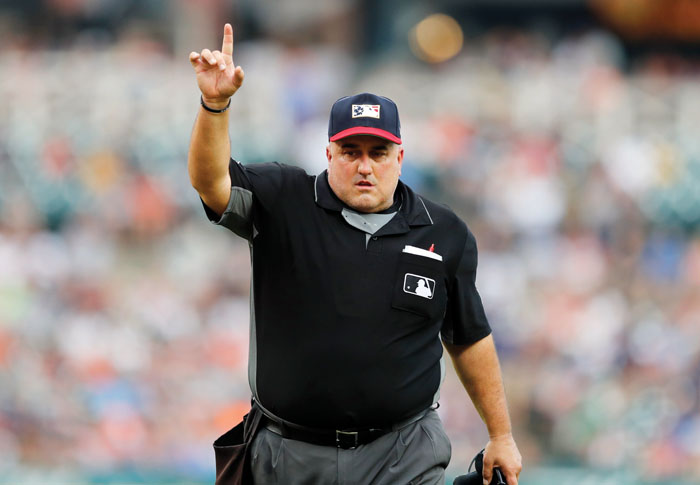 In this July 5, 2019, photo, home plate umpire Eric Cooper signals during the third inning of a baseball game between the Detroit Tigers and the Boston Red Sox in Detroit. Cooper, the Major League Baseball umpire who worked the AL Division Series two weeks ago, has died. He was 52. Commissioner Rob Manfred announced Cooper's death Sunday, Oct. 20. Cooper died after having a blood clot. (AP Photo/Carlos Osorio)

Eric Cooper, the Major League Baseball umpire who worked the AL Division Series two weeks ago, has died. He was 52.

Cooper died after having a blood clot. He had knee surgery earlier in the week and was recuperating at his father’s home in Iowa. Popular with his fellow umps, he was talking to them Saturday about his recovery.

Cooper made his debut in the majors in 1996 as a minor league fill-in and joined the big league staff in 1999.

His most recent assignment came in the playoffs this month when he worked the New York Yankees’ sweep of Minnesota in the ALDS. He was at second base on Oct. 7 for the clinching Game 3 at Target Field.

Cooper worked the 2014 World Series between the Kansas City Royals and San Francisco Giants. He drew that post helped by his success rate on replay challenges — MLB took those numbers into account in picking the crew, and Cooper had only three calls reversed all season.

He also was behind the plate for three no-hitters — two by Mark Buehrle, including a perfect game, and another by Hideo Nomo. Cooper worked the plate in the final game in the career of Cal Ripken Jr.

“This is a very sad day across Major League Baseball,” Manfred said in a statement. “Eric Cooper was a highly respected umpire, a hard worker on the field and a popular member of our staff. He also served as a key voice of the MLB Umpires Association on important issues in our game.”

In a statement, players’ union chief Tony Clark said: “Eric Cooper’s friendly and familiar presence in the baseball community will be missed by all of us. He was a professional and gentleman whose passion for our game, the players and his fellow umpires was evident in the way he went about his work and life.”

Cooper was an Iowa native and Iowa State graduate. He was known for rooting for another school — Notre Dame, and frequently wore Fighting Irish gear in the umpires’ locker rooms while talking about the football team’s success.

HOUSTON (AP) — Justin Verlander will follow Gerrit Cole and start Game 2 of the World Series for Houston against Washington on Wednesday.

Zack Greinke will start for the Astros on Friday when the Series resumes at Nationals Park.

“Greinke gets to hit. That’s going to be fun for him,” Astros manager AJ Hinch said Monday.

Greinke has a .225 batting average with nine homers, including three this season for Arizona before he was traded to Houston on July 31.

Houston plans a bullpen game for Game 4 on Saturday.