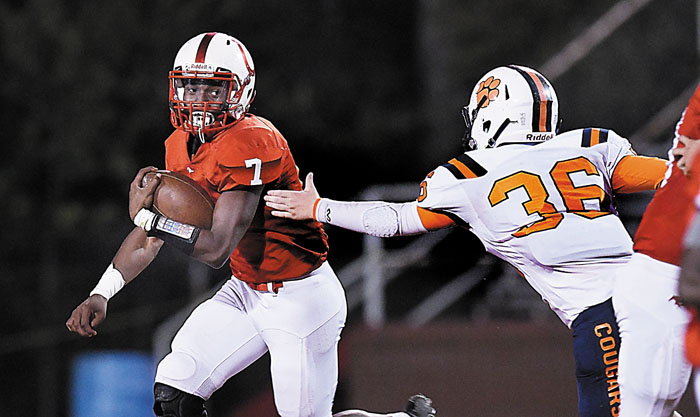 GRANITE QUARRY — East Rowan junior Vincent Jones, normally a receiver and kick returner, got a surprise when he reported to practice last week.

Jones and junior running back Sammy Pinckney were informed they would be taking shotgun snaps against Carson. The plan was for East to use the “Wildcat” formation. If things went well out of the gate, the Mustangs would employ it all night long.

Jones heart beat a little faster. His eyes got a little wider.

“I wasn’t concerned about the running part,” Jones said. “But I’ve never played quarterback, so I’ve never taken snaps before. That was the part that worried me.”

“We talked about it and I really I liked the idea,” East head coach John Fitz said. “You try to fit a game plan to the personnel that you have. We knew we weren’t going to have our quarterback (Logan Forbis), and we don’t really have a backup quarterback. Sammy (Pinckney) had been running the ball 40 times every Friday, anyway. So why not go ‘Wildcat’ all they way and see what Sammy and Vincent could do. They’re not just great athletes. They’re also conscientious kids. You can coach them. They’re going to try to do whatever you ask of them.”

The attraction of the “Wildcat” formation — a direct snap to a non-quarterback who is lined up at the quarterback position — is that it changes the football math. Since no quarterback is needed to hand the ball off or to pitch it, there’s an extra offensive player, an extra blocker. If teams make prudent use of that extra blocker, they can have a productive play.

Even NFL teams will employ the “Wildcat” now and then as a change-up.

East’s plan for an entire game of “Wildcat” snaps, however, was highly unusual.

Jones is an exceptional athlete. He plays basketball in the winter and sprints for the track and field team in the spring. He’s powerful for a sprinter at 6 feet, 185 pounds. He’s as muscular as most linebackers.

Most of Jones’ football background was spent as a running back. He ran the ball in middle school. He ran it with great success for East’s jayvees.

But Jones is in the same grade as Pinckney, the East workhorse who leads Rowan County in rushing yards, so the Mustangs converted Jones to wide receiver.

He has excellent hands and was getting the job done as a wideout, even on a team that doesn’t put the ball in the air much. He had two touchdown catches against North Rowan and had single TDs in the games with East Lincoln, South Rowan and Mount Pleasant. West Rowan prevented him from catching a touchdown pass, but he returned a kickoff  85 yards for East’s only touchdown.

Taking all those things into consideration, East’s coaches were ready to give Jones a chance to take about half of the “Wildcat” snaps against Carson, with Pinckney getting the rest.

With no quarterback, East would add a receiver to its lineup, forming a blocking trio on one side with the tight end and another receiver.

Practice with the new formation didn’t always go smoothly. Jones, who is relatively tall for a running back, worked hard at running lower to the ground.

“The running part was pretty easy for me, but I kept fumbling the snaps,” Jones said. “I knew if I could get the cadence down and take the snaps cleanly I could get some yards.”

Jones improved as the week wore on. His teammates got behind him. East’s offensive linemen and receivers were enthusiastic about the surprising game plan. Fullback Bryce Carden, who would be leading the way for Pinckney or Jones on virtually every snap, was excited about it. East’s receivers were excited about the plan and excited about having Cooper Wright back. He’d been out since the second week of the season with a collarbone injury.

“The kids were pumped up about what we wanted to do,” Fitz said. “Any time you’re trying something different, kids get excited.”

Prior to the game at East, everyone had extra words of advice and encouragement for Jones. Pinckney had a little snap-taking experience, but Jones had zero.

“The coaches told me to take deep breaths and to have confidence in myself,” Jones said. “I just had to believe in myself.”

When the lights came on, there were no more fumbled snaps for Jones. Just lights-out running. He and Pinckney constantly rotated. It worked just the way East’s coaching staff had drawn it up on the chalkboard. The ball was in the hands of one of East’s two most dynamic players on every snap, and they rolled for serious yardage. The blockers in front of them did their jobs.

“Our first possession, we went right down the field and scored,” Fitz said. “That didn’t hurt any. Our kids believed in what we were doing.”

With East leading 12-7 in the second quarter, the Mustangs surprised the Cougars with a pass. Pinckney hit Wright on a slant, and the county’s 400-meters champ, was gone.

“Sammy and Vincent both have great arms, they’ve got cannons,” Fitz said. “They don’t have experience, but they are a threat to throw it, and we need them to be a passing threat. That ball Sammy threw to Cooper Wright was a heck of a throw.”

East led 25-14 at halftime. Carson got a field goal to start the second half and was only down eight points, but that’s when Jones broke a 31-yard scoring run that was one of the key plays of the game.

“Carson made defensive adjustments at halftime,” Fitz said. “They showed us three different fronts, tried hard to stop us, but our guys up front did a great job.”

The Mustangs continued to build on the lead and won, 53-30. Pinckney would rush for 272 yards and five touchdowns, his third 200-yard game of the season.

Pinckney would have company in the 200-yard club. Jones, who had carried the ball only twice this season prior to Friday, amassed 275 yards.

West Rowan had the first pair of 200-yard rushers in county history a week earlier. Now East has done it.

The Mustangs did it in a different way, but they did it.

“Being kind of tall helped me,” Jones said. “I could see those big holes opening up for me as soon as I took the snap. Most of my runs were between the tackles, just seeing where the hole was and following our fullback.”

East hopes to get Forbis back before the end of the season. Until he can return, it’s going to be 100 percent “Wildcat” for the Mustangs.

Spirits were high at Monday’s practice.

“Our guys like beating Carson,” Fitz said with a smile. “They’re upbeat. They know there’s another big conference game this week.”

East (4-4, 1-1 North Piedmont Conference) was in contention for the league title right down to the last Friday of the regular season last year and might be again if it can win at South Iredell this week.

The Mustangs will be homecoming guests, but they’ll try to spoil the festivities with more “Wildcat” magic from Pinckney and Jones.