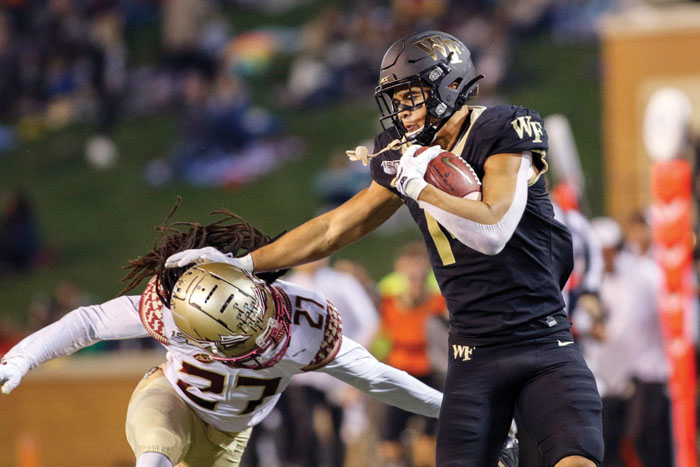 By JOEDY McCREARY AP Sports Writer
WINSTON-SALEM (AP) — Whether a close game or a blowout, Wake Forest always seemed to find a way lately to lose to Florida State.
This time, the Atlantic Coast Conference’s highest-scoring offense found a way to beat the Seminoles — by kicking a bunch of field goals.
Nick Sciba kicked a 25-yard field goal — his school-record-tying fifth of the game — with 4:18 remaining, and Wake Forest beat Florida State 22-20 on Saturday night.
“It stinks that our offense wasn’t able to get in the end zone, but I’m glad that I was able to do my part and do my job in order to help us get a great team win, which I think was a big, pivotal win for us,” Sciba said.
Cade Carney had a 3-yard touchdown run on the second play of the fourth quarter, Sam Hartman was 21 of 38 for 308 yards in his first start of the season and Sage Surratt had seven catches for 170 yards — his fourth game of the season with at least 150.
The Demon Deacons (6-1, 2-1), who average an ACC-best 39.7 points and 540.5 total yards, were held to a season-low point total. Yet they won a game with three lead changes in the fourth, snapped a seven-game losing streak in the series and bounced back from their record-setting 62-59 loss to Louisville.
Wake Forest lost its previous two home games against Florida State by a combined 15 points, and lost by 21 in Tallahassee last year. This was just its second victory over the Seminoles since 2008 and first since 2011.
“We’ve had some good wins here over the last 3-4 years, but I thought that was as gritty of a win as we’ve had,” coach Dave Clawson said. “Just kind of refusing to give up and finding a way.”
James Blackman put the Seminoles (3-4, 2-3) up 20-19 with his 36-yard touchdown pass to Tamorrion Terry with 11:22 to play.
Florida State had the ball twice after Sciba’s final field goal. Ricky Aguayo was wide left on a 50-yard field goal into the wind with 2:13 remaining. After the Seminoles forced a stop and got the ball back with 35 seconds left, Blackman fumbled the final two snaps. He recovered them both, but the last one ended the game.
Florida State has lost two straight Atlantic Division games after winning three in a row.
“That one hurt,” coach Willie Taggart said. “Big-time.”
Cam Akers rushed for 157 yards behind a beaten-up offensive line and scored two touchdowns, rushing 2 yards for a score before taking a slick crossing pass from Blackman 19 yards for another TD for the Seminoles.
Blackman finished 27 of 43 for 280 yards with the two scores for Florida State after Taggart played it coy by declining to say whether Blackman or Alex Hornibrook would start against the Demon Deacons.
The second half was played in a persistent shower with Tropical Storm Nestor churning its way across central North Carolina.
THE TAKEAWAY
Florida State: The Seminoles sure didn’t look like they have the second-worst total defense in the ACC, allowing 464.5 yards per game. They bowed up and held the Demon Deacons out of the end zone on 13 of their 14 possessions, holding them to field goals five times inside the 10. But the offense turned it over twice and just couldn’t put one more score on the board when it needed one.
“We say this every week but it’s true — can’t turn the football over,” Taggart said. “We’ve got to take care of the football. We didn’t do a real good job of that, and we turned it over in critical situations.”
Wake Forest: Turns out the Demon Deacons could beat Florida State with a bunch of 3s and only one touchdown. A week after putting up 59 points in a losing effort against Louisville, the Demon Deacons struggled to score touchdowns in the red zone, settling for those five Sciba field goals in addition to the Carney touchdown. Their last three games have been decided by a combined eight points — but this one could have been a lot more lopsided.
ROSTER SHUFFLE
Taggart had to repeatedly reshuffle his lineup on both sides of the ball due to injuries and a targeting flag on his top tackler. The Seminoles lost safety Hamsah Nasirildeen to a targeting flag on their first defensive series. And among the handful of Florida State players who went down with injuries of varying severity were starting center Baveon Johnson, left guard Brady Scott and receiver Ontaria Wilson.
SAM’S START
Hartman started the first nine games as a freshman in 2018 before suffering a season-ending leg injury. Jamie Newman took over and did nothing to relinquish the job, leading the Demon Deacons to a 4-1 finish last season and rolling up an ACC-best average of 341.2 total yards through six games before injuring his left shoulder in the second half against Louisville. He watched from the sideline in sweats.
HE SAID IT
“Instead of reading about how we can’t beat Florida State, now you guys can write again how we don’t win after a bye week.” — Clawson, whose teams in six seasons at Wake Forest have never won its first game after a week off.
UP NEXT
Florida State: Plays host to Syracuse on Saturday.
Wake Forest: Plays host to North Carolina State on Nov. 2.
___
More AP college football: https://apnews.com/tag/Collegefootball and https://twitter.com/AP_Top25