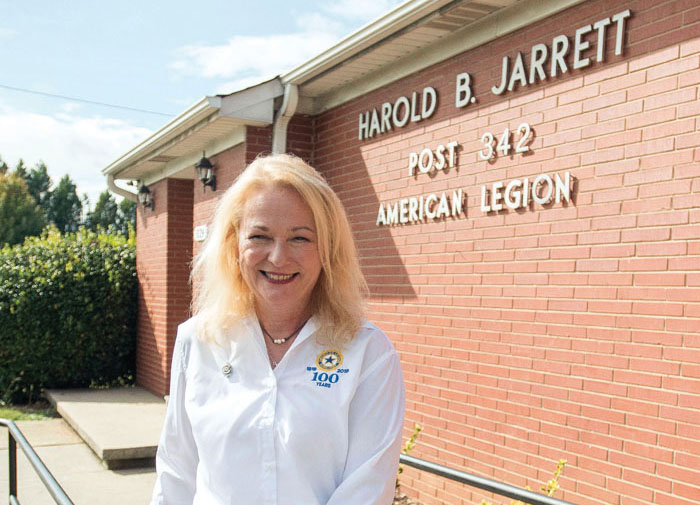 SALISBURY — The year Julie Smith served as membership chairman for the Department of North Carolina American Legion Auxiliary she added 613 new women to the organization’s roster.

As she traveled across the state, attending division, district and unit meetings, then vice president Smith often dressed as Rosie the Riveter, that famous poster campaign recruiting women to fill the factory jobs of men during World War II.

Smith used the slogan “We Can Do It” for her own membership drive.

“You gotta have fun,” she says.

Today, Smith is several months into her yearlong term as president of the 5,000-member state American Legion Auxiliary, and it’s a momentous year, taking in the 100th anniversary nationally.

Smith’s official “homecoming” Nov. 10 in Salisbury will celebrate that national centennial at her home unit, the Harold B. Jarrett American Legion Post 342 at 1024 Lincolnton Road.

“It’s not about me,” she says of being state president, a position which also doubles as the organization’s chief executive officer. “It’s about serving the veterans. That’s what inspires me.”

At present, the North Carolina Department has 161 local units within 15 districts and three divisions, and the auxiliary as a whole is considered the largest women’s patriotic organization.

Smith definitely stands as one of the bookends to the state auxiliary’s history.

Another Salisbury woman, Lily Burt, a member of the Samuel Hart Post 14 auxiliary, served as the state’s first president (then called commander) from 1920-22.

Burt thought the auxiliary’s overriding duty should be to serve disabled veterans of World War I in the VA hospitals. Interestingly, this was 40 some years before Salisbury would have its own VA Medical Center.

History is not lost on Smith, who retired in January 2018 after 30 years as a history teacher at East Rowan High School.

For her “President’s Project,” an effort chaired by daughter Emilee Sidelinker, Smith has set a goal of raising $20,000 to help veterans coping with post-traumatic stress disorder at VA hospitals in the state.

“The PTSD project is near and dear to my heart,” she says, noting that roughly 30% of the men and women returning from service suffer from the disorder.

The Hefner VA Medical Center in Salisbury has 23 beds for PTSD patients, and Smith is hoping her project’s money can purchase sound machines as sleeping aids.

VA hospitals in Asheville and Fayetteville have arts and crafts programs for PTSD patients, while the Durham VA Medical Center employs recreational and music therapy in its treatment, and Smith aims to help all of those efforts, too.

Her department president’s theme is simple: “A Hundred Years of Service,” and she feels energized by all the auxiliary members she meets across North Carolina.

“I feel like people have embraced me,” she says. “They catch the enthusiasm, and it feeds me more.”

Smith’s rise to the state auxiliary’s presidency has been a fast one, to say the least, and a combination of American Legion baseball and Girls State jumpstarted it.

During a summer ballgame and at the urging of cousin Lynn Coughenour, Smith decided to join the auxiliary 17 years ago. Smith’s grandfather, James L. Hearn, served in World War I; her father, James E. Hearn, fought in the Philippines during World War II.

Auxiliary members have to be a daughter, wife, sister, mother, grandmother, spouse or granddaughter of a veteran.

But Smith was not heavily involved in the auxiliary until 2008, when her then high school-aged daughter, Emilee, wanted to attend Tar Heels Girls State, a program provided by the state auxiliary and often held at Catawba College.

Emilee interviewed with auxiliary members, then attended a meeting with her mother at the Harold B. Jarrett Post the following Monday. Mother and daughter became immersed in the organization’s service mission.

Both have been secretaries for the local unit. From 2010-2015, Julie served as unit president, and she also has held vice presidential roles after that.

Phyllis Richardson encouraged her to go farther in the organization, and soon Smith was District 9 president, then Division 2 president, while attending state and national conferences and conventions.

Smith kept rising through the ranks, becoming a state officer who was appointed chairperson of the Americanism Committee and the VA & R (Rehabilitation) Committee.

The state auxiliary has close to 20 different standing committees, all requiring chairmen and not counting other special appointments. “I encourage them and support them,” Smith says now from her president’s role.

With her retirement as a teacher, Smith devoted much of her additional time in 2018 to her duties as state vice president and the membership campaign.

In June of this year at the state convention, Smith was elected department president by a voice vote. Since then, she has been traveling to a lot to meetings and making friends of auxiliary members across the state.

Division meetings are in the fall; district meetings, in the spring. Smith must preside over the fall and mid-winter conferences, along with next June’s state convention, where she will most likely be succeeded by Vice President Jill Puett.

The state auxiliary normally has one paid staff member in Raleigh. When Smith became president, that position was vacant, and she worked with the human resources committee to hire two-part-timers who are still in place.

As the auxiliary’s CEO, Smith quickly discovered she was responsible for their time sheets and making sure they were paid.

Smith grew up in China Grove and is a graduate of South Rowan High School and Catawba College. She earned her master’s degree from the University of North Carolina at Charlotte.

She and her husband, Robert, will soon be married 38 years. The couple live in the Milford Hills neighborhood of Salisbury.

For years, she served in Newman Park’s concession stand with Harry Agner and Pinky Trexler, who was famous for his ballpark hot dogs. Smith thinks she is the only person trusted with Trexler’s recipe for goulash.

Smith’s passions are her daughter, now 28 and married to serviceman and nuclear engineer Adam Sidelinker, and her grandson Jayse, 5, who belongs to Sons of the Legion.

The Sidelinkers presently are stationed in Saratoga Springs, New York.

The state auxiliary traces its own official founding to Oct. 25, 1920, in Greensboro, when the American Legion Executive Committee voted to organize a women’s auxiliary.

Two women’s auxiliary units already were chartered in April of that year — one in Winston-Salem, the other in Raleigh.

Smith stresses it is never right to call the auxiliary a women’s auxiliary — the organization dropped the “women’s” categorization in the mid 1920s. And especially now, a new rule designed to increase membership will allow spouses of women members to join.

As with many venerable service organizations, maintaining and growing membership continues to be a challenge for the auxiliary.

The Harold B. Jarrett Auxiliary Unit 342 has annual membership dues of $30, of which $22.50 goes to the state office. “I find it an honor to work beside (Post Commander) Charlie Frick and the other Legionnaires,” Smith says.

Auxiliary Unit 342 has 89 members, who faithfully provide activities for VA patients and other community service projects as a whole, such as blood drives and holiday events for special populations children.

They meet twice a month at the post, a tradition not followed by most units in the state which meet only monthly, but it’s one that Smith admires.

“I think we’re one of the best-kept secrets,” she says.