From El Salvador to Salisbury, Jagshead keeps coffee in the family 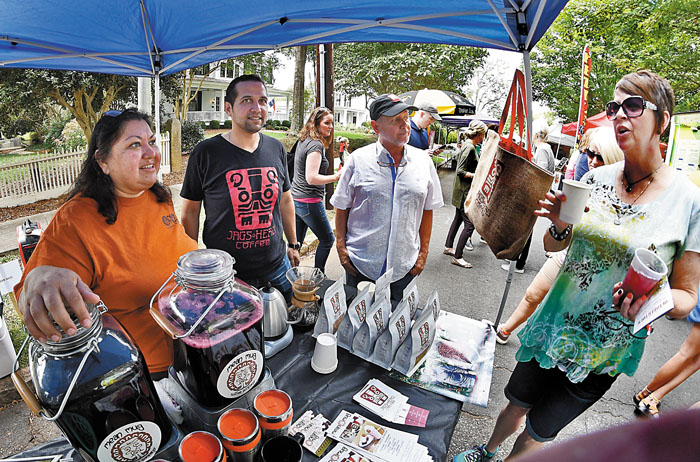 But the family that runs the business has roots that date back much longer, more than 100 years.

Based in Charlotte, the coffee roasting company sells their products to various shops and businesses within the area, including downtown Salisbury’s Mean Mug and Koco Java.

Andres Trigueros is the company’s co-founder, and he represents the fourth generation. His father, Tomas Trigueros, is the third generation in the family coffee business, which has its roots in El Salvador. Both Tomas and Andres recently stopped in Salisbury for OctoberTour, where they had the opportunity to meet those who’ve purchased their coffee.

What many people do not realize is that coffee is grown on a tree like cherries, Andres said. There are two seeds in a cherry. And the coffee beans are handpicked to ensure quality, said Andres.

“It takes one year to grow coffee,” Andres said.

He began roasting primarily in the Charlotte market and later expanded to Salisbury this year.

“(I’ve enjoyed) being able to spend time with Evelyn (Medina) and all of the people in Salisbury. It’s a beautiful town,” Tomas said in an interview during OctoberTour. 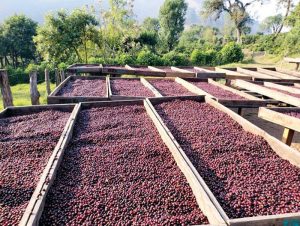 He talked about how the family business came about in a phone interview with the Salisbury Post.

“My family has been growing coffee in El Salvador for four generations. My father farms, and much of the land he farms on has been inherited,” he said. “Everything we receive is from my Dad’s farm, grown on San Toro Volcano in El Salvador.”

Their oldest farm is Loma de Paja, while the newest farm in El Salvador is El Cipres.

The name for Jagsheads Coffee was inspired by the family finding an ancient mayan rock on their oldest farm. The rock is over 3 feet tall and is said by Jagheads Coffee to be associated with a series of Mayan artifacts found in a region, known as “Cabeza de Jaguar” which translates in English to “Jaguar Head.”

Andres said that the idea for the opening Jagheads Coffee was presented by his father, Tomas.

“He proposed the idea to me and my brothers, and we found it quite interesting,” Andres said. “He thought of the idea after being in Portland and having been fascinated with the idea of turning a coffee bean into coffee. Coffee farmers are often at the bottom of the supply chain, and take a larger risk. To keep our family in the industry, we decided to integrate our farm with a roastery.”

Andres described how the “farm-to-cup” experience is different than some other farms.

“When it comes to coffee, and the way coffee is traded, most coffee producers sell to the mills,” he said. “The mills then sell to an exporter, the exporter then sells to a roaster and the roaster might sell to a coffee shop or consumer. We are able to process our own harvest and deliver it directly to the consumer. Anyone who buys coffee from us is buying it directly from the farm.”

Trigueros also coined the coffee made from coffee beans grown and harvested through Jagshead Coffee as “easy to drink” by already having a sweet flavoring and often not requiring the addition of creams and sugars.

“We ensure that every bean was picked at the right ripeness level, was processed properly at origin and was not blended with other farms,” he said.

The Trigueros family dreams of continuing the family business for many generations to come, Andres said.

“We already have my brother’s children in love with coffee. They love to see the machines and the coffee roasting in it. They also love when they go to the farms they most definitely enjoy it,” he said.

Andres said he often returns to El Salvador, about three or four times per year, in order to visit his mother, Elsa Mendez, and his father, Tomas.

“It’s one of my most favorite places,” he said.