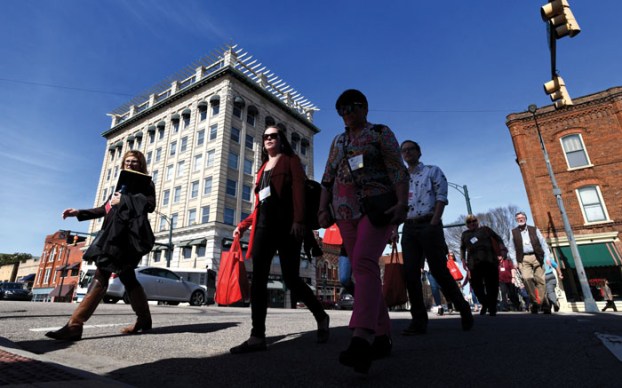 By many measures, Salisbury has a thriving downtown.

Storefronts are more full than they’ve been in the recent past. Property owners are renovating buildings to add businesses or apartments to the city’s stock. And the stable of existing restaurants and shops make a trip downtown an enjoyable way to spend an afternoon.

But there are still challenges.

There are a number of popular downtown food options in Salisbury — Go Burrito, Smoke Pit, the Salty Caper and Sidewalk Deli, to name a few of many — but the city is subject to the same cycle of small business churn as other communities across the country.

While our downtown is more full than it’s been in the recent past, there are still empty storefronts that dot Main and Innes streets, whether because of lease prices, a lack of interest or any number of other factors. Because of the age of the buildings in our downtown, some need repairs before new businesses can move in.

The Empire Hotel is both a challenge and a tremendous opportunity. It is the subject of renovation plans that have momentum, but skeptics will rightly argue that plans have been discussed for years with no clear date set for the start of construction. Because of the cost of the renovation, securing capital remains a hurdle. Once complete, however, the Empire will add much-needed housing to downtown. It also will be a gem for the city, county and region.

There are plenty in the Salisbury area who might count parking as a challenge, but there are lots of leftover spots most days and the Bell Tower Green, which significantly reduced the city’s parking stock, will be a one-of-a-kind public park.

Said simply, Salisbury is in the midst of a downtown revitalization that’s occurred organically and there’s more work to do for the city to reach its full potential. In the form of outside ideas and investment, it could use some help in doing that.

A group of local people are advocating for Salisbury to be chosen for a series named “Small Business Revolution” — created by the Deluxe Corporation, a financial services company based in Minnesota. The show chooses one town per season and six of its small businesses to win a $500,000 revitalization. And we agree that Salisbury is a good candidate.

As the series states on its website, it’s “on a mission to help small businesses, and in turn, those small towns, reignite the spark that drives them and keeps people coming back.” There’s kindling in the form of the Empire Hotel, the Bell Tower Green Park, ongoing and recently completed renovations to downtown buildings by private owners and expected funds to repave Main Street. Consider, too, resources such as a city owned fiber-optic internet system and close proximity to two of the state’s largest metropolitan areas.

While the series, for example, won’t be able to directly make the Empire Hotel’s redevelopment a reality, it can help through renovations and other projects that increase the attractiveness of surrounding storefronts.

That the local business climate isn’t starting from zero should be seen as a benefit. A spark from Deluxe’s series could add energy to a fire already burning in Salisbury and increase the vibrancy of the city’s core.

The ongoing nomination campaign could bring that spark to Salisbury.

The deadline for nominations is Tuesday. And those interested in nominating Salisbury are asked to write a maximum of 500 words about how bringing the show to town would make a difference.

The best way to nominate Salisbury is to visit deluxe.com/small-business-revolution/main-street/season-five.

Leonard Pitts: Why do we often see what isn’t there?

By Leonard Pitts The beam from his flashlight reflects off the glass, so we can’t see what he saw. But... read more