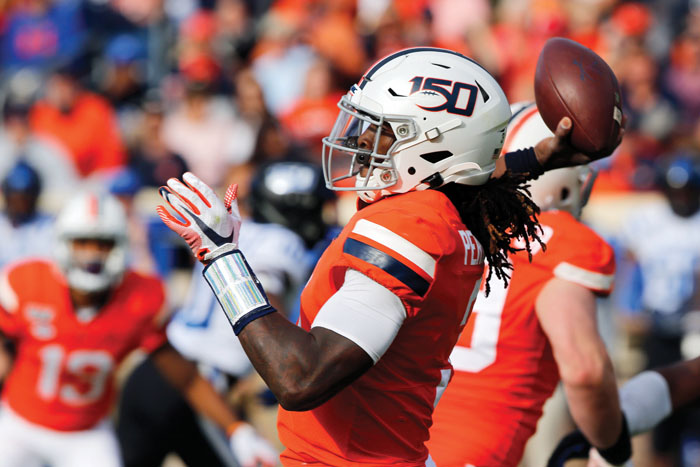 By HANK KURZ Jr. AP Sports Writer
CHARLOTTESVILLE, Va. (AP) — Bronco Mendenhall was at a loss to explain how Virginia’s game against Duke turned into a blowout. So were his players.
“I thought it would come down to the last possession, so holy cow,” Mendenhall said.
Bryce Perkins ran for three touchdowns and Wayne Taulapapa ran for two as the Cavaliers rolled, 48-14, their fifth consecutive victory against the Blue Devils. Virginia forced five turnovers and has forced 15 in the last four meetings between the rivals.
“Maybe we’re just in the right place at the right time when we play Duke,” defensive end Eli Hanback said.
Hanback had one of three fumble recoveries for the Cavaliers, who scored 20 points off those takeaways.
Joe Reed also returned a kickoff 95 yards for a touchdown, his second scoring return of the season and program-record fifth of his career, and Brian Delaney kicked two field goals a week after his three field goals accounted for Virginia’s only points in a 17-9 loss at Miami.
This time, Virginia had no issues once inside the opponent’s 25, which Taulapapa credited with a “change of mindset.”
“Bryce can’t do everything. He’s amazing in every single way, but he can’t do this by himself,” Taulapapa said.
The Cavaliers (5-2, 3-1 Atlantic Coast Conference), whose loss a week ago dropped them into a tie with Duke and North Carolina in the ACC’s Coastal Division, regained the upper hand on the backs of a defense that set them up for four scoring drives of 34 yards or fewer.
The Blue Devils (4-3, 2-2) came in averaging more than 40 points over their last five games but managed only a 36-yard scoring pass from Quentin Harris to Scott Bracey against Virginia’s front-line defense. Duke gained just 166 yards in the first three quarters before Chris Katrenick replaced Harris for the final 15 minutes. Katrenick hit Eli Pancol with a 23-yard touchdown pass with 2:41 remaining.
“They did a good job getting pressure on us on passing downs, and a good job penetrating the line of scrimmage on run plays,” Harris said. “These type of games happen in football. For whatever reason, we didn’t play our best today and they capitalized on that.”
Harris completed 13 of 26 passes, but for just 88 yards with two interceptions. He also ran eight times for just 37 yards.
Perkins scored on two 1-yard runs and a 3-yard run and Taulapapa scored on runs of 3 and 9 yards. Taulapapa finished with 77 yards on 14 carries and Perkins had 62 on 22 attempts. He also completed 13 of 26 passes for 141 yards with one interception.
THE TAKEAWAY
Duke: The Blue Devils’ fourth first down came midway through the third quarter when the snap to punter Austin Parker on fourth-and-3 from the Duke 32 bounced and Parker picked it up and ran 4 yards. Four plays later, on fourth-and-5, Parker was on again to punt and appeared to be trying a rugby-style kick but instead tucked the ball and ran for 12 yards to the Virginia 46. It was the first time the Blue Devils crossed midfield all game.
Virginia: The Cavaliers caught a break in the first half when Perkins dove over the pile for the end zone and fumbled. Duke players charged out of the pile in celebration, but a review determined that Perkins had broken the plane of the end zone before the ball came loose, giving the Cavaliers a 17-0 lead. It was 27-0 before Harris connected with Bracey late in the third quarter.
ONE MAN SHOW
Perkins was responsible for 152 of Virginia’s 153 yards in the first half. He threw for 111 yards and ran for 41.
UP NEXT
The Blue Devils are on the road again, facing North Carolina on Saturday.
Virginia starts a two-game road trip at Louisville on Saturday.
___
More AP college football: http://apnews.com/tag/Collegefootball and http://www.twitter.com/AP_Top25