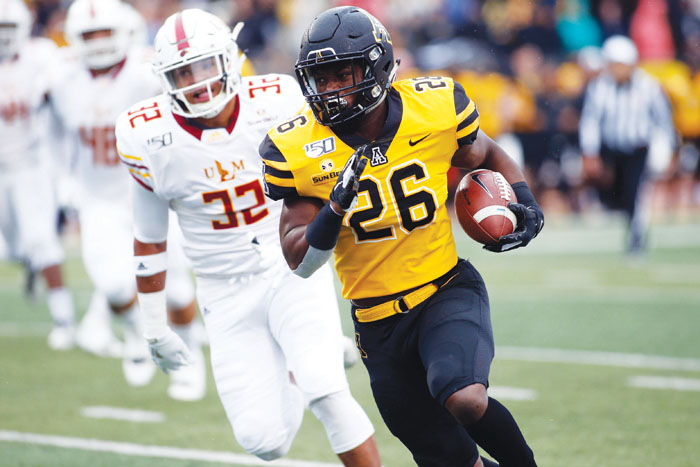 Appalachian State running back Marcus Williams Jr. (26) evades Louisiana Monroe linebacker Chase Day (32) as he runs for a first down during the first half of an NCAA college football game Saturday, Oct. 19, 2019, in Boone, NC. (AP Photo/Brian Blanco)

BOONE (AP) — Appalachian State coach Eli Drinkwitz has a daily reminder for his football team: Do it better than it has ever been done before.

The Mountaineers are working on that.

Zac Thomas threw for 214 yards and three touchdowns and ran for another score and No. 24 Appalachian State beat Louisiana-Monroe 52-7 on Saturday for the Mountaineers’ first victory as a Top 25 team.

The win helped bury the memory of getting blown out by Georgia Southern 34-14 last year just five days after breaking into the AP poll at No. 25, as well as avenge a heartbreaking 52-45 loss to Louisiana-Monroe in the last meeting in 2017.

Drinkwitz said he made his players “well aware” of both losses after posting motivational material all over the team’s building, including on the players’ lockers.

“We were motivated to write our own history and to always compete and do it better than it has ever done before,” said Drinkwitz, who remained unbeaten in his first year as Mountaineers coach.

With the win Appalachian State will become the first Sun Belt conference team ever to be ranked in consecutive weeks.

Appalachian State (6-0, 3-0 Sun Belt) entered the game as one of 12 unbeaten FBS teams in the country, and rattled off 31 straight points in the first half after spotting the Warhawks a 7-0 lead.

Thomas did it all for the Mountaineers.

“It’s an accomplishment to be ranked, but you saw last year we got embarrassed by Georgia Southern,” Thomas said. “So it’s good to get this win under us and still be ranked.”

I think it shows that we can put stuff behind us. All week long we preached not to let the news get too big for your head.”

The Mountaineers limited Louisiana-Monroe’s Caleb Evans to 75 yards passing and had two interceptions.

“We got outplayed in every phase of the game,” said Warhawks coach Matt Viator. “I’m really disappointed because I really expected us to play better.”

The Mountaineers came in as the highest-ranked Sun Belt Conference team in history and did nothing to hurt their ranking, beating a ULM team that was the only other unbeaten team in conference play.

Thomas has been an effective runner for the Mountaineers all season and had 59 yards on six carries and a touchdown against ULM. He also wisely slid to avoid contact on a number of occasions, which has kept him from taking big hits.

“Last I took a lot of dumb hits and I put myself out of the game against Georgia Southern,” Thomas said. “Just watching how I played last year and taking the hits that I was taking that were unnecessary. I’m less sore.”

Drinkwitz said the Mountaineers goal was to run to the opposite side of Louisiana-Monroe defensive end Kerry Starks, who he considers a big-time player and difference maker on defense.

Louisiana-Monroe: The Warhawks took Florida State to overtime earlier this year, but struggled to get anything going on offense after marching 82 yards on 12 plays for a touchdown on the game’s opening drive. Following that drive, they had just 89 yards and no points for the remainder of the first half.

Appalachian State: The Mountaineers offensive prowess has never been in doubt, but now the defense is looking strong, too. This marks the second straight week they’ve held an opponent to seven points. Last week they beat Louisiana-Lafayette 17-7, holding the Ragin Cajuns to 34 points below their season average. “We stopped the run,” Drinkwitz said after the initial touchdown drive. “We were getting bled down the field in the run game, and our D-line wasn’t very physical, nor our linebackers. Those guys just settled down and got used to the game speed.”