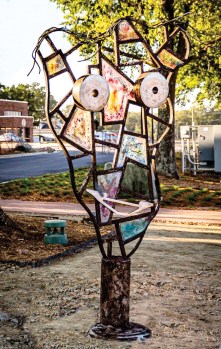 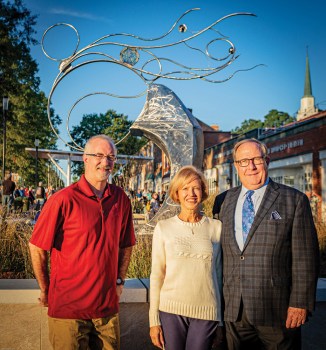 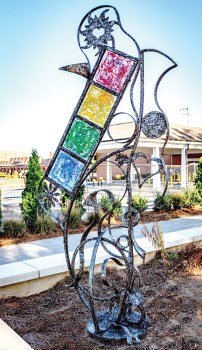 KANNAPOLIS – The city of Kannapolis has received two special gifts. The estate of Dr. Harold Cook and Lynne and Wally Safrit have donated funds to buy two pieces of sculpture. Both sculptures have been placed on West Avenue as part of the new streetscape.

North Carolina artist Tom Risser created both pieces using stainless steel. The Dancers was donated by the late  Cook. The 8-foot-tall sculpture captures two people dancing and it is located near the intersection of West Avenue and Laureate Way.

The Safrits donated the sculpture Releve, which means “to rise.” In ballet, releve is one of the seven dance movements. This 10-foot-tall piece captures the fluid movements of a person dancing. It is located at the West A and West Avenue intersection.

These sculptures are the first pieces of public art in downtown Kannapolis. Two other sculptures by Risser have also been added to the West Avenue streetscape, Smiley, on loan from the artist, and Complex It, which was purchased by the city.

These two pieces are also made of stainless steel that has been aged by the artist. They are located close to the intersection of West Avenue and Vance Street. At 8 feet, Smiley is sure to be an Instagram favorite with children and adults. Complex It is 10 feet tall and has brilliantly colored panels which are meant to capture the sun’s rays.

Cook, a native of Kannapolis, died in 2012, and left instructions with his family to honor the city he loved with a monetary gift.

“Harold loved Kannapolis. He was glad to see the North Carolina Research Campus finished before his death. He loved that the city was coming alive again following the closure of the mill and as a public health professional he was excited about the research underway on the campus. He wanted to do something to help with the rebirth of Kannapolis,” said his cousin, Cindy Calvert. “He loved so many things and one of them was art, so we decided the gift should be a piece of art for everyone to enjoy.”

Cook’s mother and father worked at Cannon Mills, but he took a different path. He attended the University of North Carolina at Chapel Hill where he earned his bachelor’s degree in English. He came back to Cabarrus County to teach elementary school before returning to UNC and completing a master’s degree in social work.

Cook earned doctorates from UNC in public health and philosophy. His career was spent as a medical researcher at rehabilitation centers and as a research assistant and adjunct research assistant professor at  UNC. He published several papers on his work, including patients’ recovery from traumatic injuries, reactions to disability; the effectiveness of self-help groups, trends in programs that assist adult burn victims; continuing education programs for occupational and physical therapists treating arthritis and more.

He was on the Committee on Organization and Delivery of Burn Care for the American Burn Association, the Executive Committee of the Multipurpose Arthritic Center at UNC-CH and was a technical adviser for the North Carolina Arthritis Program.

After he retired, he returned to Kannapolis to care for his mother. He was a member of New Gilead Reformed United Church of Christ and a volunteer for Meals on Wheels and the Cabarrus County Library.

The Safrits are natives of Kannapolis. Both have had careers in the city.  Lynne Safrit was president of Atlantic  American Properties and Castle & Cooke North Carolina for 30 years. Wally Safrit has been the attorney for the city of Kannapolis for 35 years.

“We love the city and the people of Kannapolis,” said Wally Safrit. “When we saw this sculpture, we thought of Kannapolis. She reflects the mood of our city. Our city and this downtown are rising from where we have been and she reflects this ‘releve’ movement perfectly.”

An engineer by day, Risser is president of U.S. Bottlers Machinery Company in Charlotte. He is a graduate of Guilford College with a degree in mathematics and engineering, and an electrical engineering degree from North Carolina State University.

Twenty years ago, he began taking leftover materials from his company’s products and made sculptures. As a self -taught artist, he has experimented with many media, including fused glass, polycarbonate, stone, paintings, shotcrete and photography.

Now an award-winning sculptor, his works are in many cities, galleries, private collections and businesses across the U.S.

In 2016, he had a heart attack and heart bypass surgery. Since then he has incorporated hearts into his work. It has become a signature of his work and can be found in the Kannapolis pieces.

He is also known for his other hobby, skateboarding. He created many local skateboard facilities including WXW Sk8, The Blair Witch Ramp, Whip Snake Park and Tom’s Bowl. He has been featured on HGTV, “Offbeat America,” ESPN’s “Tony Hawk’s Giant Skatepark Tour” and Carolina Traveler.

He and his wife, Daisy, live in Marvin and they have a son, Sam, and a daughter, Carson.

If you would like to make a donation for public art to the city of Kannapolis contact Annette Privette Keller, director of communications at aprivettekeller@kannapolisnc.gov or 704.920.4311.