Hornets back on track with big win at Ledford, 30-6 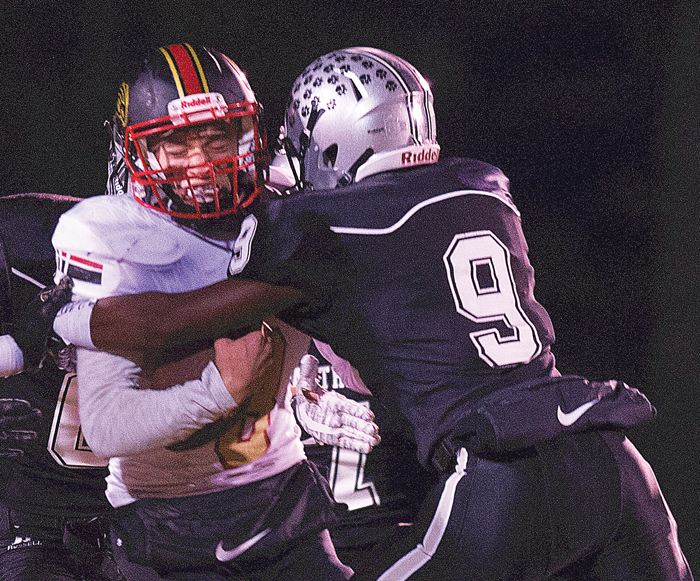 The Hornets scored 27 points in the second half and pulled away from the Panthers to take a 30-6 victory.

Arguably it was the biggest triumph for the program since 2012 when the Hornets outscored Thomasville in a late-season showdown and ran the table when the CCC was a six-team league.

“I  don’t think people thought we had a chance tonight,” Salisbury head coach Brian Hinson said. “I never thought it would be a convincing win. Ledford is a really good football team, a very well-coached football team, but our kids played really well.”

“We just didn’t play well at all at Oak Grove,” Hinson said. “We were better tonight. Our defense was lights out, and we eliminated a lot of our offensive mistakes.”

A defensive struggled was expected. That’s what the first half was. Salisbury finally took a 3-0 lead on a field goal by Wade Robins. He came through with the ice-breaking points from 31 yards out, with 5:51 left in the second quarter.

Those three precious points held up for the halftime lead. Salisbury’s defense limited Ledford to 55 yards in the first half and allowed only one pass completion. Lawon Blackwell had a big interception for the Hornets.

“Down 3-0 at the half, there still were plenty of opportunities in front of us,” Ledford coach Chris Adams said.

Shortly after a Ledford miscue on a punt attempt gave the Hornets the ball at the Ledford 36, Salisbury moved ahead 9-0 on a scrambling Vance Honeycutt’s 21-yard touchdown pass to a wide-open Patrick Taylor in the corner of the end zone with 7:55 left in the third quarter. The PAT kick failed.

Ledford quarterback Walker Lackey scored to cap a 74-yard drive with 2:04 left in the third quarter to cut the Hornets’ lead to 16-6, but Salisbury stopped a two-point conversion try and still held a two-score lead.

“We just had too many things go wrong, too many mistakes to beat a quality football team,” Adams said.

Then the Hornets broke it open in the fourth quarter with a 42-yard dash to the end zone by freshman JyMikaah Wells and a 31-yard scoring run by McLean.

“We executed really well in the second half,” Hinson said. “We got some big runs to the outside, and our defense continued to play exceptionally well. Ledford’s biggest threat is their quarterback’s ability to run the ball. He’s got speed, but our guys contained him.”

Lackey had 83 rushing yards for the Panthers, but only 20 passing yards.

McLean rushed for 177 yards on 14 carries to surpass 900 yards for the season. The TDs were his seventh and eighth.

Honeycutt threw for 91 yards and ran for 51 yards, while Wells rushed for 75 yards. Marcus Cook had a couple of key pass receptions.

“We put it together,” Hinson said.

Ledford is at Oak Grove next week. Salisbury plays at home against East Davidson.

• The Lexington Dispatch’s Mike Duprez contributed to this story.