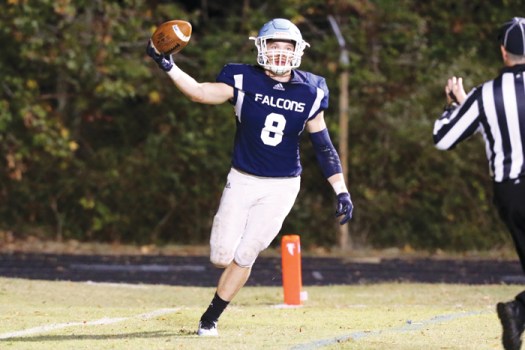 West Rowan’s Baiden Suddarth (8) picks up his second rushing touchdown of the night against South Iredell. James Sipes for the Salisbury Post 10/18/2019 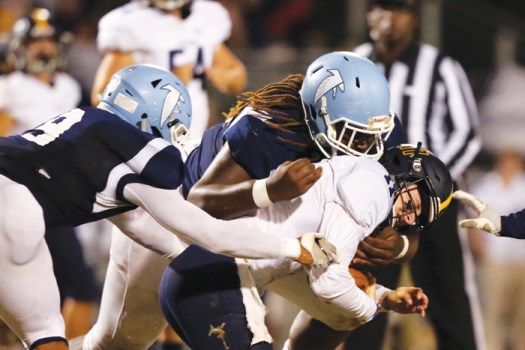 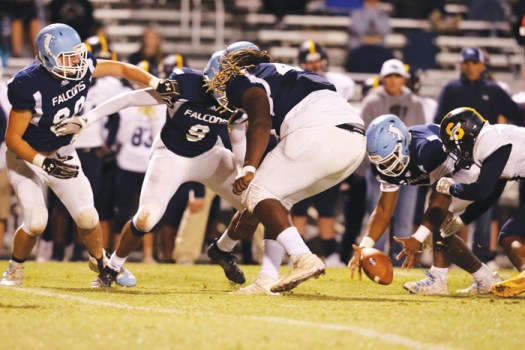 A little bit of everything, tipped ball, interception and fumble by West Rowan’s Zeek Biggers, fumble recovery and touchdown by West Rowan’s Lavontae Jacobs (92). James Sipes for the Salisbury Post 10/18/2019 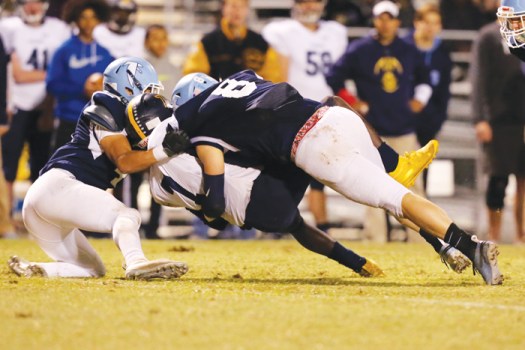 West Rowan’s Baiden Suddarth (8) delivers a crushing blow on a kickoff return on South Iredell’s Tavion Conner (7) and knocks him back into an assist from K.J. Hernandez (4). James Sipes for the Salisbury Post 10/18/2019 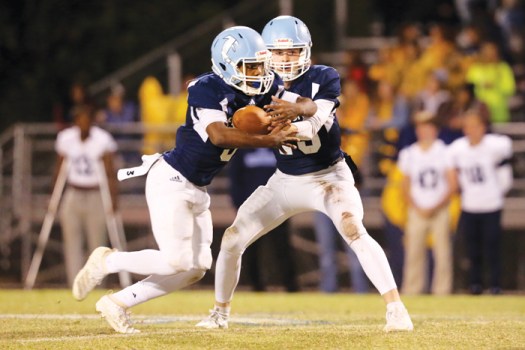 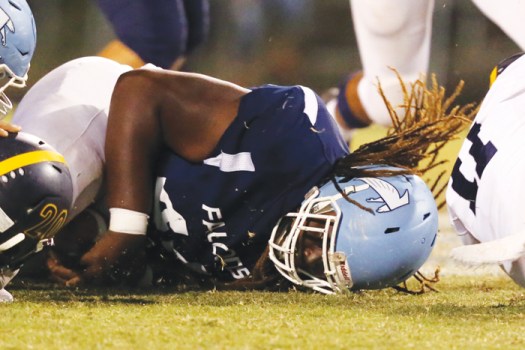 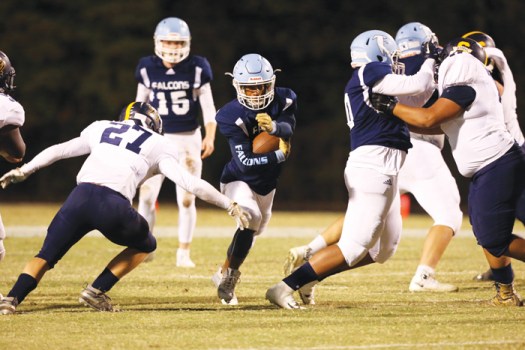 MOUNT ULLA — West Rowan expected to win, make no mistake about that, but no one in the Falcon camp expected to obliterate South Iredell, 41-6.

West, losers in an overtime shootout to South Iredell last season, would have been happy to win Friday’s North Piedmont Conference game by  a single point.

“I didn’t expect this, I don’t think anyone did,” said West right guard Jonny Hassard, who will be representing Rowan County in the Shrine Bowl. “But we had the steam.”

“We made a lot of good plays and we got some good breaks,” West head coach Joe Nixon said. “Most of the season the breaks have gone against us, but we’ve kept plugging.”

South Iredell (2-6, 0-2) got off to a solid start, forcing a three-and-out on the Falcons’ initial possession and then scoring on their second possession with a couple of sharp pass plays that covered 69 yards in a hurry. The PAT failed, but the visitors held a 6-0 lead and dug in their heels against West’s run-run-run offense. The Vikings knew what was coming.

South Iredell nearly had West’s second possession stopped. West stud Jalen Houston was buried for a loss of 8 yards by SI’s 320-pound Cedric Carr to put West behind the chains, but on fourth-and-11 from the SI 33, West QB Noah Loeblein and veteran receiver Quay Weeks teamed up for a touchdown that proved to be a pivotal play.

West’s formation was trips left, with Weeks a solo receiver with man-to-man coverage on the right. Loeblein glanced to his left first, but he was thinking Weeks all the way.

“I turned my man inside and beat him back outside,” said Weeks who made a sweet catch. “My quarterback gave me the ball.”

Next came a fumble recovery near midfield by West’s massive junior defensive lineman Zeek Biggers, who would later add an interception and a monstrous sack.

“We watched film, we studied South Iredell, we were prepared, and we did what we had to do,” said Biggers, who already has an offer from Liberty.

West pounded for a manly touchdown after the Biggers takeaway, with Houston (24 carries, 180 yards) performing most of the labor with crazy quickness and surprising power.  Linebacker/fullback Baiden Suddarth, West’s short-yardage man, crashed across the goal line for a 14-6 lead.

Barely a minute after Suddarth’s TD, came the backbreaker for the Vikings. They had a screen set up, but Biggers (6-5, 300) is a shocking athlete for someone his size. He made an agile  interception. Then he lost his grip on the ball as he eagerly tried to return it, but well-escorted senior teammate Levontae Jacobs cheerfully took it the rest of the way for a 20-6 West lead.

“We’ve worked a lot on playing the screen, on feeling it, and we did a good job on that one,” Nixon said. “Zeek made a heck of a catch to get that play started.”

Then another West stop was followed by another punishing West drive, with Cayleb Brawley (22 carries, 126 yards) ripping off steady gains behind an ornery offensive line. Suddarth got his second TD, barging into the end zone off the right side, and the Falcons owned a secure 27-6 lead prior to halftime homecoming festivities.

“There was nothing glamorous about what we were doing, nothing fancy,” Nixon said. “But we were moving the ball. We were staying on schedule. When you’re getting 5,6,7 yards on first down every time, play-calling gets easy.”

South Iredell made only four first downs in the second half and had frequent negative plays, so there was no chance of the Vikings getting back in the game.

“Defensively, we played the way we can,” said Suddarth, who picked off a pass and made several crunching hits. “Everybody was having fun.”

Houston got his first touchdown of the night when he scored from the 10 to complete West’s 65-yard march that began the second half. That made it 34-6.

“We were just muscling them,” said West’s 285-pound left tackle Edwin Fuentes Berrios. “And our backs were doing an incredible job. We’ve got guys who are shifty enough to make you miss, but they’ll also run right over you.”

Brawley deserved West’s last touchdown — and got it when he roared in from the 11-yard line in the opening seconds of the fourth quarter.

That’s who the Falcons are right now. They’re tough. They’re physical.  They’re going to run the ball. They’ve won their last three and they look like Statesville’s chief competition for the NPC championship.

West ran the ball 59 times for 341 yards, while throwing it three times. The Falcons were as firm on defense as they were on offense. They held South Iredell to a net of 11 rushing yards.

“You’re not going to out-coach South Iredell (Scott Miller has been around a while) and they’ve got a lot of good players,” Nixon said. “We didn’t try to trick them. We just ran it right at ’em and our guys made blocks and our backs found the creases. We took care of the ball. We executed. We did a lot right.”

NOTES: Teenage football will never be easy to figure out. One of South Iredell’s two wins came against Davie. Davie knocked off unbeaten West Forsyth, regarded as one of the state’s top teams, last night. … Erich Epps, who recently had the West Rowan Middle field named for him, was honored. “Those state championship West Rowan won can be traced back to the coaching they got in middle school from Coach Epps,” PA man Mike Gurley told the crowd. … Soccer standout Mackenna Clifton was named homecoming queen.