East Rowan runs to victory in shootout with Carson, 53-30 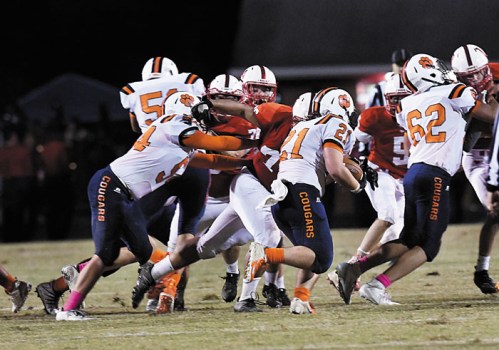 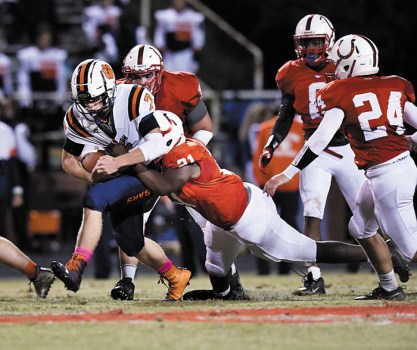 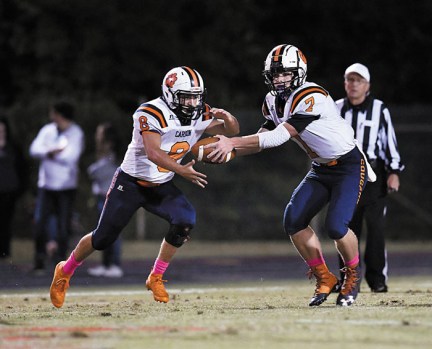 Carson's Alex London 7 hands off to Hunter Courtney 8. photo by Wayne Hinshaw, for the Salisbury Post 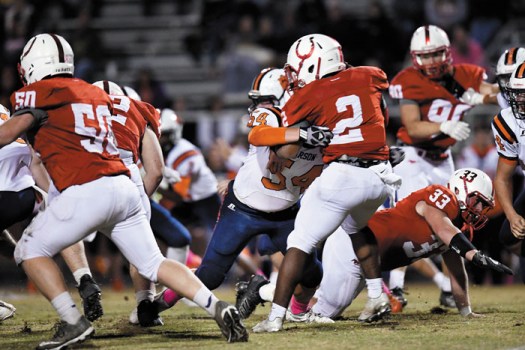 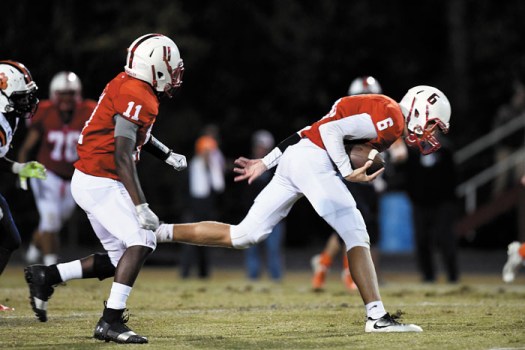 East's Cooper Wright 6 made a catch and ran for a TD . photo by Wayne Hinshaw, for the Salisbury Post 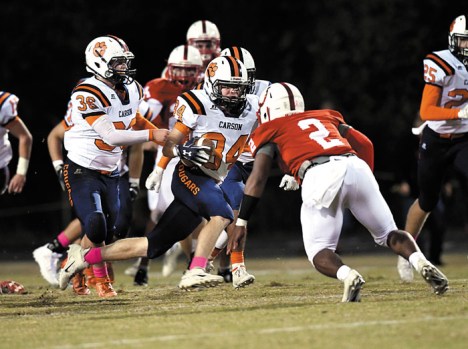 Carson' Zeb Burns 84 returns a kick off with East's Sammy Pinckney 2. photo by Wayne Hinshaw, for the Salisbury Post 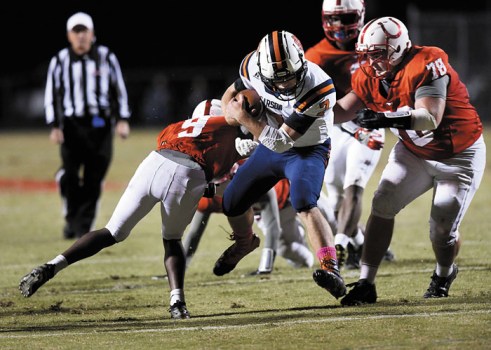 Carson's Alex London 7 being tackled by Zae Neal 9 and Dylan Goodnight 78. photo by Wayne Hinshaw, for the Salisbury Post 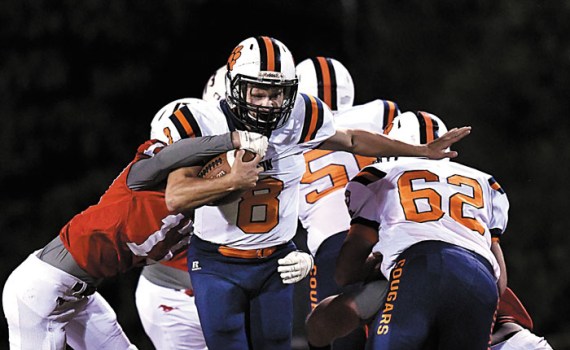 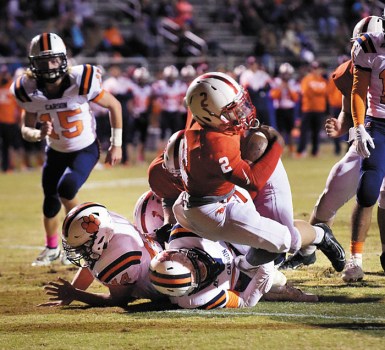 East's Sammy Pinckney 2 twist into the endzone for a TD. photo by Wayne Hinshaw, for the Salisbury Post 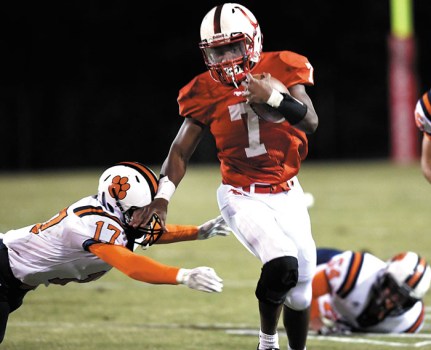 GRANITE QUARRY — There may have been some cause for concern Friday night when East Rowan quarterback Logan Forbis came out before the opening kickoff with his right arm in a sling.

But the Mustangs adapted quickly, with an explosive wildcat attack that posted 535 rushing yards and eight touchdowns, resulting in a 53-30 victory over visiting county rival Carson.

Receiver Vincent Jones and running back Sammy Pinckney took turns taking direct snaps for most of the game, posting some eye-popping and record breaking offensive numbers for the Mustangs. Jones posted a career-best 275 yards on just 13 carries (21.2 yards per carry), while Pinckney was close behind with 272 yards rushing and five touchdowns.

Pinckney capped off likely the best offensive performance in school history with a 73-yard scoring pass to receiver Cooper Wright.

The two offensive juggernauts had almost identical responses to the record breaking night. Neither had any idea they had put up those kind of rushing numbers and both quickly credited the Mustangs’ offensive line.

Pinckney echoed the sentiment, saying “it was the blocking, no doubt. The blocking was amazing tonight.”

So what about that surprise 73-yard scoring strike he threw to senior receiver Wright in the second quarter? Wright was back from a collar bone injury that sidelined him for five games and made his presence known quickly when he broke a slant over the middle and caught the ball in full stride.

“Cooper just ran a great route,” Pinckney said. “I just was able to get it to him in the right spot.”

Just a week ago at Mustang stadium, West Rowan beat East, 31-6, and in the process, produced 234 yards from Jalen Houston and 206 yards from Cayleb Brawley, marking the first time in county prep football history that two runners on the same team had posted over 200 yards rushing in the same game. That distinction lasted just one week as Jones and Pinckney matched and exceeded the unique feat.

The Mustangs (4-4, 1-1 North Piedmont Conference) took control early with a pair of quick scores, but Carson (2-6, 1-1) stayed within striking distance until the fourth quarter, thanks to some precision passing from junior quarterback Alex London (183 yards and two TD passes).

“Alex had a really good game and threw the ball well,” said Cougars’ head coach Daniel Crosby. “Our offensive line gave him time to throw and our passing game kept us in it for a while. But No. 2 (Pinckney) and No. 7 (Jones) were the difference. We threw everything we could at them on defense, but it didn’t make a difference. So hats off to them.”

East gouged the Cougars right out the gate with a quick-scoring drive to make it 6-0 on Pinckney’s 9-yard run. On its next possession, East scored again to go up 12-0, when Isa’ah Cauthen took a handoff from backup quarterback Caleb Jarvis to score from the two. On that drive, Jones broke an 81-yard scoring run, only to have it negated by offsetting penalties.

Carson responded with a 66-yard drive behind Hunter Courtney and London. Fullback Evan Johnston capped the drive with a 9-yard drive to make it 12-7 in the final minute of the first quarter.

After an exchange of punts, East struck again on Pinckney’s surprise pass to Wright for the long score, making it 18-7. It was only one of two passes the Mustangs attempted in the game.

Carson responded quickly, thanks to a 41-yard strike from London to Zeb Burns, down to the East 2-yard line. Johnston punched it in from there as Carson pulled to within 18-14. But the Mustangs were equal to the task, thanks to a big kickoff return to midfield by Isaac Hinceman. Four straight Pinckney runs produced the touchdown to expand the East lead to 25-14, which held up until halftime.

Carson opened the third period with a 39-yard field goal by Andrew Beaver to get within a touchdown, but East answered quickly with alternating runs by Pinckney and Jones, moving 62 yards in just five plays. Jones closed the drive with a 31-yard sprint for the score that put him over 200 yards for the night.

The back and forth nature of the game continued as Carson moved to the East 34, facing fourth and 3. London came through with a 34-yard perfect strike to Burns in the end zone, making it 32-24.

However, East needed just three plays to answer, thanks to a 33-yard breakaway by Jones to the 12. Pinckney scored on the next play to expand the Mustangs’ lead to 39-24.

Carson had a little magic left as the third quarter wound down when London lofted a pass into the end zone, where Jake Harris made a leaping catch over two defenders for the score.

The tide turned for good for East in the fourth period when Pinckney opened the quarter with a 73-yard, zigzag run, putting him over 200 yards for the game and giving his team a 46-30 margin.

The Mustangs’ defense then rose to the occasion by pitching a shutout for the rest of the way. Meanwhile the offense put up a final score after a time-consuming drive. Pinckney notched his fifth TD of the game with a one-yard dive to make it 53-30 with just 5:20 left.

Carson threatened in the waning minute as they drove to the East Rowan 8, but Mustang defender Braeden Moore intercepted London’s pass in the end zone to slam the door.

The East Rowan offensive line was proud of the effort that produced all of the yards and touchdowns in the important conference win.

“We were just focused on what we had practiced all week,” said 255-pound offensive lineman Josh Samoa, “We executed well and I think we just knew what to do all night.”

The Mustangs hit the road next Friday for a key NPC contest at South Iredell, that could have playoff implications. Carson returns home next Friday with a game against the undefeated, league-leading Statesville Greyhounds (8-0).