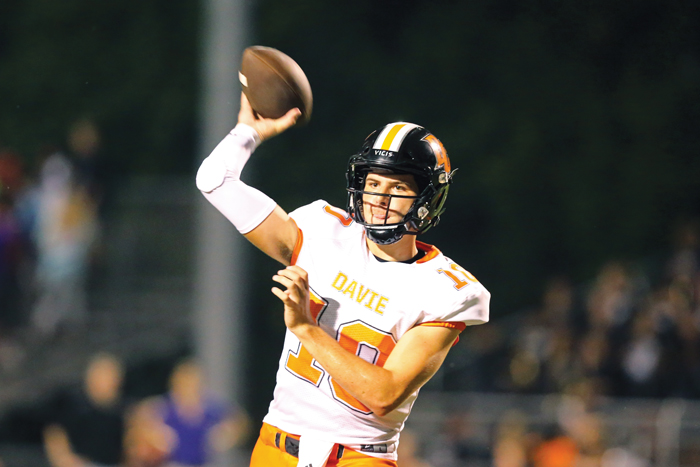 Davie County QB Nate Hampton, shown during an earlier game this season against West Rowan. On Friday night, Hampton led a 37-34 upset win over West Forsyth by completing a school-record 30 passes for 300 yards and three TDs. File photo by James Sipes/ for the Salisbury Post

CLEMMONS — A three-loss Davie County football team that was a 29-point underdog — according to the Massey Ratings — couldn’t win on a juggernaut’s home field, but it did.
A Davie team that fell behind unbeaten West Forsyth 68 seconds into the game and trailed, 14-3, less than four minutes in, couldn’t rally for an upset to shock the state, but it did.
With quarterback Nate Hampton and receiver Jack Reynolds delivering magician-like stuff — and a ton of their teammates providing crucial support — the War Eagles pulled out a fever dream of a game, 37-34, here Friday night.

The Titans, who a week ago celebrated a 41-38 win over East Forsyth in a colossal showdown of unbeatens, slipped to 7-1 overall and 1-1 in the Central Piedmont Conference. Davie, which had lost six of seven in this series, improved to 5-3, 2-0.
And there was nothing fluky about the War Eagles’ win.

One West score was on a kickoff return. West stopped a fourth-and-goal from the 1-yard line or it would have trailed by more than two at halftime. The War Eagles racked up 30 first downs, 518 total yards, went 9-of-15 on third-down conversions, moved the chains on 3-of-4 fourth-down tries and did not punt until 2:52 remaining, when leading by 10 points.
The Titans countered with 26 first downs, 470 yards and went 11-of-15 on third-down conversions.
“The kids had the belief,” coach Tim Devericks said. “Even though the results (during a 3-3 non-conference run) weren’t what we wanted them to be, they knew good things could happen and they kept believing in each other.”

Hampton had thrown for 411, 388 and 340 yards earlier this season, but what he did in this one was more amazing. He went 30-of-38 for 300 yards, with three TD passes, setting a school record for completions. As if that wasn’t enough, he rushed for 72 yards.
Reynolds had a superhero game: 15 catches for 176 yards and two scores. He broke the record for single-game receptions.
Gage Recktenwald, Justice Redmon and the Davie defense withstood G’mone Wilson’s 145 rushing yards and Zy Dillard’s 84.
The Titans had visions of a romp in the early going. They took the opening kickoff and motored 71 yards in five plays, with Wilson barely getting touched on a 9-yard TD run. After Davie’s Willy Moure drilled a 27-yard field goal, Nasion Johnson returned the ensuing kickoff 78 yards to give West a 14-3 lead on its homecoming.
“I told them the game is not won in the first quarter,” Devericks said. “It’s a four-quarter game. Weather the storm and win the next play.”
But few could have imagined the magic of Davie’s offense. It scored on three of four first-half possessions, the exception a 67-yard drive that was stopped at the West 1-yard line.
Sophomore Tate Carney, who rushed for 99 yards and caught passes for another 58, took a direct snap and scored with ease from 4 yards out, capping a 14-play, 70-yard drive, cutting the deficit to 14-9.
Reynolds made a fabulous 29-yard catch at the West 7 on fourth-and-8, going high between two defenders and holding on as he was popped. That was the drive that ended at the West 1. On fourth down, the Titans stoned Carney to keep it 14-9.
Redmon picked up Davie’s spirits with a magnificent interception, reaching out to tip a pass and gathering the deflection at the Davie 10. Nine plays later, Hampton and Reynolds connected for a 17-yard TD as Davie grabbed a 16-14 halftime lead.
After Caleb Bowling’s third-down sack led to a West punt, Davie faced third-and-26. Hampton threw over the middle. Reynolds came down with it for 26 yards at the West 35. Carney rumbled for 15 and 12 yards on back-to-back plays and Hampton covered the last 8 on a keeper. The 11-play, 80-yard march bumped Davie’s lead to 23-14.
Wilson answered, running for 57 of his team’s 72 yards on a 10-play scoring drive for West. The point-after kick failed, but West was right back in it at 23-20.
Then it was Davie’s turn. A third-and-2 pass to Reynolds went for 12 yards. A third-and-7 pass to Reynolds went for 12 yards and six points as Davie moved in front 30-20.
West was undaunted, driving 66 yards in 12 plays. Wilson gained the final 18 yards as the Titans pulled within 30-27 with 10 seconds left in the third quarter.
Davie’s response was like watching a work of art. On fourth-and-4 from the West 34, Evan Little made a 10-yard catch from his knees. On fourth-and-1 from the 15, Hampton bought time and hit diving Carney for a 15-yard TD that made it 37-27 with 7:09 remaining.
The Titans failed on fourth-and-7 from the Davie 23 — a halfback pass fell incomplete — but they wouldn’t go quietly. Davie punted after four plays. Pass interference on third down kept the Titans alive, and they scored on QB Jalen Ferguson’s 9-yard scramble. Now, it was 37-34.
Even though only 5.6 seconds remained, it wasn’t quite done and dusted for Davie. West recovered the onside kick at midfield with two seconds left. An incompletion on a short pass finally ended a win that will live forever in the Davie archives.
“I was asked what goes into the progression from last year to this year,” Devericks said. “No. 1, buying into a team mentality. No. 2, we spread the ball around so much with the run and the pass that they can’t really focus on one area.”
NOTES: Josh Robinson, who had missed four games with a knee injury and subsequent surgery, was a difference-maker in his first action since Sept. 6, rushing for 42 yards and averaging eight yards on three receptions. … A Davie offensive line that has defied a lot of expectations did not permit a sack and enabled Davie runners to average 5.3 yards per carry. That unit consists of Tanner Batten, Camden Beck, Jared Simpson, Stuie Marshall and Spencer Williams. … The old record for receptions was 12 by Ben Ellis in a 40-33 win over Mt. Tabor in 2015. … The old standard for completions was 27, shared by Chris Reynolds, who did it twice, and Josh Hall. … Redmon’s INT was the only turnover of the game.