College football: Newberry back breaks records in win over Catawba 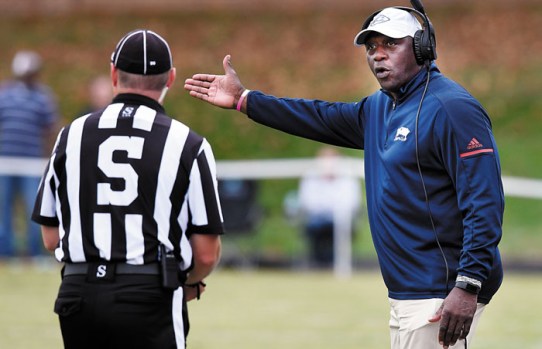 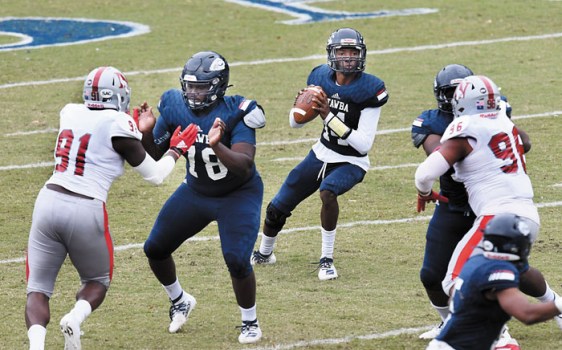 Catawba's Kendall Davis 14 passing from the pocket.. .. photo by Wayne Hinshaw, for the Salisbury Post 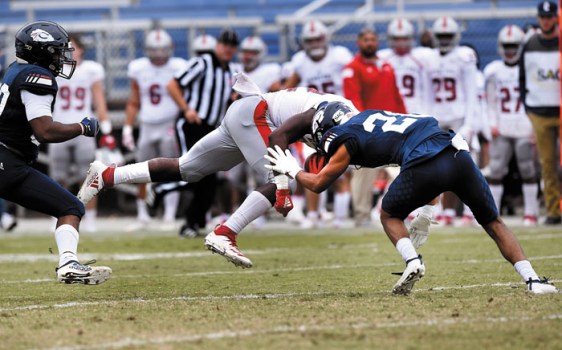 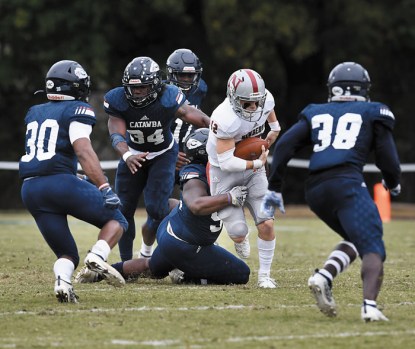 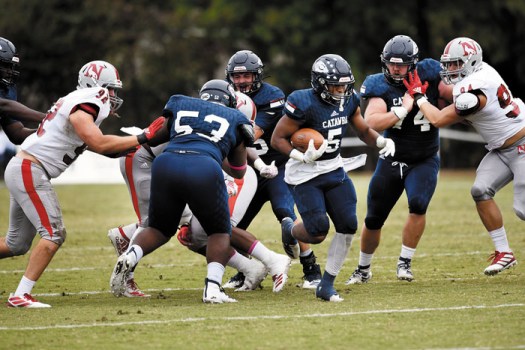 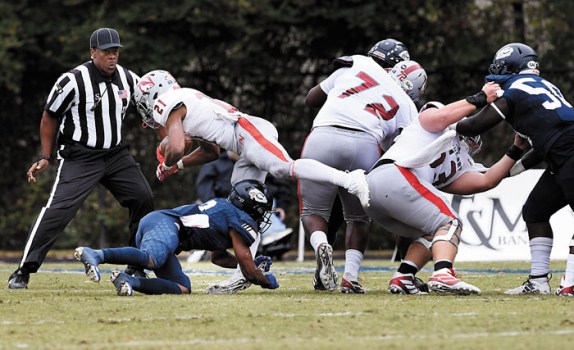 Newberry's Chance Walker scoring one of his 6 TD's..photo by Wayne Hinshaw, for the Salisbury Post 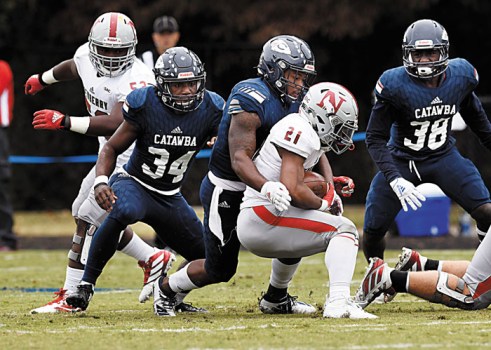 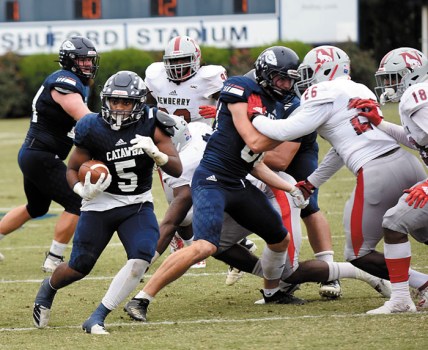 Catawba blocked an extra point kick on this play. Elihah Banks 15 got his hand on the ball. photo by Wayne Hinshaw, for the Salisbury Post 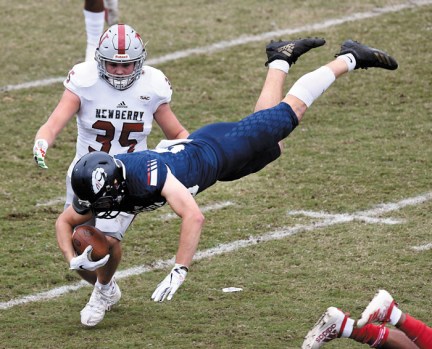 SALISBURY — Records were set at Shuford Stadium on Saturday afternoon.

Unfortunately, one of Catawba’s opponents was doing the setting. The Indians are bringing out the best in their opponents.

Newberry back Chance Walker came to Salisbury with zero career touchdowns and modest season stats of 25 carries for 93 yards. The junior left town as a 5-foot-11, 180-pound legend. He piled up 26 carries for 261 rushing yards and six touchdowns, in a 44-21 South Atlantic Conference romp over the Indians.

Newberry has competed in football for 106 years and has played 1,044 games. The previous school records were four touchdowns and 255 rushing yards. Walker might be in line for some national awards this week.

“Our game plan was to run the ball, but I had no idea I’d do anything like I did,” Walker said. “Our coaches put me in position, our offensive line and receivers did a great job blocking, and I was able to make some guys miss.”

Catawba’s guys missed Walker with alarming frequency. He’s fast and had made his biggest contributions prior to Saturday on kickoff returns.

“We’ve felt like Walker had the ability to crack big runs if we could ever get him to the second level of the defense,” Newberry head coach Todd Knight said. “Today, we finally got him to that second level. We came here expecting this game to be decided by a field goal, but Walker got going and we just stayed with him. When it’s working, you keep doing it.”

Catawba (1-6, 0-4) lost for the fifth straight time. Catawba has allowed 155 points the last three weeks, which makes it difficult to win.

As a team, Newberry rushed for 432 yards, its second-highest total in this century.

“We need to get better, a lot better, and we’ve got a lot of things to correct,” Catawba head coach Curtis Walker said. “We need to create more breaks and we need to make more plays, offensively and defensively, and on special teams. Once again, our opponent made a lot more plays than we did.”

While he didn’t figure into any scoring plays, except for making handoffs to Walker, Newberry quarterback Colton Bailey, a 5-9 redshirt freshman, had a terrific day. He was 9-for-12 for 157 passing yards and rushed for 109 yards.

“He’s small in stature and may not look like much on the hoof, but hearts can’t be measured and he has one of the biggest,” Knight said. “We had such good interior running from Walker that it opened up Bailey getting to the outside and making throws. When you can run the ball, you can do a lot of things.”

On Newberry’s first possession, which began at the Catawba 39 after a strong return of a low Catawba punt, Bailey quickly faced third-and 11. He converted, with a precise throw to Deshun Kitchings. It was early, but that was probably the turning point of the game. Newberry went on to score. Walker got his first touchdown.

Catawba quickly faced a third-and-16 on its second possession.  Davis was sacked by Tyrone Kelly and banged up. Catawba had to punt.

Catawba’s defense had Newberry behind the sticks, facing third-and-13 at the Newberry 34, but Bailey converted again, with Kitchings helping him out with a major adjustment and an outstanding catch for 55 yards to the Catawba 11. Walker put it in the end zone from there with two determined runs, and the Indians were in a 14-0 hole from which they never escaped.

“It’s always a couple of plays,” Knight said. “Catawba had us in third-and-long on both of our first two drives. But Bailey and Kitchings made plays, and it’s 14-0 instead of 0-0.”

Catawba back Demonte Good (96 rushing yards) and the offensive line did just about all the work on a 75-yard drive late in the first quarter that got Catawba within 14-7 and offered some hope.

But Newberry answered with another forceful drive and another Walker touchdown for a 20-7 lead.

Trying to scrap back into it, Catawba experienced a disastrous sequence. Davis hit Will Sweeper for 32 yards to the Newberry 36, but center Kevin Norton went down on the next play. Then Davis was intercepted on a laser that was deflected and redirected to Newberry DB Anthony Blue. Two plays later, Walker busted a 68-yarder for a 27-7 lead.

After a 42-yard completion to Sweeper, the speedster who finally returned to the Catawba lineup on Saturday, Davis threw a 6-yard touchdown pass to tall wideout Kolby Easley to trim  Catawba’s deficit at halftime to 27-14.

“In spurts, we played well,” Easley said. “But we’ve got to pick it up earlier. We had a slow start.”

When Catawba halted the Wolves to start the second half, the opportunity was there to rally, but the Indians suffered more misfortune. Scrambling for a first down, Davis was hit late out of bounds and knocked out of the game. Flags flew, and Catawba had a first down at the Newberry 44. True freshman Kaylon Wade, the No. 3 QB when the season began, is no longer a redshirt. He entered the game and lost a fumble on his first snap. Newberry pounced on it.

“I’m sure he was mighty nervous on his first play,” Coach Walker said. “He did well after that. He gives us another quarterback that we can win with.”

After that lost fumble, Bailey and Walker moved it down the field, with Bailey’s 19-yard scamper on third-and-17 providing the key play. Walker scored from the 12, dragging tacklers, and it was 34-14 with 5:28 left in the third quarter, and just about over.

“Newberry’s offensive line, those guys were sound,” Catawba’s veteran linebacker L.J. Melvin said. “They blocked well and they used a lot of motion to get us out of position. They put everything together today.”

Walker would get his final TD for a 41-14 lead with 1:49 left in the third quarter. He left the game for a while, but he returned to the field, not to pour it on, but to add the handful of rushing yards he needed to reach the school mark. Newberry’s SID departed the press box and passed a note to the offensive coordinator to let him know what the numbers were.

Catawba’s final TD came with 9:06 left in the game when Chylon Thomas snagged the first TD pass of Wade’s college career. That score was set up when Adam Rowson caused a fumble, and lineman Cameron Davis rumbled 43 yards on the return.

Catawba will try to rebound next Saturday’s It’s the homecoming game against Mars Hill. Newberry (3-4, 3-2) has won three of its last four. The loss in that span was 20-19 to Mars Hill.

NOTES: Knight is one of Walker’s closest friends in the coaching ranks. Knight joked about making a recruiting pitch prior to the game to Walker’s son, Jalon, a sophomore linebacker at Salisbury High, who already has ACC offers. … Knight likes Catawba’s chances of breaking its five-game skid next week against Mars Hill. “Curtis is a heck of a coach, and they’ve got a lot of good players,” he said. “I hugged Curtis’ neck after the game and told him I hope they win on homecoming.” … In addition to Sweeper, Catawba welcomed DB Caleb Allen back from injury. … Cris Page intercepted a pass for the Indians late in the first half, but his electric return into Newberry territory was wiped out by a penalty.