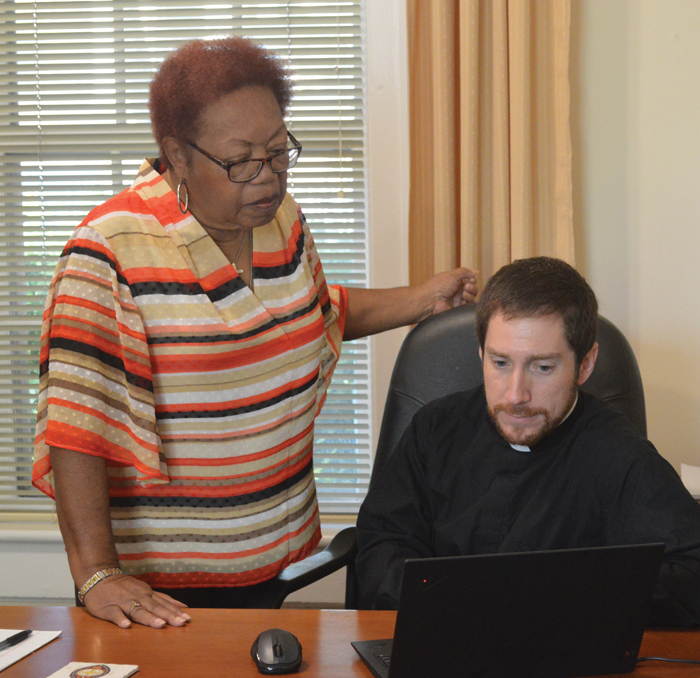 Mary Jones and Robert Black view footage of the new documentary film that St. Luke’s will screen for the public on October 20.

SALISBURY — St. Luke’s Episcopal Church will screen the documentary “Becoming Beloved Community” at 4 p.m. Sunday at the church. In the 18-minute film, five African American residents of Salisbury, including three St. Luke’s members, share their memories and experiences of racism and segregation.

The screening, which is open to the public, will be the church’s Parish Hall, 131 W. Council St.

“I am honored to be involved with the project,” said Mary Jones, a St. Luke’s parishioner. “This process of dealing with racial reconciliation has unearthed many memories, both sweet and bittersweet. I didn’t realize how much anger I was still harboring. I also didn’t realize how much of my life had been and still is affected by my family’s experiences.”

Other Salisbury residents featured are the Rev. Derrick Anderson, Darrell Hancock and Dora Wood. In addition to local voices, the film includes interviews with Presiding Bishop Michael Curry and Samuel Rodman, the bishop of North Carolina.

After the screening, a panel discussion will feature several people interviewed for the project.

The film is St. Luke’s next installment in a series of community programs aimed at inviting discussion about racial reconciliation in Salisbury. Episcopal churches across the country are joining the Becoming the Beloved Community movement, initiated by Curry.

Curry, who delivered the sermon at the wedding of Britain’s Prince Harry and Meghan Markle, previously was the bishop of North Carolina and regularly visited St. Luke’s for years.

Founded in 1753, St. Luke’s story has been documented throughout its 266-year history. Last year, the church noted a chapter was missing from its history: The story of how Africans and African Americans contributed to the development of St. Luke’s had not been fully told. The painful role that slavery and racial segregation played in the history of the church had not been adequately documented.

The Rev. Robert Black and committee members Barbara Perry, Diane Hundley and the Rev. Bonnie Duckworth worked to correct that.

St. Luke’s won a Mission Endowment Grant from the Episcopal Diocese of North Carolina. Part of that grant funded the production of the documentary.

“These first-person stories are really important, and we wanted to capture these experiences before they were lost to memory,” Black said. “I grew up in the ’80s and ’90s, long after the passage of the Civil Rights Act and legal segregation. I have never seen a ‘colored’ water fountain, other than in photos.”

Because today’s struggle for racial reconciliation is rooted in the past, Black said, St. Luke’s thought it was important to capture these stories so people could hear — directly from those who experienced racism and segregation — what these wounds are.

“Without a shared knowledge of the past, we cannot move closer to a reconciled future,” he said. “The wounds of racism are still painful in our community, and the path toward healing comes not through ignoring the past but rather by telling the truth with an expectation that God’s reconciling love can heal all wounds.”

St. Luke’s will host a weekend of racial reconciliation programs Nov. 8-10 featuring guest speakers Catherine Meeks and Bishop Will Willimon. The public is invited. More information is at www.sls.church/beloved-community.html.