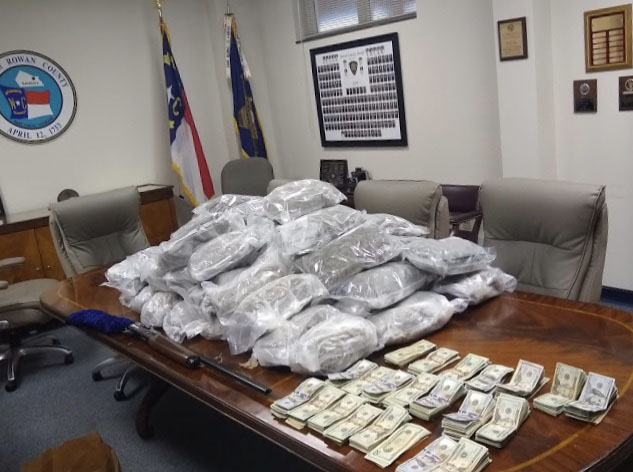 Rowan Sheriff's investigators seized 102 pounds of marijuana, valued over $200,000 as well as cash and a shotgun from a commercial car hauler, a Roseman Road residence and an outbuilding. Photo by Rowan County Sheriff's Office

Rowan County Sheriff’s officials say two local men were charged with marijuana trafficking after the drug was found in a commercial car hauler, a residence and an outbuilding, valued at over $200,000.

The Special Investigations Unit received information about possible suspicious activity on Monday regarding a California-plated commercial car hauler at a truck stop on Peeler Road in Salisbury.

Investigators saw the hauler move to another location off Peeler Road where two individuals began offloading boxes from a vehicle on the hauler. The boxes were placed into a gold Nissan Versa and taken to 475 Roseman Road in Salisbury. The boxes were then moved from the Nissan into an outbuilding and the two occupants of the Nissan left.

A search was conducted of the car hauler and its vehicles and deputies found an additional 33 pounds of marijuana and $29,295 cash inside. Authorities said at this time no charges have been brought against the driver.

Both were placed in the Rowan County Detention Center under $150,000 secured bonds and have since been released from custody.