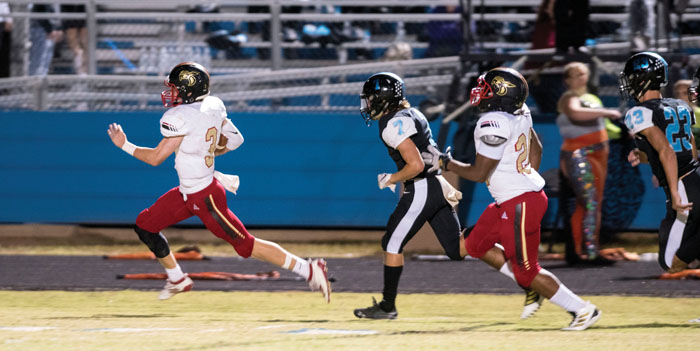 JON C. LAKEY/SALISBURY POST ... Salisbury’s Vance Honeycutt (3), left, runs to the end zone for a touchdown, during last Friday’s game at Oak Grove. The Hornets fell for the first time this season and travels to Ledford tonight.

It was 2003, a mid-June day like any other, when the Salisbury Post’s Dave Shaw was assigned to cover a South Rowan American Legion baseball road game.

Baseball is Dave’s favorite sport. A former hurler himself, he relishes those 1-0 or 2-1 games that turn on a single pitch or a single swing or a single call or a single miscue. South was scoring lots of runs, but Davie figured he could live with a 7-5, three-hour struggle.

The late Ronnie Gallagher was the Post sports editor then. He handed Dave the assignment. It was a Tuesday.

I’d spent that Monday traveling to Johnson City, Tenn., covering local phenom Cal Hayes Jr.’s pro debut with the Johnson City Cardinals. Cal had thumped a monstrous homer into a swimming pool, the stuff of legends, so it had been a worthwhile trip to the Tennessee mountains. On Tuesday night, I was in the office writing the Hayes story. It was a long one, but I finished. Then I started wondering where Dave was.

Midnight came. Midnight went. Still no Dave. He was in Mocksville, at Rich Park, where it was now Wednesday morning and where all heck had broken loose. The opportunity for all heck to break loose was present because they played nine innings in those days.

South scored seven runs in the fifth for a 12-4 lead, but Mocksville’s 14-run bottom of the eighth lasted an hour or so and complicated things. Down 22-16 going to the ninth, South didn’t blink and scored seven more times to lead 23-22. Naturally, Mocksville plated a solitary run in the bottom of the ninth to force extra innings.

Three grand slams were launched. The game lasted more than five hours. The bewildered coaches — South’s Allen Wilson and Mocksville’s Mike Lovelace — agreed it was the most astounding thing they’d ever witnessed.

“Even if we’d scored a touchdown in the bottom of the ninth, we would have had to go for two,” quipped Lovelace.

Shaw would report it was more head-turning than “The Exorcist.”

Dave eventually staggered back down U.S. Route 601 to Salisbury, shaken but not perturbed. “South won 31-23 in 10,” he reported with an icy calmness. Then, without further ado, he went to work on his story. There were no firm deadlines then, because the Post presses were busy printing USA Today well into the morning hours. Sometimes I worked on high school boxscores all night. Dave’s astonishing story appeared in the driveways of subscribers on schedule.

It was on that Twilight Zone Tuesday in 2003 we came to realize that amazing occurrences follow Dave around.

His Midas touch carried over to triple-overtime basketball games, school-record scoring outbursts and comebacks from 25 points down. When Dr. Dave, as we know him (he’s retired now from the VA hospital), entered a gym, a 2-15 team suddenly had a fighting chance against a 15-2 team.

And when it comes to football,  don’t get me started.

North Rowan-South Stanly two weeks ago looked like a potential snoozer, but Dr. Dave was there, so Malcolm Wilson tied the county record with six touchdowns.

Last Friday, Dave watched West Rowan’s Jalen Houston and Cayleb Brawley rush for more than 200 yards apiece. Teammates with 200-plus? No Rowan team had ever done that.

Dave is headed to South Rowan-Thomasville tonight. South’s been playing football 59 seasons and owns one win over Thomasville, but I can just about promise something out of the ordinary will happen. Maybe something wonderful will happen.

As for the picks, nothing wonderful happened last Friday. I picked Salisbury over Oak Grove on the road in the battle of unbeatens. I was 5-1, as was Marny Hendrick. Scott Maddox was an Oak Grove-backer and was 6-0. We all got lucky on North Rowan-Albemarle, while A.L. Brown nearly came all the way back after spotting Central Cabarrus 28 points.

As for me (29-9), I’ll take Ledford and I’ll also take A.L. Brown. The panel is unanimous on East, West Rowan, North, Thomasville and West Forsyth.

The Bears from Bear Creek are ranked 401st out of 406 N.C. teams by MaxPreps.

The Massey Ratings, which use a mathematical formula to predict every game nationwide, say North Rowan is favored by 42 points and has a 100 percent win probability.

How many touchdowns will Wilson score? Keep that calculator on your mobile device handy.

South shocked the Bulldogs two years ago, but Thomasville leads the all-time series 14-1.

Officially, Thomasville is favored by 24. South is given only a 9 percent win probability, but that’s still a lot better than Chatham Central’s odds.

First of all, the Vikings are better than 2-5. They’ve played a brutal schedule and already have their game with NPC favorite Statesville out of the way.

South Iredell beat explosive Davie, which is somewhat concerning if you’re a West fan. It means the Vikings are capable.

But the Falcons can really run the ball, and they’re getting better at it every week. They might possess it all night.

West is an 8-point favorite, with a 68 percent win probability, but that means South Iredell has about a one in three chance of pulling an upset that could seriously damage West’s season.

East standout Sammy Pinckney has rushed for over 1,000 yards this season and had 149 yards and two TDs against Carson last year.

Both teams run the ball with some zest and have had trouble stopping the run, so we’ll see who can get some stops.

Carson has had two weeks to prepare, so even though the Cougars are 17-point Massey Ratings underdogs, it should be tighter than that.

On a side note, the South Legion catcher in that 31-23 classic was Daniel Crosby. He’s now Carson’s head football coach.

Obviously, it’s a must-win for Salisbury if the Hornets are going to stick around in the CCC race.

The best-case scenario for SHS now is a three-way tie. If Salisbury can beat Ledford, maybe Ledford can beat Oak Grove next week.

Ledford dropped its two non-conference contests to good teams (4A Glenn and unbeaten Randleman). Since then, the Panthers have basically pounded on a lot of the same CCC teams the Hornets have been beating.

Both teams have defenses that are superior to their offenses, so there’s little doubt it’s going to be low-scoring.

Ledford’s strongest area is its defensive line, but the Hornets have to be able to run it some. If they can’t run, then it’s really hard to throw.

The Massey Ratings don’t predict many shutouts, but their projected score is Ledford 14, Salisbury 0.

Salisbury is given only a 10 percent win probability, but it should be higher. At least, I think it should be.

Salisbury’s last win against Ledford on the field was in 2008, but the Hornets forfeited, so officially you have to go back to 2006 to find a Salisbury win. Ledford leads the series 12-8.

A.L. Brown is about a 7-point underdog and has a 37 percent win probability, but it can ill afford to lose this one, with powerhouse Northwest Cabarrus looming on deck.

The Wonders lead the all-time series 5-1. Cox Mill won for the first time in the series in 2018.

There’s no great time to play a team as good as West Forsyth, but this may be as good as any for the War Eagles.

West Forsyth is coming off a massive win against East Forsyth that was one of the state’s bigger games last week and may not be able to replicate that level of intensity two weeks in a row.

Davie put up 63 points last week, but is still a 29-point underdog with only a 3 percent win probability. That’s how good the Titans are perceived to be.