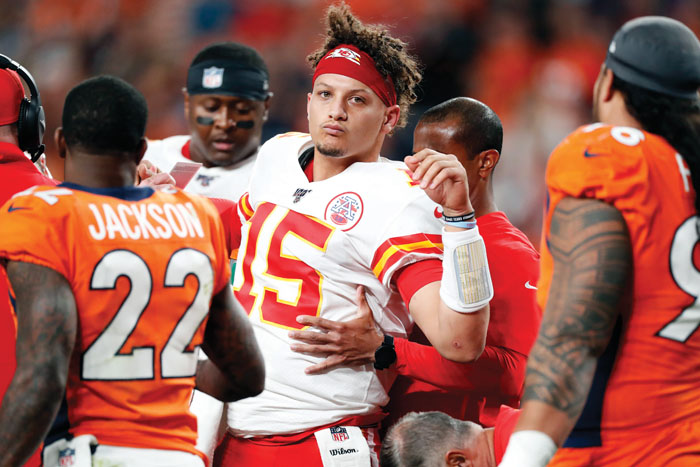 Kansas City Chiefs quarterback Patrick Mahomes (15) is helped off the field after being injured against the Denver Broncos during the first half of an NFL football game, Thursday, Oct. 17, 2019, in Denver. (AP Photo/David Zalubowski)

By DAVE SKRETTA AP Sports Writer
KANSAS CITY, Mo. (AP) — Chiefs quarterback Patrick Mahomes escaped significant ligament damage when he dislocated his right kneecap and there is optimism the reigning NFL MVP could be back on the field in about a month.
Mahomes had an MRI exam Friday that showed the ligaments were intact, a person familiar with the situation told The Associated Press. The person spoke on condition of anonymity because the team was still sorting through the results and putting together a timetable for his return.
The Chiefs play Green Bay a week from Sunday, then face the Vikings and Titans before a Monday night matchup against Tennessee on Nov. 18. The Chiefs (5-2) have their bye the following week, so it is possible they hold Mahomes out until Dec. 1 against Oakland.
“The kid had the MRI and we don’t have all the information. That’s what I can give you,” Chiefs coach Andy Reid said Friday. “Once we get the information, we can give you everything that kind of happened and what’s going on down the road. The whole deal.”
Mahomes was hurt in a 30-6 victory in Denver on Thursday night while sneaking for first down on fourth-and-short deep in Broncos territory. Everyone jumped up from the pile but Mahomes, who quickly reached for his right knee as trainers rushed onto the field.
Physicians used what is called a reduction maneuver to guide the patella back into place, and Mahomes was helped to his feet and shooed away a waiting cart. As players from both teams gathered to pat him on the back, Mahomes limped off the field and to the locker room with little assistance.
Mahomes was only in the X-ray room for a couple minutes before he was ruled out.
The Chiefs led 13-6 when Mahomes left and journeyman quarterback Matt Moore, who was signed just before the season when backup Chad Henne broke his ankle, finished the game. Moore wound up going 10 of 19 for 117 yards, a good chunk of it coming on a 57-yard scoring strike to Tyreek Hill.
“It’s hard to do, really the whole thing he’s done, coming in late to us,” Reid said. “Then it’s hard to be a relief pitcher. He’s done it before. There’s a certain way to prep for that and he understands that. It paid off for him. The best part is we didn’t have to change up a lot of things. The hard thing is if the guy comes in, the backup, and you have to change the whole offense.”
Reid indicated that Moore would be the starter going forward, and that rookie Kyle Shurmur — the son of longtime NFL coach Pat Shurmur — could be elevated from the practice squad as the backup.
“I shorted some throws and missed some stuff, some stuff I think the quarterback should hit,” Moore said, “but I kind of got into a little rhythm there as the game went on and Coach Reid had a nice flow going on with play calls and made me feel comfortable as we went on down.”
Henne is making progress and could be ready to come off injured reserve in Week 8.
Moore and the Chiefs have the benefit of a few extra days by virtue of playing Thursday night, though Reid said he was following through on his plan to give the team a few days off. The team will reconvene after the weekend before a Sunday night showdown against the Packers.
By that point, the Chiefs could have wide receiver Sammy Watkins back from a hamstring injury, and left tackle Eric Fisher (groin) and left guard Andrew Wylie (ankle) could be close to returning.
“Again, I don’t think we’ll have to change the whole offense,” Reid said, “but definitely that is part of being a coach and knowing your players. You want to put them in the best position for what they do best, then work on those things to get them better on the things they don’t do best.
“We’ll look at what (Moore) does best and talk and put together a good game plan.”
WHAT’S WORKING
The Chiefs’ defense has been criticized all season, but it allowed 205 yards to the Broncos. It held them to 1 for 13 on third down, piled up nine sacks and shut them out the final 54:06.
WHAT’S NOT WORKING
Penalties remain a problem for the Chiefs. They may be one of the few teams in the NFL that can say six flags for 46 yards represent a massive improvement.
STOCK UP
DE Frank Clark had two sacks and abused the Broncos offensive line all night, for the first time living up to the $105 million, five-year extension he signed after his trade from Seattle.
STOCK DOWN
RB Damien Williams has been ineffective after dealing with injuries early this season, and he had nine carries for seven yards in Denver. LeSean McCoy ran 12 times for 64 yards.
INJURED
Nobody of significance went down against Denver besides the quarterback.
KEY NUMBER
200. That’s the number of regular-season wins for Reid, who had been stuck on 199 as the Chiefs lost back-to-back games. He has 212 when the playoffs are included.
NEXT STEPS
The Packers-Chiefs game was supposed to be a Sunday night showdown between Mahomes and Green Bay counterpart Aaron Rodgers. Now it’s merely an intriguing matchup of playoff contenders.
___
More AP NFL: https://apnews.com/NFL and https://twitter.com/AP_NFL