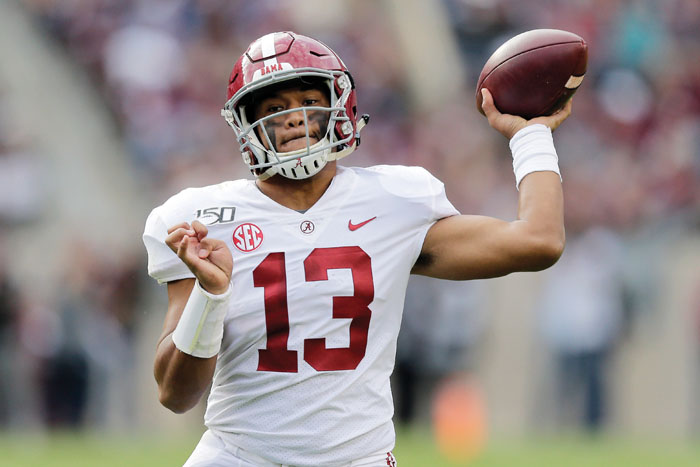 The current players from both teams were mostly in elementary school. The top-ranked Crimson Tide has won the last 12 meetings in this traditional Third Saturday in October rivalry, mostly by large margins.

The Vols are hoping to end that bitter streak and break out the traditional victory cigars once again Saturday night at Bryant-Denny Stadium.

It just so happens that Alabama’s dynastic stretch under Saban has coincided with a rocky span for the Volunteers. They have had five head coaches since Saban’s 2007 arrival in Tuscaloosa not counting interim coaches. One of the five, Butch Jones, is now an analyst for Saban.

Alabama has won the last three meetings by a combined 152-38.

It has been a streaky rivalry at times even before this one. Tennessee won seven straight starting in 1995, including the last three years of quarterback Peyton Manning’s career.

That followed an 8-0-1 stretch controlled by Bama.

There hasn’t been one this long. Tennessee’s last win over the Tide was 13-6 in 2006, Mike Shula’s last year with the Tide.

The rivalry may not have quite the same bragging rights as the Iron Bowl game with Auburn. It’s still big, though.

Some of the memorable games — good and bad — during that 12-year streak:

Saban said Cody’s second block was “really significant” for that team. “But sometimes in rivalry games you have those kinds of tough tests,” the coach said.

— In 2015, Derrick Henry gave Alabama the lead for good with a 14-yard touchdown run with 2:24 left in a 19-14 win . The Tide defense had two straight sacks and Ryan Anderson knocked the ball loose from quarterback Joshua Dobbs to cement the win in the only other meeting that wasn’t decided well before the final minutes.

“Every loss is painful because you invest so much in it and everyone talked about the culture,” Jones said afterward. “We believed that we were going to win the football game coming here and we came up short.”

— In 2014, it could have been called The Lane Kiffin Game . The former Tennessee head coach returned to Knoxville as Alabama’s offensive coordinator. Alabama won 34-20, scored the game’s first 27 points and got a huge game from wide receiver Amari Cooper.

—Alabama’s 49-10 win in 2016 marked the most lopsided game in the series since the Tide won 51-0 in 1906. Alabama had touchdowns on defense and special teams and Bo Scarbrough scored on an 85-yard run.

— Last season Alabama scored the most points for either team in the series’ 101 games, winning 58-21. The Tide outgained Tennessee 217-6 in building a 28-0 lead after one quarter.

“I grew up watching it, I had the opportunity to play in it, I’ve had an opportunity to coach in it — now on both sides,” Pruitt said. “So this week does kind of get you going right there.”

Streak aside, Saban took time this week to remind any players who didn’t grow up with this rivalry of its significance.

“He was just explaining to us, this game really means a lot to him, and everybody,” Tide defensive end Raekwon Davis said. “So we’ve got to go out there and just execute.”