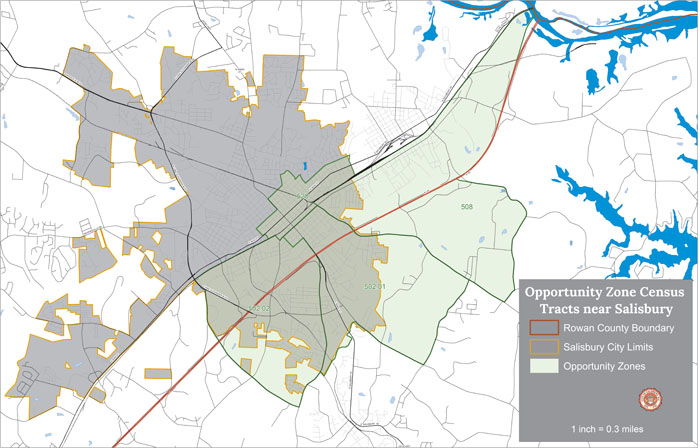 SALISBURY — Following last week’s visit by a White House official to see and discuss local opportunity zones, Mayor Al Heggins on Tuesday pushed the City Council to not lose momentum on the issue.

Heggins said she visited Washington on Friday to speak with representatives of the U.S. Department of Transportation, Rep. Richard Hudson, R-8, and Sen. Thom Tillis, R-N.C.

“As we continue to move forward with opportunity zones, one of the recommendations I kept hearing across the board was how important it is for community to really begin talking about the available properties within your zones,” Heggins said. “What do you want to do in your community? What should you be focusing on with your prospectus? They really encourage every jurisdiction to be able to do their own prospectus.”

A prospectus would outline projects in the community that fall into the category of opportunity zones.

Heggins noted the prospectus that the Rowan County Economic Development Commission is creating with input from Rowan County stakeholders and asked if Salisbury should create its own prospectus.

“In my humble opinion, it is better for a jurisdiction to begin to develop its own prospectus and then feed that into the county because we know here in Salisbury what we best need and the projects that we’re looking at,” Heggins said.

Rod Crider, president of the Rowan EDC, said in an interview Wednesday the prospectus his organization is working on will include properties and parcels in the county that the community has identified as areas best for development. That includes the Empire Hotel revitalization project to transform the former hotel into mixed-use space and an industrial property in China Grove.

Crider said the EDC is already working with city staff. He recommends that if Salisbury wants an independent document it should take the community’s information out. He said the final piece of the prospectus is to include residents’ input.

“This is a tax shelter, and the fact is there are two parties that are integral to the process,” Post said. “One are developers — people who want to build things — and the second is people that have money.”

Heggins said Salisbury should capitalize on opportunity zones now that people are paying attention to the city.

“This is the one Salisbury has the attention around,” Heggins said. “I don’t think we should lose the opportunity and the chance to continue this momentum that we’ve already started with the relationships we have built.”

Several residents spoke during the public-comment period Tuesday, saying they are excited about what tapping into opportunity zones would bring for Salisbury but they are worried about gentrifying neighborhoods.

“I was excited to see mostly the amount of acreage that’s not being utilized that fell into this,” Sheffield said. “Because then we’re not in fear of doing any kind of displacement of housing.”