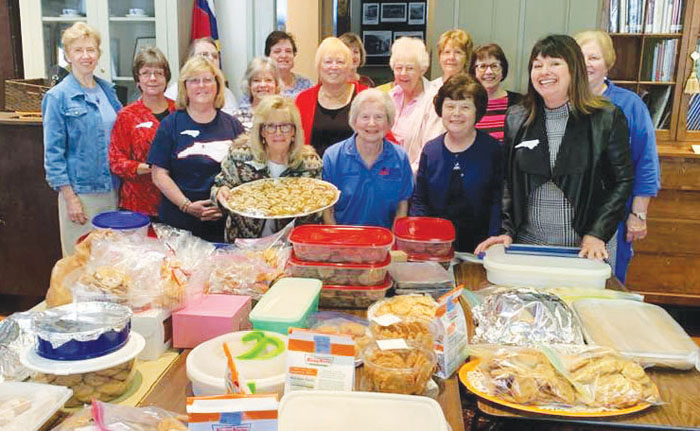 Last Friday, members of Salisbury's Elizabeth Maxwell Steele DAR Chapter made and delivered hundreds of cookies to local fire and police stations as a way of showing their appreciation for those civil servants. The DAR members also are regular servers at the Frontier Coffee Shop for military veterans on Tuesday mornings. Submitted photo

SALISBURY — A dozen members of the Elizabeth Maxwell Steele Chapter of the Daughters of the American Revolution traveled to the High Country of North Carolina on Sunday and Monday as part of a statewide DAR gathering.

The Salisburians’ trip included an overnight stay at Big Lynn Lodge in Little Switzerland, then a Monday journey to Crossnore School & Children’s Home, which is supported by N.C. DAR members.

A highlight of the Crossnore trip was a visit from National DAR President General Denise Doring VanBuren, who arrived Monday morning and was part of a check presentation to the school.

Crossnore School & Children’s Home is a nonprofit organization that provides residential foster care for children in crisis. It serves ages 1 to 21 and has locations in Crossnore, Winston-Salem and Hendersonville.

The organization’s mission is to provide “a sanctuary of hope and healing for children.” The Winston-Salem and Crossnore campuses offer on-site residential care, trauma-based clinical services, and a variety of extracurricular and enrichment activities.

Dating back to 1898, the Elizabeth Maxwell Steele Chapter of the DAR is the state’s second-oldest. North Carolina has more than 100 chapters in eight districts.

The Salisbury chapter is named after one of Rowan County’s famed patriots, Elizabeth Maxwell Steele (1733-1791).

The local DAR members provide a variety of community services. This past Friday, they baked and distributed cookies at Rowan County law enforcement agencies and fire stations.

From 8:30 to 10:30 every Tuesday morning, DAR members act as servers for military veterans who attend the Frontier Coffee Shop, now held at Salisbury’s K&W Cafeteria.

“We are an active organization with a focus on promoting patriotism, preserving American and local history, and supporting education for our children,” according to a website description for the chapter.