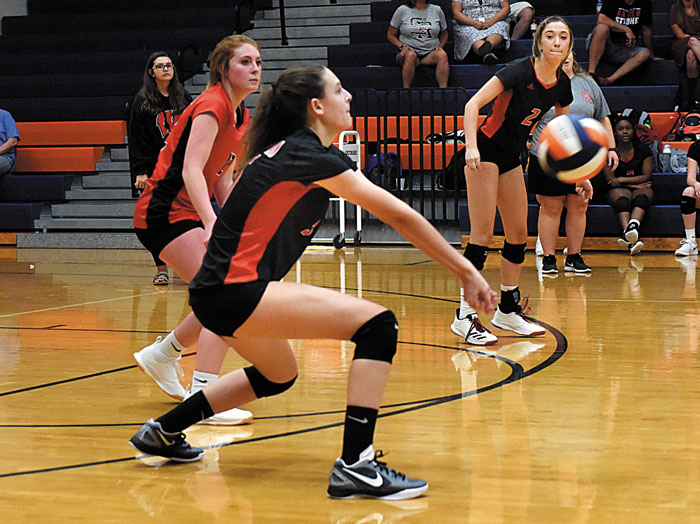 LANDIS — They ran the table.

South (22-1, 18-0) completed a flawless Central Carolina Conference season despite being pushed hard by ninth-place Salisbury (5-15, 3-15) in the middle set.

“We weren’t at our best, but Senior Night means using different lineups and Senior Night is very emotional,” South coach Jenna Horne said. “I’m kind of mad at the girls right now for not playing better, but I’m a lot more proud than mad. These girls have worked really hard all year and stayed together. They’re champions, and that was a goal.”

Ranked eighth in 2A by MaxPreps, South hasn’t come out of nowhere. Led by the Rymer cousins, senior Kira and junior Anna, the Raiders were part of a three-way tie for first place in the CCC last season. They survived a tough fight with Central Davidson on Tuesday to get to Senior Night with their perfect league record still intact.

South flattened the Hornets 25-7 in the first set with Anna Rymer (13 kills, 25 assists) and Kendall Walter getting two aces each and Aleyana “LeLe” Littlejohn, one of South’s four seniors, enjoying a nice run at the service line.

South’s student section chanted, “It’s too easy,” after that first set. They got the excitement they asked for.

The second set was wild. Salisbury started getting a lot more digs and putting lot more serves in. Then the Hornets shocked everyone by pushing in front. Down 12-10, South called timeout.

Salisbury went up 13-10 on one of Marissa Mueller’s eight kills. South caught up at 15-15, and everyone expected the Raiders to pull away, but it didn’t happen. Down 23-21, Horne had to use her last timeout. After that timeout, senior Makenzie McGuire (13 digs) and Kira Rymer had kills for 23-all, but the Hornets still didn’t wilt. Salisbury led 25-24, 28-27 and 29-28, but came up just short. South got the last three points to take the set on a kill by senior Ashlyn Faw (five aces, 14 digs) and back-to-back kills by Kira Rymer, her eighth and ninth kills of a desperately fought set.

“We didn’t play to the best of our ability,” Faw said. “It was a little bit emotional tonight and we were a little nervous for some reason. I think we’ve won so much this year that sometimes we feel like we can win without trying our hardest, but when Salisbury got ahead, we reined everything in and did what we had to do.”

“It was really fun to watch the way we played in that set,” Salisbury coach Andrea Davis said. “We got our chemistry going and we played very well, but we’ve played like that before. We’ve taken some of the best teams in our league to five sets, only to come up short. We’ve come close a lot, and it’s hard when you keep coming close.”

Yang and Mueller had strong matches for the Hornets, but South didn’t leave any doubt in the third set. The Rymers took control immediately for a 5-1 lead that quickly swelled to 18-7. Libero Payton Black, a sophomore who leads South’s defense and serve-receive, finished off the Hornets with a couple of aces. She had 21 digs.

“South has a very solid team, some great girls that I’ve watched grow up at Catawba camps,” Davis said. “I hope they can go far in the playoffs.”

South might play for a while if it plays the way it did in the third set.

NOTES: South’s only loss this season was to 3A West Rowan on Aug. 26 … South’s Senior Night ceremoy included recognizing the five Salisbury seniors — Smith, Caroline Colwell, Jaliyah Oats, Alyssa Lopez and Journie Dawson. “That was a nice touch, very classy, and we appreciated it,” Davis said. … South will be the host team next week for the CCC tournament semifinals (Tuesday) and championship game (Wednesday). First-round games will be played on Monday. … Kira Rymer, who had surpassed 1,000 kills and 1,000 assists might get to 1,000 digs if South has success in the tournament and state playoffs. … Kira Rymer visited LaGrange (Ga.) over the weekend and chatted with a Pfeiffer coach after Thursday’s game. … It was a season-ender for the Hornets.