High school football: Things are falling in line for Falcons 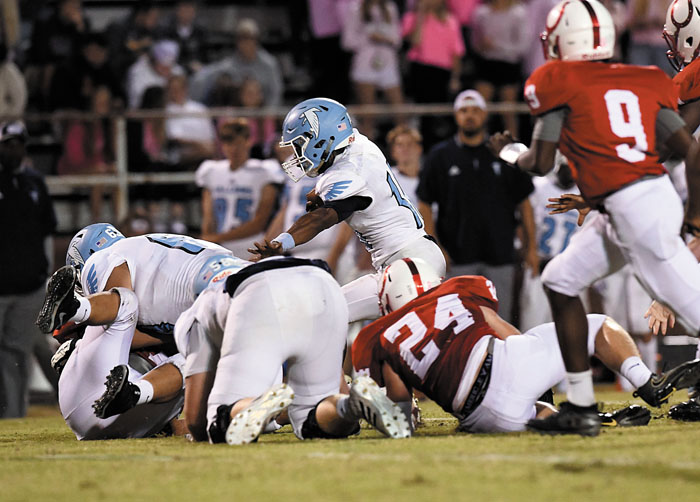 Wayne Hinshaw/for the Salisbury Post ... West Rowan running back Jalen Houston (10), center, follows his blockers through a pile of fallen players, during last Friday night’s victory at East Rowan. Houston and his teammate, Cayleb Brawley, each ran for over 200 yards, a first in the history of Rowan County high school football.

West had exceptional coaching (Scott Young and a great staff), had an exceptional defense (Chris Smith is still in the NFL) that got quick stops, and had an exceptional quarterback (B.J. Sherrill) to run the show. All those elements contributed to a perfect-storm running game. The ultimate tailback (K.P. Parks) and the brawny blockers in front of him just trampled people week after week.

“We’ve got a tradition of very good teams and very good 0-line play here,” Nixon said. “Our guys are working hard to keep that tradition going, but I thought that after K.P. and (Carson’s Shaun) Warren and (North Rowan’s JaReke) Chambers that all the rushing records had been taken care of.”

That wasn’t the case. The Falcons found a unique record to set in last Friday’s 31-7 win against East Rowan in the North Piedmont Conference opener for both teams.

Senior Jalen Houston, a receiver most of his career, rushed for 234 yards on 18 carries. Sophomore Cayleb Brawley, who has gotten 75 carries the last three weeks, added 33 attempts for 206 yards against the Mustangs.

“It’s not like it was something we were shooting for,” Nixon said. “We didn’t even know about it until after the game, but by putting two guys together, we found a new record.”

No Rowan County team, at least not since the Post’s modern record book was established in 1968, had ever produced a pair of 200-yard rushers in the same game.

There were two instances where teams had two different 200-yard rushers in the same season, much less the same game. Joe Pinyan’s option-running Salisbury Hornets got a 200-yard game in 2010 from back Romar Morris (vs. Forest Hills) and another from QB John Knox (vs. Central Davidson), one of only two games in which a Rowan quarterback has rushed for 200 or more yards.

But two 200s by one team in one game? That was history-making.

“I was shocked to hear the stats because it really felt like just a normal game,” said West’s towering left tackle Edwin Fuentes Berrios. “It didn’t feel like we were doing anything incredible. We were just doing what we were supposed to do.”

Evans is essentially part of the offensive line. He’s employed as a blocker, not a receiver. In recent weeks, West’s wideouts have almost become leaner offensive linemen. West ran the ball 56 times to beat Davie. ran it 57 times in a turnover-plagued loss to A.L. Brown and ran it 57 times — for 460 yards — Friday against East Rowan.

West’s bullish big back — Michael Gonsalves — carried 27 times against Cox Mill. Since he went down with a knee injury, West compensated by moving Houston, a track sprinter, from wideout  to the backfield. It’s worked. West is getting the ball in the hands of its most dynamic playmaker a lot more. Houston’s three TDs against East included second-quarter romps of 67 and 75 yards. When he gets a step on the defense, it’s over.

“When a running back takes it to the end zone like that, that’s our satisfaction in blocking,” Berrios said. “That’s what we live for.”

Most of West’s offensive linemen are guys who have been around for a while. Counting Evans as a linemen, five of the six are seniors. Noble, who looks even bigger than his listed height and weight, is the youngster. He’s a sophomore.

“What they all have in common is they’re good kids,” Nixon said. “O-line guys are the ones you don’t have to worry about as far as showing up for every workout. You know they’re going to be there. They care. To be good offensive linemen, you really have to want to be good, and they are always willing to put in the work because they want the team to be good.”

Nixon, of course, was a stellar offensive lineman in his college days at Catawba.

Catawba football is what brought him to this area.

“I can’t tell Jalen a whole lot about how to run the football,” Nixon said with a chuckle. “But I can tell the big guys how to block.”

Berrios has been a feel-good story. A broken thighbone cost him a season. When he came back last year, he swelled to 350 pounds, but lots of work in the offseason trimmed him down to a strong 285.

Hassard is the best-known guy on the offensive line because he had an older brother (Chris) who was an outstanding o-lineman for the Falcons and because he plays basketball. He’s good enough that he was selected to play in this year’s Shrine Bowl.

“Seeing my name on that roster, that was kind of unreal,” Hassard said.

“Going into it, we knew the biggest thing for us offensively was to stay in front of the chains,” Nixon said. “We couldn’t get penalties and we couldn’t have bad plays that put us in third-and-long because that’s when (East head coach John) Fitz brings the pressure. We believe we have the ability to run the football, and that’s what we did against East. We challenged our backs to run hard and we challenged all those experienced linemen to block. They’ve been in tough games. They’ve been in tough situations. They knew what to do.”

West stayed in front of the chains — and, after a 0-0 first quarter, the Falcons, with the offensive line moving with flawless timing and impressive power, started moving the chains.

“We’d put in three new plays for East, and we felt like we would be able to run against their base defense,” Berrios said. “They were smaller than us upfront. A lot of times, we were able to push their defensive linemen into their linebackers.”

So the Falcons are likely to stay on the ground 80 percent of the time to take some of the pressure off sophomore QB Noah Loeblein.

“The running game is working for us,” Hassard said. “We’re physically strong guys to start with, but we also understand the mental part. We do our jobs and none of us are worried about how much recognition we get.  This is a team game. It’s all of us. When one of our backs gets a touchdown, we all get a touchdown. There’s no better feeling than seeing Jalen heading for the end zone.”

When the Falcons go to work, when they go about their business on Friday nights, it’s a reminder that in football, the offensive guys who don’t touch the ball are as important as the ones who do.

The offensive line is frequently compared to the foundation of a house. There are no good teams that don’t have good offensive lines. They are the engine of the car, and if they’re not working together, that car, no matter how fast it can potentially go, isn’t leaving the garage.

“I’m still a believer that football games are won in the trenches,”Nixon said. “The team that blocks the best and tackles the best wins.”

Livingstone returns to Raleigh, taking on Shaw this time