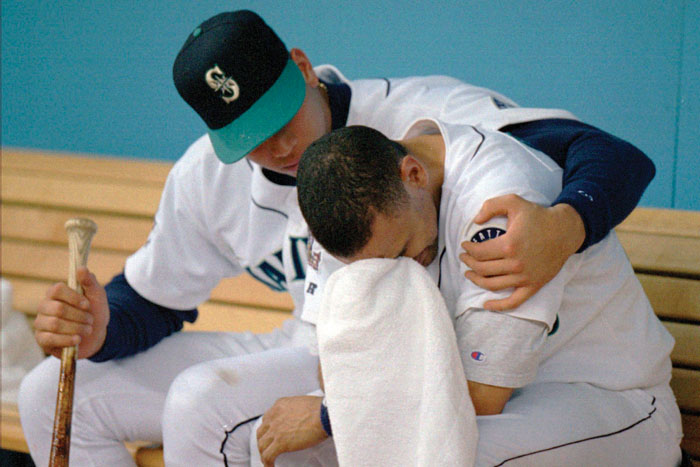 FILE - In this Oct. 17, 1995, file photo, Seattle Mariners' Alex Rodriguez, left, comforts teammate Joey Cora in the Mariners' dugout following the team's loss to the Cleveland Indians in the American League Championship Series, in Seattle. The Seattle Mariners are the only baseball franchise never to advance to the Fall Classic. Baseball has never been played in Seattle beyond Oct. 22. The Mariners have three times been to the American League Championship Series, and all three times were sent home before there could ever be a Game 7. (AP Photo/Jack Smith, File)

SEATTLE (AP) — And then there was one.

The Washington Nationals are off to the World Series for the first time in franchise history after sweeping the St. Louis Cardinals on Wednesday night, becoming the final National League team to reach the Fall Classic and leaving a single team with the distinction of never playing for a title.

Congratulations, Seattle Mariners. Not only do you have the longest playoff drought in professional sports, but you are now the only team that hasn’t been to a World Series.

Since the Mariners came into existence in 1977, there has been a void. Despite lineups that included the likes of Ken Griffey Jr., Ichiro Suzuki, Randy Johnson, Edgar Martinez and Alex Rodriguez, they have just four playoff appearances in their history, all coming between 1995 and 2001.

The Mariners have been to three American League Championship Series and were sent home each time. The city has never experienced a major league ball game beyond Oct. 22.

Seattle’s 1995 playoff run may have saved baseball in the Pacific Northwest. But as memorable as that was, it didn’t end in the World Series. Same for 2001, when the Mariners tied a major league record with 116 wins in the regular season only to be dispatched for the second straight year by the New York Yankees in five miserable games in the ALCS.

Mariners fan Bob Simeone, a season-ticket holder since 1985, said attention focused on the team for its World Series futility is similar to what happened a couple of years ago when Seattle inherited the longest postseason drought.

“We went through a wave of this when the Buffalo Bills made the postseason. … So, we had that,” said Simeone, the commissioner of the Seattle Mariners RBI Club, a group of die-hard fans. “It’s a little bit like the 1995 story. You can only bring it up so many times and it starts to get tedious.”

The woebegone franchise has become somewhat of an afterthought in a city where all the other professional teams have won titles — and almost all coming since the Mariners were last in the postseason in 2001.

The Seahawks broke through with their first Super Bowl win after the 2014 season. The WNBA’s Seattle Storm won championships in 2004, 2010 and 2018. The Sounders won the MLS Cup title in 2016. And the Seattle SuperSonics were the first of the city’s franchises to claim a title with their championship in 1979.

Now, the Nationals’ unlikely playoff run this year has added the Mariners to a notable list of teams in the four major sports who have yet to reach a championship game or series.

Cleveland, Jacksonville, Detroit and Houston have never reached the Super Bowl. Minnesota, Memphis, New Orleans, Charlotte, Denver and the Los Angeles Clippers have never made the NBA Finals. And Winnipeg, Arizona and Columbus are all still waiting for their first Stanley Cup Finals appearances.

But in baseball, it’s only Seattle. And there is little sign the drought will come to an end anytime soon. In the bigger picture of where Seattle sits as a franchise, the World Series is a pipe dream.

The Mariners are in the midst of a full rebuild with the hopes of becoming competitive by the 2021 season, but there’s no guarantee that the prospects Seattle is relying on will become playoff-caliber talents in just a couple of years. By that time, it will have been 20 years since Seattle was last in the postseason.

At this point, just being in a playoff game would seem like a satisfactory accomplishment.

“The best thing about this postseason is looking at the depth of the four squads and you realize what it takes,” Simeone said. “It’s a long mountain to climb, that’s what it really boils down to.”