SALISBURY — A Winston-Salem man was charged with heroin trafficking after a Tuesday evening vehicle chase.

Authorities with the Rowan County Sheriff’s Office said they first crossed paths with Deionte DayShaun Keaton during a June 29 incident at a Woodleaf home where they arrested another man for heroin and cocaine possession. 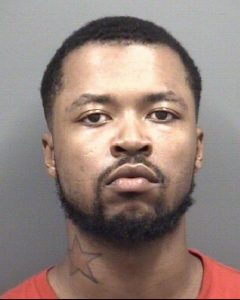 Keaton, 24, was being sought by the Sheriff’s Office on heroin trafficking charges.

Keaton was arrested by the Sheriff’s Office with assistance from the Salisbury Police Department and the N.C. Highway Patrol after a multimile chase through western Rowan County.

Keaton is charged with conspiracy to traffick in heroin; two counts of trafficking in heroin by possession and delivery; and felony fleeing to elude arrest.

On Tuesday, Keaton was spotted in a black 2012 Honda Accord on Miller Road, west of Salisbury. Rowan County deputies tried to stop the Honda, but Keaton sped away. The chase continued onto N.C. 150 and to Sherrills Ford Road, where deputies lost sight of the Honda near Majolica Road.

Investigators found the abandoned Honda in the parking lot of Rolling Hills Apartments, 315 Ashbrook Road. With the help of tips from witnesses citizens, Keaton was found hiding in a dumpster at Rushco Food Store, 2480 Statesville Blvd.

Rowan investigators were aware that Keaton has a residence at 937 Mardon Circle in Winston-Salem.

They contacted the Winston-Salem Police Department, which assisted with a search of Keaton’s residence. That turned up about a half kilogram of cocaine, some marijuana and a firearm.

During the June incident, Rowan investigators arrested Michael Angelo White, Jr., 39, of Midland. White was found with about 562 grams of heroin, 172 grams of cocaine, 14 grams of crystal methamphetamine, and a .380 Ruger, Model LCP, semi-automatic handgun, according to authorities.

Keaton was placed under a $1,550,000 secured bond. He has pending charges in Forsyth County related to the search of his residence.

‘Cried out to God’: Former addict speaks about recovery…