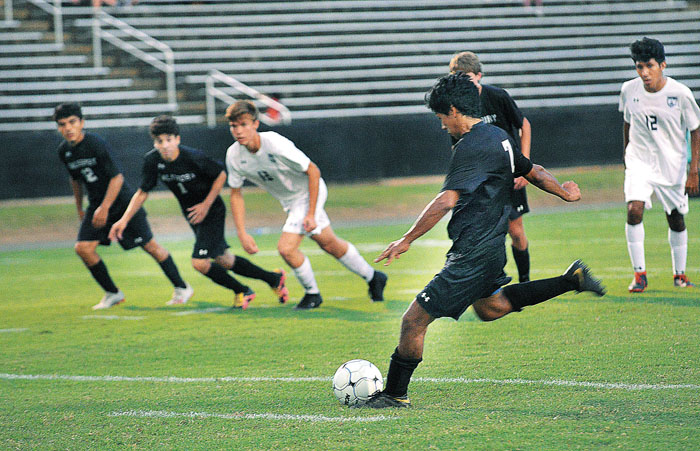 Salisbury's Juan Salazar (7) scores on a penalty kick, during an earlier game this season. The Hornets lost to Oak Grove on Wednesday night, 1-0. ... File photo by Wayne Hinshaw, for the Salisbury Post

SALISBURY — Sometimes one mistake is all it takes to get beat.

Salisbury’s boys soccer team made an out-of-character defensive error early in the second half Wednesday night — and with it, likely waved goodbye to second place in the Central Carolina Conference.

“We’re right there,” coach Matt Parrish offered, moments after the Hornets dropped a feverish 1-0 decision to visiting Oak Grove. “We just need to get out of our own way sometimes. We have a habit of shooting ourselves in the foot at the most inopportune time and tonight it cost us. One play beat us.”

Salisbury (12-6, 9-5) had its five-game winning streak halted and suffered its second one-goal loss to Oak Grove (11-6-1, 10-5). The only score came when midfielder Safin Coogle whipped a penalty kick past keeper Wade Robins five minutes into the second half. The PK was awarded when SHS defender Gabriel Fuentes-Reyes fouled Caleb Schoenberger inside the penalty area.

“There was a lot of bumping and pushing all night long,” said winning coach Daniel Baker. “(Fuentes-Reyes) was the second defender to come into the play and he just kind of checked our guy without playing the ball. That’s a foul.”

“It’s tough, but it happens,” said Salisbury’s Juan Garcia-Cortez. “He was trying to make a play. Now we need to use this as motivation and not get torn down by one loss.”

Even Parrish, the sage guru who has guided the Hornets to 15 conference titles in the past 16 years, agreed with the official’s call. “I don’t think it was a bad call,” he said. “But I think there was a lot of grey area tonight. I thought we had it covered, but in that instance the referee ruled that he was late.”

Each team delivered 11 shots-on-goal, including several crisp attempts that were thwarted by Robins and Oak Grove senior keeper Gabe Rodriguez. Robins (10 saves) extended his left leg to narrowly deflect a certain-goal early in the scoreless first half. Garcia-Cortez had a chance to tie the score with 28:30 remaining, but his blistering, 12-yard drive to the right side was somehow rejected by the fully elongated Rodriguez.

“It was a good shot,” he said afterward. “Just a better save.”

Ten minutes later Salisbury was foiled again. This time forward Will Webb gathered a pass in front, turned toward the cage and rifled a high shot that Rodriguez steered over the crossbar.

“Our keeper probably had the game of his life,” Baker said. “He put the team on his back when we let down on defense.”

Rodriguez finished with 11 saves and posted Oak Grove’s eighth shutout. He was beaten only once — but Josh Portillo’s 30-yard grounder on an indirect kick with 11:26 to play was ruled no goal because it crossed to goal line untouched.

“(The referee) called obstruction, and obstruction is an indirect kick,” Parrish said. “That’s marked by him raising his hand. Had I seen him raise his hand, I would have known that it was indirect. However, I didn’t see him raise his hand and I didn’t hear him call obstruction. I told Joshua to put it on-frame. It was a beautiful strike, the only place that kid hadn’t covered all night long.

“So, maybe I’m to blame,” Parrish continued. “Maybe it’s my fault. But I talked to their coach and he didn’t see his hand go up either.”

“We’ve scored plenty of goals this season off that same kind of setup,” he said. “I was very confused.”

When time expired, a number of Salisbury players kneeled despondently on the field.

“Pain,” Portillo said. “We outplayed them the whole game. We knew we were the better team. We just couldn’t find the back of the net.”

Now comes the hard part for fourth-place Salisbury. It must win each of it four remaining CCC matches to have a shot at second place. Even third — the last of the conference’s automatic state playoff berths — is a tease in the distance, like that beckoning green light Jay Gatsby saw.

“It’s possible we won’t even make the playoffs,” Parrish noted. “We have to win all four — and two of them are against teams that beat us first time around. We could drop from a tie for second all the way to fifth.”

NOTES: Oak Grove defender Calil McNeil was injured with 12:12 remaining and was carried off the field. The Grizzlies are tied for second with North Davidson in the league standings… Salisbury begins its home stretch Monday when conference-leading Ledford visits. The Hornets lost 3-1 when the teams met Sept. 18.