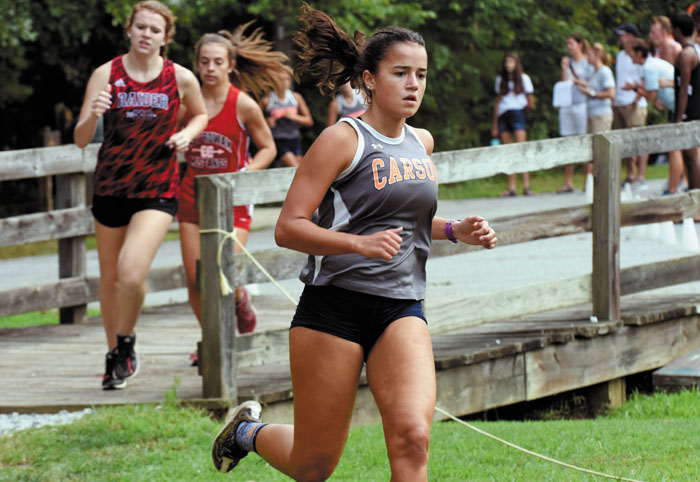 Wayne Hinshaw file photo/for the Salisbury Post ... Carson’s Taylor Conrad took second individually and led her team to the North Piedmont Conference cross country championship, Wednesday afternoon at Salisbury Community Park. She is shown above in a file photo from the pre-county meet in August.

SALISBURY — It was still raining around noon on Wednesday, and Carson senior Taylor Conrad feared an event she’d looked forward to would be pushed back.

“It’s just pouring, and people are asking me if our meet is going to be postponed, but I’m thinking, ‘No, no, no, let’s go!'” Conrad said. “This was my last North Piedmont Conference meet and I had goals I wanted to accomplish.”

The weather cleared. The sun would shine almost as brightly as Conrad.

She was was able to accomplish all three of her goals at Salisbury Community Park.

First, Carson won the NPC team championship for the second straight year, a trophy that will go nicely alongside its Rowan County title.

Third, she wanted to finish second because that’s what she and her friendly rival, East Rowan senior Adalie Harrison, were realistically shooting for. There was never any doubt that North Iredell phenom Jonna Strange, a junior verbally committed to Furman, was going to cruise to her third straight individual title. Strange did what she does. She ran 18:22.

But Carson’s team ruled. Following Conrad across the line were Camden Corley (fifth), Kimberly Barrera (sixth), Carly Green (seventh) and freshman Makayla Borst (ninth). Even the sixth and seventh Carson runners (Megan Deal and Lani Isley) were 12th and 13th in a field of 39.

“I’m over the moon with pride in the grit and determination of this team,” Carson coach Les-lee Ihme said. “This is only the second time we’ve won county and conference in the same year. We’ve accomplished so much, but there’s also a lot left to achieve. I know they won’t be satisfied until we achieve our last goal for the season, which is making it to states.”

Conrad and her teammates were ecstatic with the cool temperatures and pleasant wind that greeted them at SCP, but there were hidden obstacles. The varsity boys had run first, so an already muddy, puddle-packed course had gotten a little more chewed up by the time the girls ran.

“I was slipping and sliding like crazy,” Conrad said. “But when it’s your last conference meet, you try to stay positive.”

While she finished more than two minutes behind Strange, Conrad finished about 35 seconds ahead of Harrison, the county champ. Harrison took third place.

“The start was really slow,” Harrison said. “Just not my day.”

Conrad and Harrison’s individual battles have been back and forth all season, at a lot of different venues.

“We push each other —  and that was the case again today,” Conrad said.

The biggest challenge for all the competitors was the hill that is part of the SCP layout for the NPC Championships.

“We came out here Saturday for practice and we ran the hill three times,” Conrad said with a smile. “Knowing I only had to climb it once today, well, that wasn’t so bad.”

The depth of Carson’s program was on display. Carson’s girls went 1-2-3-4-5 for a perfect score in the girls jayvee race (Carson also won the jayvee boys race).

The Cougars will graduate Conrad, Barrera and Deal, but more girls are lining up to fill their running shoes.

“We’re losing some senior girls and senior boys who have been constants for our program, and it’s going to be hard to let them go because I have loved every single minute of this season,” Ihme said. “But we’ve got promising youngsters who showed today how much potential they have.”