Friday Night Hero: North Rowan’s Turner has a nose for the ball 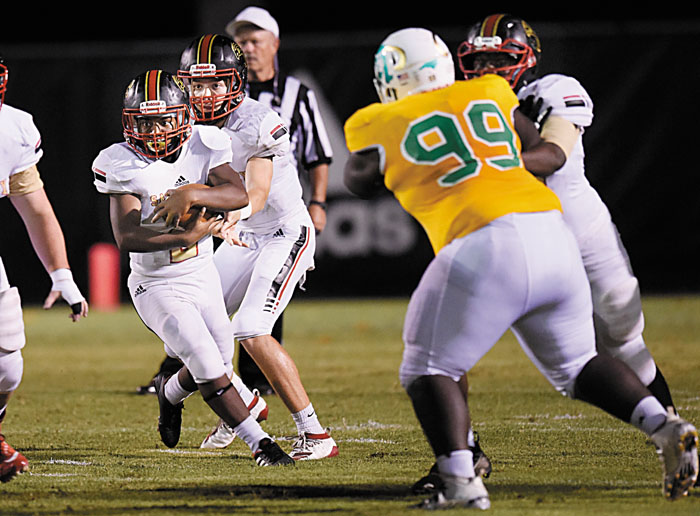 SPENCER — North Rowan had won four in a row, while Albemarle was 2-4, with the two wins coming against a pair of the state’s weaker teams.

When the squads squared off in Albemarle for a Yadkin Valley Conference game last Friday, North Rowan players were expecting to cruise.

But teenagers are unpredictable. The Cavaliers needed several good bounces to escape with a 36-33 victory.

“Let’s just say it wasn’t the game we expected it to be,” said North defensive lineman Malachi Turner. “Albemarle showed us something.”

“We watched film of Albemarle against North Moore (1-5), and North Moore had every chance to win the game,” North Rowan coach Ben Hampton said. “Albemarle is running the option and not looking all that great doing it. But then we go down there, and it’s like, ‘Where did these guys come from?’ They’re not running the option. They’re coming at us with a power game and a gap game, and they’re getting downhill. I’ve got to commend Coach (Richard) Davis. Their kids got after us.”

One of the people the Cavaliers lean on during times of adversity is Turner, a senior and a three-year varsity player. Turner is North’s 5-foot-10, 300-pound nose guard, and his job is usually to use his mass and strength to tie up two blockers up front.  But he’s also nimble enough to hit people — and even catch people. He averages seven tackles per game, which is exceptional for a nose guard. Heading into the Albemarle game, he had 47 tackles, eight tackles for loss, 10 QB hurries and a forced fumble.

One of the vivid memories of North’s season was Turner picking off a pass in the closing seconds of a season-changing, comeback win at East Rowan and dodging and dancing for 15 yards on his surprisingly animated return. North coaches joked about switching Turner to receiver after seeing those moves.

“Because I’m kind of like a ball of meat,” Turner said. “I’m a wide body.”
Turner said his football career began inauspiciously in YFL as a special-teams player, but he knew from the start he wanted to be a defensive lineman. Now he’s living the dream.

Down early, North breathed a sigh of relief when it took a 14-13 halftime lead over Albemarle.

Albemarle scored in the third quarter for a 19-14 lead, but Xzaviar “Zay” Davis returned the Bulldogs’ kickoff for a scintillating touchdown. Davis has had numerous return touchdowns called back  in recent years, but this one stood.

“When a team that’s been losing takes the lead and then gives it right back like that on the kickoff, you expect them to fold,” Hampton said. “Albemarle didn’t. They just kept running the ball at us. They had impressive athletes and a quarterback who could stop on a dime, cut and accelerate and make you look silly. They’re a team that makes you tackle, and we didn’t do a good job of it.”

North was eventually able to slow Albemarle’s ground assault by shifting Turner from the middle of its defense toward a flank. He played as a “5 technique,” lining up across from the outside shoulder of an Albemarle tackle.  It was a challenge for the Bulldogs to budge Turne. He helped take away a side of the field.

“My job was to squeeze down and not let the running backs get outside me,” Turner said. “They had some shifty players. We had to hunker down on defense.”

North trailed 33-22 when the Bulldogs scored with five minutes left, but got a quick score, a stop, a break when Albemarle had a bad snap on a punt attempt, and then another score on Malcolm Wilson’s game-deciding touchdown run with 38 seconds left and the crowd on its feet.

“Our offense made some plays there, but none of it happens if we don’t get that last big stop on defense,” Hampton said.

Turner had been asked to perform a different job than usual, but he handled it.

North survived penalties, bad snaps and fumbles to get its fifth straight win and to move to 3-0 in the YVC.

“There were times when we couldn’t have played much worse, but we hung in there,” Hampton said.

Friday’s comeback was a reflection of North’s season. That season began with disappointing losses to Salisbury, West Rowan and Lexington, but has turned into a winning streak.

Area Sports: Salisbury tennis wins in first round of…