Area Sports: Salisbury tennis wins in first round of playoffs 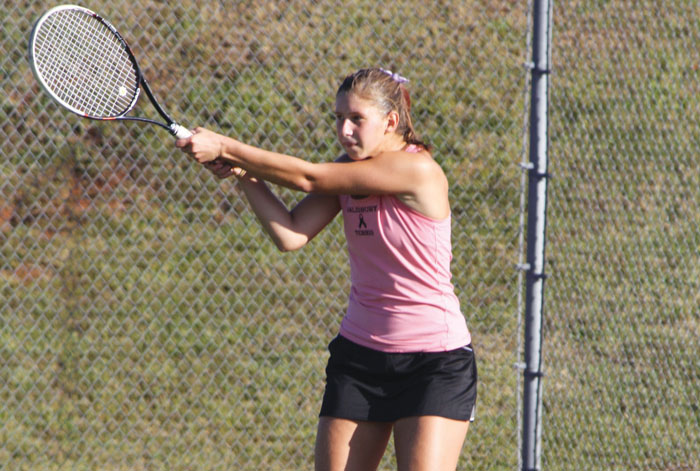 Submitted photo ... Salisbury’s Lillie Rusher, playing No. 1 singles, led the Hornets past Burns, 6-0, on Wednesday afternoon, in the first round of the state 2A playoffs. The Hornets are now 13-0 this season. See Page 2B for details.

Salisbury’s girls tennis squad  opened the 2A dual team state playoffs with a 6-0 home victory against Burns on Wednesday.

The Hornets (13-0) swept the singles matches and didn’t have to play doubles.

Salisbury will play its second-round match  on Oct. 22

Oak Grove topped Mount Pleasant 8-1 in a 2A first-round matchup played on Wednesday.

Individual regionals are set for this weekend.

Leon had three assists. Salvador Bautista.  Vasquez, Turcios and Aleksis Suarez had one each.

Chris Mercado made six saves for the Falcons.

Mario Lecca scored on a free kick for the Mustangs.

Allen Sanchez and Adrian Delgado scored for Carson in a 3-2 loss to North Iredell on Wednesday.

Sanchez had an assist.

Senior Jonathan Quintero scored a pair of goals while junior Caleb Bratager notched a hat trick in Pfeiffer’s 5-0 win against Methodist on Wednesday.