SALISBURY – Aryn Wright-Thompson, the lead actress in the new movie “Overcomer,” will share the story of her “search for identity” in the main sanctuary at First Baptist Church, 223 N. Fulton St., at 6:30 p.m. Sunday.

Wright-Thompson will also share some behind-the-scenes stories about the film. 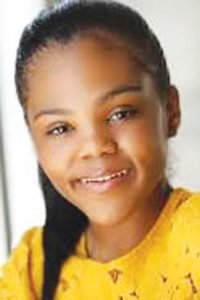 The movie, which was released in August, is based on the story of a high school basketball coach named John Harrison, played by Alex Kendrick, whose team faces uncertainties when the local manufacturing plant shuts down. As many people move away, John is faced with the task of having to coach cross-country. His outlook changes after meeting Hannah Scott, played by Wright-Thompson.

Wright-Thompson, a native of Sanford, stepped into a role that “mirrored her own life.” Hannah is in a single-parent home and does not quite fit in with her peers.

Wright-Thompson is a junior and an honor roll student at South Lee High School. She enjoys ballet, jazz, volleyball, basketball and softball. She has also participated in pageants, including the Miss North Carolina Little Miss and Black Miss North Carolina programs.

Rod Kerr, minister of education at First Baptist Church, said she became interested in acting while watching the Disney Channel at the age of s7even.

“She and her brother, Ari Wright-Thompson, both share a passion for acting. When she felt her brother was getting more roles than she was, she wanted to give up and quit acting. A week later, her mother told her that she got an audition for a new movie,” Kerr wrote in an email.

Kerr said two weeks later, Wright-Thompson received a call back for a reading.

Wright-Thompson, who struggles with anxiety, said to fulfill her role her prayer was: “Lord, just let me glorify you and do a good job.”

‘Cried out to God’: Former addict speaks about recovery during United Way update

SALISBURY — There are faces behind the disease of addiction, says Briana Stout. “I’m not here because I’m different than... read more