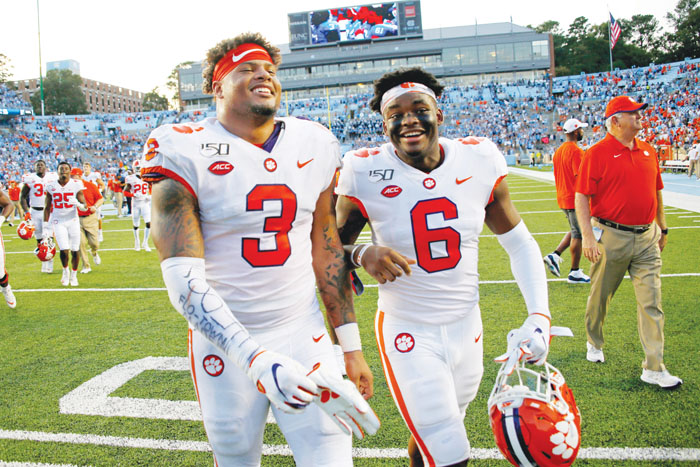 The Southeastern Conference’s West Division has the top two teams in the country in Alabama and LSU, defending national champion Clemson is right behind them and a host of others are lurking at the midway point of the season.

Jalen Hurts has made the most of his transfer to Oklahoma and become the Heisman Trophy front-runner. Joe Burrow has turned LSU into one of the hottest offenses going. Justin Fields has proved to be a smooth operator at Ohio State. And Auburn freshman Bo Nix introduced himself as the leader of the next wave of young quarterbacks.

Enough of the big picture stuff, though.

Here’s a look at the best snapshots from the season so far.

Clemson nearly saw a 19-game win streak end when North Carolina pushed the Tigers to the brink Sept. 28. The Tigers, ranked No. 1 at the time and 27-point favorites, were up just 21-20 with 1:17 left after Javonte Williams scored for the Tar Heels. Mack Brown, in the first year of his second go-round at Carolina, decided to go for two and the win, but quarterback Sam Howell was stopped short on his option run. Clemson recovered the onside kick, ran out the clock — and breathed a sigh of relief.

ONE FOR THE BIG FELLAS

Texas’ Samuel Cosmi lived every offensive lineman’s dream when he caught a lateral from Sam Ehlinger and rumbled 12 yards for a touchdown in a 42-31 win over West Virginia on Oct. 5. Cosmi lined up in his usual spot at left tackle and, at the snap, took a few steps back while Ehlinger rolled right.  As West Virginia’s Reese Donahue closed in on Ehlinger, the quarterback flipped the ball left and backward to Cosmi. The 6-foot-7, 300-pound sophomore caught the ball, tucked it in his left arm and ran down the sideline, barreling into the Mountaineers’ Darius Stills as he bulled his way into the end zone.

Tulane looked as if it would be content to go to overtime with its game against Houston tied 31-all on Sept. 19. Looks are deceiving. With the ball at the Tulane 29 and 18 seconds left in regulation, quarterback Justin McMillan took two quick kneel-downs. On third down, McMillan faked a kneel-down, slipped the ball to tailback Amare Jones and ran right. Meanwhile, Jones took off left and picked up 18 yards. On the next play McMillan threw a 53-yard touchdown pass to Jalen McClesky for the 38-31 win.

California used a goal-line stand as time ran out to beat Mississippi 28-20 on Sept. 21, the Bears’ first road win over an SEC school since 1977 and the Pac-12’s first since 2010. The Rebels started their final drive at their 10 with 2:45 left. Freshman backup quarterback John Rhys Plumlee completed six straight passes to get Ole Miss to the Cal 10. On fourth-and-goal inside the 1, senior linebacker Evan Weaver swooped in from the outside and stopped Plumlee on a sneak as the clock hit zeroes for the last and most important of his career-high 22 tackles.

UCLA rallied from a 32-point deficit in the middle of the third quarter to beat Washington State 67-63 on the road Sept. 21 in the highest-scoring Pac-12 game in history. Dorian Thompson-Robinson threw for four touchdowns and ran for two others during the comeback, which saw the Bruins outscore WSU 50-17 in the final 19 minutes. UCLA capitalized on four WSU fumbles in the second half. In 2017, UCLA erased a 34-point deficit to beat Texas A&M 45-44. The largest Football Bowl Subdivision comeback was in 2006, when Michigan State beat Northwestern 41-38 after trailing 38-3 in the third quarter.

KING FOR A DAY

Perhaps the best feel-good story, eventually tempered by a social media flap, came off the field with 23-year-old Iowa State fan Carson King raising almost $3 million for the University of Iowa Stead Family Children’s Hospital. King attended ESPN’s “College GameDay” show in Ames, Iowa, on Sept. 14 and held up a handmade sign reading “Busch Light Supply Needs Replenished.” The handle for his Venmo mobile payment account was included. Donations far exceeding his expectations came in, and he decided to send the money to the hospital. All was well and good until a Des Moines Register reporter discovered racist tweets King sent as a high school sophomore, prompting King to apologize. The reporter was fired when he also was found to have sent racist tweets.