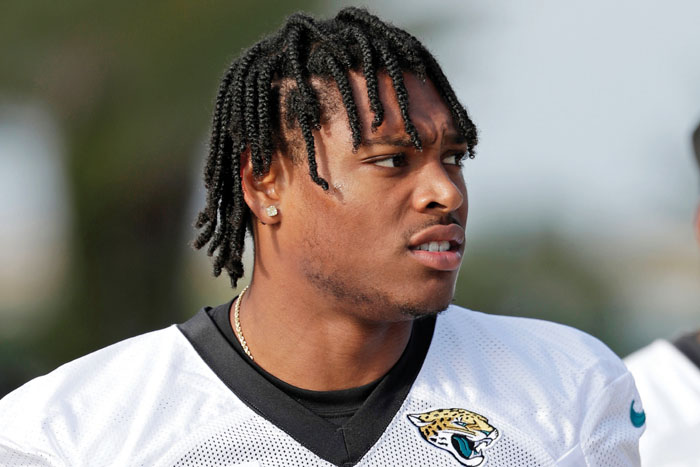 FILE - In this June 11, 2019, file photo, Jacksonville Jaguars cornerback Jalen Ramsey walks to the field for an NFL football practice in Jacksonville, Fla. Ramsey is expected to return to practice two days after seeing a back specialist. The Jaguars host New Orleans on Sunday, Oct. 13. (AP Photo/John Raoux, File)

LOS ANGELES (AP) — The Los Angeles Rams acquired Jalen Ramsey from the Jaguars on Tuesday night, ending the star cornerback’s tumultuous tenure in Jacksonville with a trade to the defending NFC champions.

Ramsey is one of the NFL’s elite defensive backs, earning two Pro Bowl selections and one first-team All-Pro nod in three seasons with Jaguars. The fifth overall pick in the 2016 draft has nine career interceptions along with innumerable conflicts with his coaches, the front office and the Jags’ opponents.

One month after he requested a trade, Ramsey is off to the West Coast to join Aaron Donald on the Rams’ defense.

Ramsey has missed the Jaguars’ last three games with an apparent back injury, but he returned to practice last week. He’ll probably need to play immediately with the Rams (3-3), who are without both of their usual starting cornerbacks as they head to Atlanta this weekend.

The defending NFC champions traded cornerback Marcus Peters to Baltimore earlier in the day, getting depth linebacker Kenny Young for a two-time Pro Bowl selection who will be a free agent next year. Los Angeles also put cornerback Aqib Talib on injured reserve Monday after he missed last weekend’s loss to San Francisco with a rib injury.

Ramsey had never missed a start in his professional career before his current injury, but that was about the only certainty around the Tennessee native who once committed to USC, only to end up at Florida State.

Ramsey’s relationship with the Jaguars frayed in recent months. He had a public spat on the sideline with coach Doug Marrone in Week 2 at Houston, and he clashed with personnel chief Tom Coughlin after the game.

The Jags made their move five days after owner Shad Khan said he had a “heart to heart” with Ramsey and expected him to play against New Orleans last weekend. Ramsey didn’t, prompting Khan’s decision to move on from the disgruntled defender.

Ramsey is under contract through the 2020 season after the Jaguars exercised his fifth-year, $13.7 million option in April — at the same time Ramsey apparently was upsetting Coughlin by skipping the Jags’ voluntary offseason workouts.

Coach Sean McVay’s Rams have had few problems molding together plenty of strong personalities in recent years, and Ramsey’s upside is tremendous — even at the heavy cost of two first-round picks.

Ramsey will join two prominent ex-Jaguars in Los Angeles, all three of whom were top-5 draft picks by Jacksonville.

Pass rusher Dante Fowler re-signed with the Rams after he was traded from Jacksonville at last season’s deadline, while quarterback Blake Bortles is Jared Goff’s backup after five years with the Jags.

The Rams are on their first three-game losing streak of McVay’s tenure, although their sputtering offense likely deserves more blame than the defense.

Los Angeles hasn’t made a first-round pick since 2016, when Jared Goff was the first overall selection.

AP SOURCE: TITANS TO START RYAN TANNEHILL INSTEAD OF MARIOTA

NASHVILLE, Tenn. (AP) — A person familiar with the decision says the Tennessee Titans will start Ryan Tannehill at quarterback instead of Marcus Mariota on Sunday against the Los Angeles Chargers.

Coach Mike Vrabel benched Mariota in the third quarter of a 16-0 loss Sunday in Denver, the first time the No. 2 pick overall in the 2015 draft had been pulled from a game for poor play and not because of injury. Vrabel said Monday the Titans (2-4) would decide who would start against the Chargers (2-4) by Tuesday and then tell both quarterbacks and the rest of the team.

The Titans told Tannehill he would start for the first time since Tennessee acquired the quarterback in March in a trade with Miami, according to the person who spoke on condition of anonymity to The Associated Press because the team has not announced the decision.