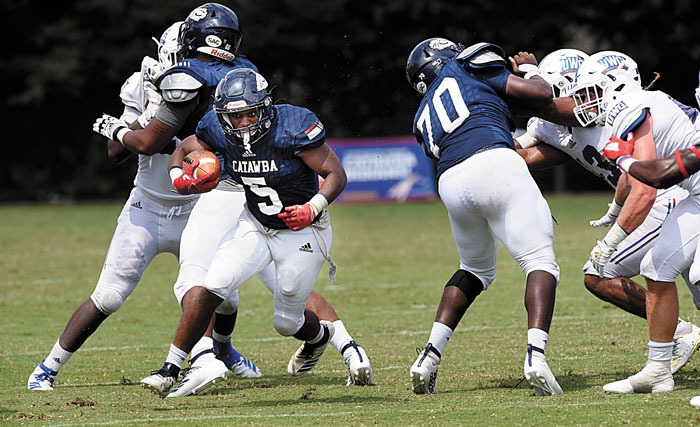 Wayne Hinshaw file photo/for the Salisbury Post ... Catawba running back Demonte Good (5) gets a block from lineman Darius Jackson (70), during an earlier game this season. Good had a solid game against Carson-Newman last Saturday and leads the the Indians into this Saturday’s home game against Newberry. Kickoff is at 12 noon, at Shuford Stadium.

When you’re 1-5, when you’ve lost three South Atlantic Conference games in a row, when just about every meaningful goal for the season is already out the window,  you’re concerned a lot more about the future than the past. Saturday’s 59-14 loss at Carson-Newman is in the rear-view mirror. Catawba hopes to move on.

Catawba introduced some of its bright-eyed, muscular youngsters —  true freshmen linebackers Landen Johnson and Christian Bennett (East Rowan) and safety D’verik Daniel — at Tuesday’s press conference. Those three already are on the depth chart as second teamers, which is good news and bad news. It’s nice that they’re already contributing, but in a perfect world they’d be red-shirting, rather than learning the ropes under fire.

But redshirts are a luxury depth-hungry Catawba sometimes can’t afford. Eleven true freshmen are listed by Catawba sports information as the top backup on offense or defense. That’s not even counting the kicking game — punters, kickers, holders, long snappers. That vital component of Catawba’s squad is in the hands of freshmen.

Neither Walker nor Ward blamed injuries, but they’ve obviously impacted Catawba’s fortunes. Heading into this season, the Ken Avent-to-Will Sweeper passing combination figured to be the most dynamic segment of Catawba’s offense and one of the best throw-and-catch duos in the league.

Avent went down before he ever threw a pass. A hobbled Sweeper played briefly in one game and has one catch for 3 yards. Sweeper averaged 22.8 yards per catch last year and caught a half-dozen long touchdowns, and fear of Sweeper went far beyond the stats. He stretched defenses. He helped make life easier for everyone else.

Stepping in for Avent, Davis has thrown for 982 yards in six games and rushed for a net of 291. Those are pretty fair numbers. He’s accounted for seven touchdowns (5 passing, 2 rushing), while throwing seven interceptions. He’s mobile and fearless. Those are positive traits.

“We’re trying to play to KD’s strengths, to put him in position to attack defenses and do what he does best,” Ward said.

A 75-yard run on Saturday helped boost running back Demonte Good’s stats, which already were surprisingly, well … good. He’s rushed for 418 yards. He and Davis have provided just about all of Catawba’s ground assault after Nasjae Bryant went down with an injury. Andrew Bynum is the No. 2 back now.

“The key rushing stat, the first thing we look at, is yards per attempt,” Ward said.

Good is at 4.1 yards per carry. Last year, as the second half of a 1-2 punch with Kenyatta Greene, he averaged 4.4. The explosive Greene averaged 4.9 per carry. Catawba knew going into this season that it wouldn’t be easy to replace that. He was a special talent.

Catawba’s offensive line has encountered  setbacks, but basically it’s as healthy as can be expected at this point.

“We’ve had one guy out, but we’re still intact on the offensive line,” Ward said. “Last year, we weren’t.”

Defensively, Catawba obviously has issues. Allowing 111 points the last two weeks doesn’t leave much room for argument, but it does leave a lot of room for improvement.

A massive problem for Catawba has been third down — on both sides of the equation. Catawba’s offense is converting third downs into first downs at a sub-par rate (31 percent) and Catawba’s defense is allowing third-down conversions at a truly awful rate (54 percent).

Out of 166 D-II teams, Catawba’s offense ranks 133rd in third-down efficiency. Catawba’s defense ranks a dismal 164th out of 166 on stopping people on third down, so the defense has to spend way too much time on the field.

Catawba has been out-rushed and out-passed,  has lost the season turnover battle (9-7) and has been absolutely demolished in kickoff and punt return yardage, but the biggest factor in being 1-5 is the third-down struggle. Fix that, and a lot of things might fall into place.

It didn’t help Catawba last Saturday that it was playing a Carson-Newman team that is the very best in D-II at converting on third down. The Eagles get into third-and-short a lot and they convert a fantastic 60 percent of the time.

“Things were going OK at Carson-Newman,” Walker said. “We’ve forced two turnovers, we’re moving the ball, and we’re down a touchdown in the second quarter. But then adversity hits, and we don’t handle it well. A couple of things go badly. The next thing you know it’s 21-0.”

The magnitude of Saturday’s 45-point defeat — the most lopsided setback in the long series with Carson-Newman — probably means personnel tweaks for the Indians. When you lose 59-14, you can’t keep doing the same thing and hope it gets better. You have to try to find solutions.

Ward said Walker has done a terrific job this week of counseling, of preparing players to do a better job of battling through it when adversity strikes.

But there’s adversity in every South Atlantic Conference game. Catawba will be tested again this week.

“My goal is to try to bring energy and keep everyone up,” said Johnson, who came to Catawba from perennial power Dudley High in Greensboro. “Everyone talks about the speed of the game changing from high school to college, but it hasn’t changed all that much for me. The adjustment for me has been all the mental reps. Your practice reps in high school are mostly physical, but in college, you’re getting a lot of your reps watching film.”

Daniel was  a linebacker/strong safety tweener who played both positions in high school in Gainesville, Fla. A Florida Gator fan, he became interested in Catawba after talking to former Catawba receiver Devonte Tanksley, who played for a high school across town from Daniel. Catawba coaches like the way Daniel, who hits hard, can play in space, so he’s working at safety, learning from veteran DBs such as Trey Murray and Cris Page.

Bennett talked about the adjustments a college freshman has to make academically and socially as well as on the football field.

“You’re on a much stricter schedule, always getting up early to get somewhere on time,” Bennett said. “As far as football, I’ve just been trying to find ways to help the team. When I get in there, I go all-out and try to make a play.”

Bennett has been playing on most of Catawba’s special teams.

“We’re working to get the stuff that went wrong Saturday cleaned up,” Bennett said.

His chance of also becoming an impact linebacker for the Indians is probably coming sooner, rather than later.

“Johnson, Bennett and Daniel, they’re physically ready to play,” Walker said. “It’s been a matter of gaining experience, of adjusting to college football, of learning the system. And each week at this level brings a different scheme. One week, we’re playing a throwing team (Limestone) and the next week it’s a running team (Carson-Newman). They’ll be good players. We believe in them.”

Catawba’s next action will be taking on SAC foe Newberry (2-4, 2-2)  in the first Saturday afternoon home game since opening day. Kickoff at Shuford Stadium is set for 12:05 p.m.