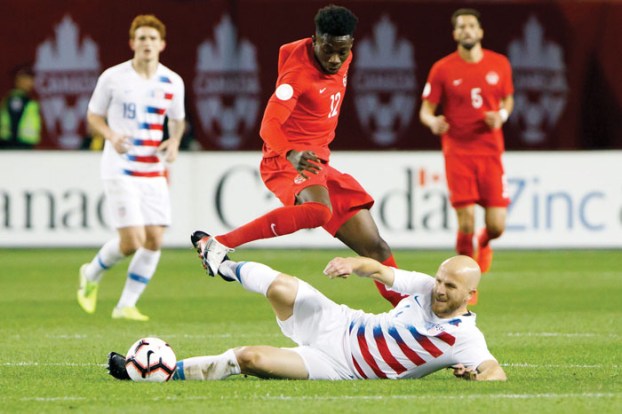 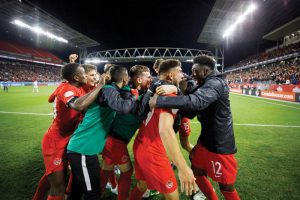 Canada midfielder Alphonso Davies (12) looks at forward Lucas Cavallini as they celebrate Cavallini’s goal against the United States during the second half of a CONCACAF Nations League soccer match Tuesday, Oct. 15, 2019, in Toronto. (Cole Burston/The Canadian Press via AP)

By IAN HARRISON Associated Press
TORONTO (AP) — The U.S. keeps coming up with underwhelming performances in its first year under Gregg Berhalter, whose tenure as American coach is starting to draw criticism.
Canada beat the United States for the first time in 34 years, getting second-half goals from Alphonso Davies and Lucas Cavallini in a 2-0 victory over the listless Americans on Tuesday night in the CONCACAF Nations League.
A little over two years after the Americans failed to qualify for the 2018 World Cup by losing at Trinidad and Tobago, they saw their 17-match unbeaten streak against their northern neighbor come to an end. They had not even allowed a goal to the Canadians in four previous matches dating to 2007.
“The first thing that stands out to me is desire, the desire of Canada,” Berhalter said. “Give them credit, but having said that, the minimum we expect is to match that. We need to compete on every single play in games like that, and that’s important. I don’t think it was lack of effort, I don’t think it was purposeful, but I wasn’t happy with the desire that we displayed.
The U.S. already had lost to Mexico in the CONCACAF Gold Cup final in July, the first competitive tournament after Berhalter was hired last December and tasked with rebuilding the program. Just 11 months remain before the start of qualifying for the 2022 World Cup.
Canada went ahead in the 63rd minute after Scott Arfield dispossessed Michael Bradley on the edge of the center circle. After several passes, U.S. captain Tim Ream made a poor clearance. The ball was played back toward the American goal, and Anfield’s low cross went across the goalmouth. Davies got behind DeAndre Yedlin and Aaron Long, redirecting the ball in.
“What stands out to me is just the sloppiness with the ball,” Berhalter said. “Too many mis-controlled touches, too many missed passes, too many easy things that we normally make that we weren’t making tonight.”
Jonathan Osorio lifted the ball behind the American defense in the first minute of stoppage time. Cavallini allowed the ball to bounce twice and beat Steffen to the near post with a right-footed shot from 12 yards.
“We didn’t have the same energy that they did,” star American midfielder Christian Pulisic said. “That’s very disappointing. That’s the one thing that we can control and we weren’t able to tonight.”
Pulisic had a point-blank shot saved by goalkeeper Milan Borjan in the 51st minute.
“I should have scored no problem,” Pulisic said. “That’s on me. Just wasn’t my day, I guess.”
Pulisic was replaced by Paul Arriola in the 60th minute. Berhalter said Pulisic has been suffering from flu-like symptoms and a “light fever.”
“He wanted to continue,” Berhalter said. “You could see the disappointment in his face.”
The 21st-ranked U.S., coming off last week’s opening 7-0 home rout of Cuba, had nine wins and eight draws against Canada since a 2-0 exhibition defeat at Vancouver, British Columbia, in April 1985.
Canada, ranked 75th, is trying to climb past No. 72 El Salvador and into the top six in the region in FIFA rankings. The June 2020 rankings will be used to determine the nations in the hexagonal will produce the three direct qualifiers from the North and Central American and Caribbean region for the 2022 World Cup
Davies, an 18-year-old budding star, said he felt “millions of emotions running through me on that goal.”
“They treated it like it was a cup final,” Bradley said. “They stepped up harder, they reacted quicker to every loose ball. In all the little ways in a game like that, they were on top of things. We’re disappointed with ourselves that we couldn’t do more in terms of better reactions, stepping up harder, coming away with little plays in different parts of the field that make a bigger difference.”
The U.S. and Canada meet again Nov. 15 at Orlando, Florida, and the U.S. faces Cuba four days later George Town, Cayman Islands.
“We’ve got to respond in a strong way,” Bradley said.
___
More AP soccer: https://apnews.com/apf-Soccer and https://twitter.com/AP_Sports