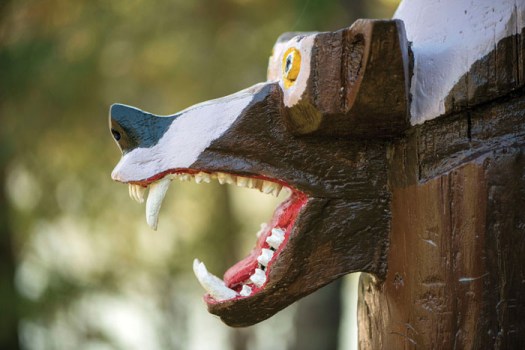 One of the features on the totem pole is a bear. Jon C. Lakey/Salisbury Post 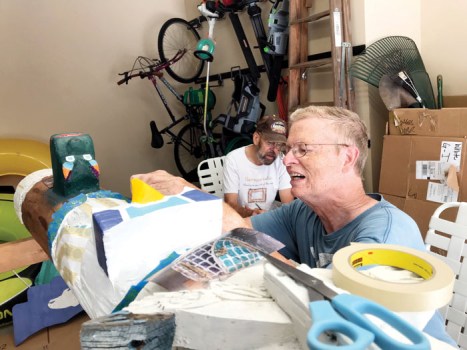 Mark Scott and his neighbor Marty Walker work to restore a totem pole in Scott's backyard on High Rock Lake. Scott's father designed and built the pole after seeing Native American totem poles on a cruiise to Alaska. Submitted photo 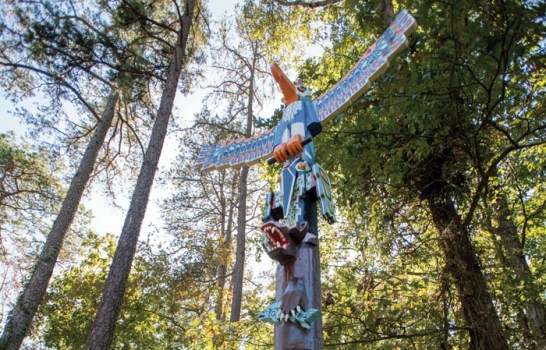 Mark and Cathy Scott moved a totem pole that his father designed for his home in Yakima, Washington, to their backyard on High Rock Lake. Jon C. Lakey/Salisbury Post

SALISBURY – As a way to commemorate his father’s life, Mark Scott recently relocated a totem pole that his father built more than 20 years ago.

Scott and his wife, Cathy, moved the totem pole from the Yakima, Washington, backyard of his late father, Cecil Scott, to their own backyard in Salisbury.

“We were out visiting my mother, and she and I were talking about the totem pole and we were saying, ‘Hey, it’d be really nice to keep this in the family somehow.’ So that was the motivation,” Mark Scott said.

He contacted the current owner of the Yakima house and introduced himself as the son of the previous homeowner. Scott told the owner that he wanted to move and refurbish the totem pole.

The pole took Mark’s father about two years to complete. It was installed in 1994.

“He wanted to create a totem pole after being inspired through a cruise he partook in while in Alaska. He was kind of an ‘artsy’ guy,” Mark said. “He and my mother would take cruises and trips, and this was just one of the trips that they took.” 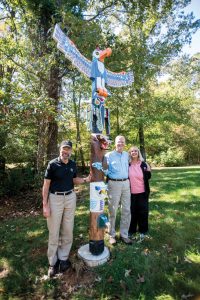 When Cecil Scott moved from Yakima to Seattle, the totem pole remained at the Yakima property.

“He and my mother had eventually sold that place and moved back to Seattle. My mother always wanted to get back to Seattle. She tolerated staying in Yakima after my father retired from the Army,” Mark Scott said.

Mark was determined to retrieve the pole and hold on to his family history.

Cathy Scott said the homeowner was devastated, not knowing whether the pole would be with someone who valued it.

“The homeowner really liked the totem pole. She was thrilled that we had a connection to it. So we found a moving company and had it shipped to us,” Cathy said.

The totem pole was shipped to their home on High Rock Lake, where they’ve lived for 10 years. 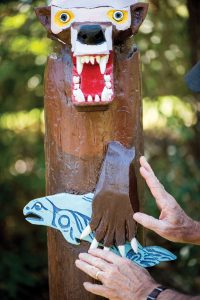 JON C. LAKEY/SALISBURY POST The bear on the pole has a paw with a salmon. Mark Scott and his neighbor Marty Walker recently completed the unusual task of restoring and erecting a totem pole in the backyard of the Scott home on the banks of High Rock Lake.

The Scotts wanted to be able to see it from their back deck and their dock.

Mark came up with a plan to restore the totem pole with the help of a friend, Marty Walker.

The two worked on the project for two years in Mark’s garage.

“We sanded it down to the bare wood. We put linseed oil on it to better protect the wood, two sets of primer on it, and tried to keep the color scheme as closely to what he had,” said Mark. “We applied two coats of primer, painted it and placed a sealer over the paint.” 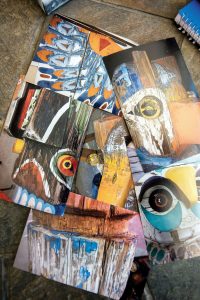 JON C. LAKEY/SALISBURY POST A pile of detail photos of the pole before the work was done on it lays on a table in a collage.

The totem pole includes a display of a thunderbird, a raven, a bear with a fish in its mouth, an owl, and a beaver.

“I’m torn between the beaver and the bear being my favorite part,” Mark said.

The pole is about 20 feet tall, standing 12 feet tall and buried 8 feet below ground.