Scott Stone says he wants to return to Raleigh.

Filing begins in early December, and the field is already beginning to get crowded, with multiple Republican and Democratic candidates declared. 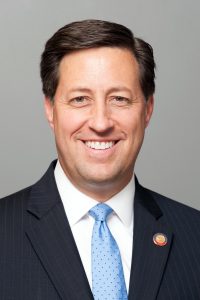 Stone says he is the total package, with experience owning a business and serving in the General Assembly.

“Each of them has something unique that, in most cases, I bring that as well, but in one package,” Stone said. “I’ve got a deep business background that has prepared me for this and helps me being able to impact the state government from a business perspective.”

Being in the legislature helped him understand how it operates, Stone said. So on Day 1, if elected, he will have an understanding of state government. The job responsibilities include serving as president of the N.C. Senate.

He said the role of lieutenant governor is “a force of personality position” in which he would use his leadership skills to show the best ways to be effective.

He says his experience in business has allowed him to be a practical leader.

“Candidates will say they want a government to be run like a business,” Stone said. “I don’t think they know what that means. To me, the best way to do that is to have clear metrics for how people are evaluated, have it be transparent, have it be accountable, and when people can see the results that accountability of business.”

Stone’s campaign will focus on reduction of corporate and personal taxes, teacher pay raises and affordable education, and transportation improvements.

Poll: North Carolinians believe certain groups of illegal immigrants should be allowed to stay in U.S.

A new High Point University and Greensboro News and Record poll finds that a majority of North Carolinians believe certain groups of illegal immigrants should be allowed to stay in the United States.

Those who are serving in the military, are working and paying taxes and are married to U.S. citizens or legal residents received the most support.

The poll asked North Carolina residents whether they think illegal immigrants who fall into several categories should be allowed to stay in the country.

Just less than half — 47% — of North Carolinians said local police departments or sheriff’s offices should not assist federal authorities in apprehending illegal immigrants who have not committed crimes. Thirty-nine percent said local police departments and sheriffs should help federal authorities in arresting these immigrants.

U.S. Rep. Richard Hudson, R-8, announced Thursday that he plans to join his colleagues to introduce legislation to impose severe sanctions on Turkey after that country launched military operations in northern Syria against U.S.-allied Kurdish forces.

“I am sickened by Turkey’s attack on our Kurdish allies,” Hudson said. “This invasion is a direct threat to our national security, and it will pave the way for ISIS to re-emerge. (Turkish President Recep) Erdogan needs to back down and stop these atrocities or he’ll be met with crippling sanctions.”

Hudson and a group of representatives led by House GOP Conference Chairwoman Liz Cheney, R-Wyo., plan to introduce legislation to impose sanctions against Turkey in response to Ankara’s military offensive. The move follows a similar effort led by Sens. Lindsey Graham, R-S.C., and Chris Van Hollen, D-Md., in the Senate.

“I have very serious concerns with this decision and the grave consequences for our national security,” Hudson said. “A premature withdrawal of U.S. forces from the region would create a power vacuum and embolden terrorists to thrive and grow. Further, it would be an abandonment of our Kurdish allies who played a critical role in destroying the ISIS caliphate. I have expressed these concerns to the president on several occasions and look forward to more clarity on the administration’s plans going forward.”

House Bill 283 received unanimous approval in both chambers of the legislature.

Conner’s Law would increase the penalty for assaulting a law enforcement officer, probation officer or parole officer with a gun.

Conner’s Law ensures that anyone who shoots a law enforcement officer will spend time in prison. The law extends penalties for those who assault emergency personnel and cause serious bodily injury or using a deadly weapon.

Cooper called Conner’s wife, Miranda, to inform her that the bill is now law.

“Law enforcement officers put themselves in harm’s way every day, and we should never forget the sacrifice of those who have fallen in the line of duty,” Cooper said. “I have spoken to Trooper Kevin Conner’s family and know how much he meant to them and to his community and our state. I hope that in his honor and memory, Conner’s Law will help prevent future violence against the brave men and women who keep our communities safe.”