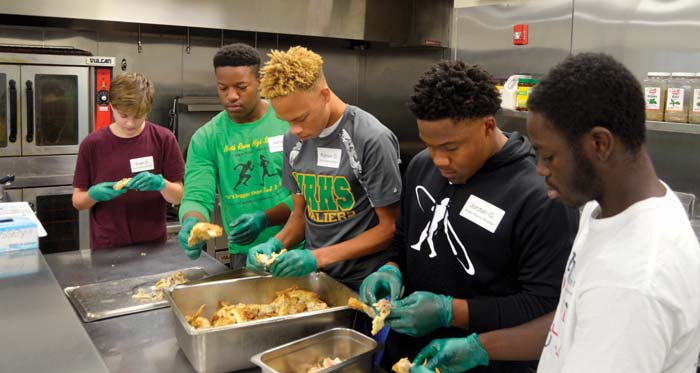 SALISBURY — It’s easy to see how a group of teens would want to sleep in on Saturday, especially after an arduous football game the night before, but a small group of North Rowan High School students were up early to do something for others.

The students, who are members of Built 2 Lead, volunteered to prep and serve lunch at Rowan Helping Ministries. The students were handpicked by world history teacher Reggie McConneaughey to be a part of the program.

The students deboned some rotisserie chicken to make a chicken casserole and hand-rolled forks for the day’s lunch. Kitchen assistant Reggie Furr said the students would served 100 to 120 people during the lunch hour. The food that the students prepped came from Food Lion and other individuals in the community.

The program Built 2 Lead was created by McConneaughey, who wanted to be a mentor for and give students an outlet to help someone other than themselves.

The goal is to teach the all-male students in the program life skills and the spirit of helping others, he explained.

Senior Malcolm Wilson said he’s not the type of person to sit around on the weekend.

“I can either sit here or get up and be productive. I like to get active,” Wilson said.

Kemon O’Kelly said it was an honor to serve people.

Jordan Goodine said he hoped that the service might make someone’s day.

“Maybe this will show other kids at school who have better opportunities how to provide for others,” Goodine said.

Goodine said the students would also like to have a canned food drive, clean up at Royal Giants Park in East Spencer, host a fundraiser and donate the money to a local organization.

Freshman Evan Davis said being part of the program and volunteering gives him an opportunity to show others that North Rowan students can and do help around the community.

“I tell them, ‘I’m not perfect, but I do grow as a man every day and learn from the last day,'” McConneaughey said.

McConneaughey said he was grateful to North Rowan Principal Meredith Williams for allowing him to create such a program for the young boys at the school. He meets with the students once a week every Thursday during school hours. This is the first year for the program, but McConneaughey has aspirations to expand.

McConneaughey said he eventually would like to see Built 2 Lead programs at all of the schools.

The program is student-driven, McConneaughey said, acknowledging that he’s just an overseer for the program and wants the older students to even feel comfortable mentoring the younger students.

The students choose where they volunteer and what they invest their time into, he said.

He said the format of the program is a way of holding each other accountable.

Volunteers not only serve meals in the kitchen, but throughout the shelter. Sometimes if a group or individuals can’t volunteer they provide food, toiletries, clothes and other needs.

The agency often provides an itemized list of needs on its website. To volunteer or make a donation, visit http://www.rowanhelpingministries.org to help.