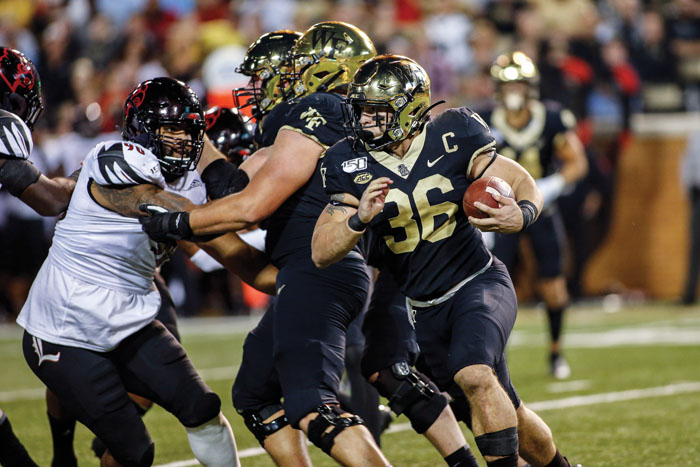 Wake Forest running back Cade Carney, right, carries the football against Louisville during the first half of an NCAA college football game in Winston-Salem, N.C., Saturday, Oct. 12, 2019. (AP Photo/Nell Redmond)

By JOEDY McCREARY AP Sports Writer
WINSTON-SALEM (AP) — Evan Conley ran 41 yards for a critical touchdown with 2:15 remaining, and Louisville held off Wake Forest’s late rally to upset the 19th-ranked Demon Deacons 62-59 on Saturday night in the second-highest-scoring game in Atlantic Coast Conference history.
Conley also threw two touchdown passes to Dez Fitzpatrick and Hassan Hall returned a kickoff 100 yards for a score to help the Cardinals (4-2, 2-1) spoil Wake Forest’s first national ranking in 11 years.
The combined 121 points was second only to the 137 scored in Pittsburgh’s 76-61 victory over Syracuse in 2016. The teams combined for 1,188 total yards in this one.
Wake Forest (5-1, 1-1) trailed 52-31 with less than 6½ minutes remaining before rallying, with backup Sam Hartman — the starter for most of 2018 — throwing two touchdown passes in 35 seconds. He hit Scotty Washington from 22 yards before his 21-yarder with 3:37 left to Jack Freudenthal — who recovered the onside kick that set up his scoring catch.
Conley took a fourth-and-1 keeper 41 yards for a touchdown to give the Cardinals a 62-52 lead with 2:52 remaining — plenty of time for the Demon Deacons to counter, with Hartman leading them 92 yards in seven plays and scoring on a 1-yard keeper with 1:10 remaining.
The onside kick squirted downfield, Tutu Atwell came away with it in a pileup with 1:05 left and the Cardinals ran out the clock to seal their first big victory under new coach Scott Satterfield.
Micale Cunningham threw a 55-yard touchdown pass to Seth Dawkins and a 9-yarder to Atwell before leaving in the second quarter with an injury. Conley took over and finished 12 of 18 for 196 yards with touchdowns of 15 and 50 yards to Dez Fitzpatrick.
Jamie Newman threw three touchdown passes to Sage Surratt — covering 12, 3 and 47 yards — and finished 24 of 41 for 251 yards, but was intercepted twice.
THE TAKEAWAY
Louisville: The Cardinals took yet another huge step toward putting the misery of their 2-10 finish in 2018 behind them. They earned their first victory over a Top 25 opponent since their Lamar Jackson-led 63-20 rout of then-No. 2 Florida State in 2006, and their first against a ranked team on the road since Charlie Strong and Teddy Bridgewater won at No. 24 West Virginia in 2011.
Wake Forest: So much for the possibility of two unbeatens facing off in Death Valley when Wake Forest visits No. 1 Clemson on Nov. 16. The Demon Deacons’ first appearance in the Top 25 since 2008 figures to be undone by a series of mistakes and an inability to keep up with the speedy Cardinals. Their seven-game winning streak — which dated to last season and matched the 1944 team’s as the longest in school history — also is history.
UP NEXT
Louisville: Plays host to No. 1 Clemson on Saturday.
Wake Forest: Plays host to Florida State on Saturday night.
___
More AP college football: https://apnews.com/Collegefootball and https://twitter.com/AP_Top25