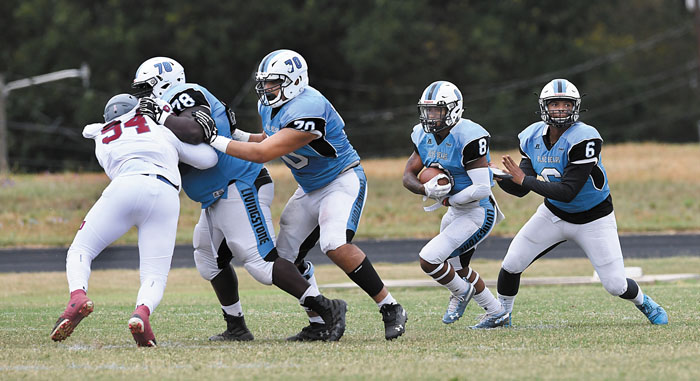 Livingstone's Andrew Faramio (8), shown in an earlier game this season, scored a 6-yard TD on Saturday against St. Augustine's. ... File photo by Wayne Hinshaw, for the Salisbury Post

With the surprising win, the Falcons improve to 1-5 overall and 1-2 in the CIAA. They also continue their dominance in the series with Livingstone, winning for the 16th time in the last 17 games.

The Blue Bears fall to 4-2, their second straight loss after starting the season with four straight wins. They are 1-2 in the CIAA.

Livingstone failed to take advantage of all of its first-half opportunities and it came back to haunt the Blue Bears at the end.

“We didn’t make the plays we needed to make and St. Aug’s did,” said Livingstone coach Daryl Williams. “It’s a demoralizing loss, a nightmare-type of game, but we had a great meeting when we got back to campus. We talked about staying with it, staying together and finding a way to get over the hump.”

All six of LC’s first-half drives ended on St. Augustine’s side of the field, but, yet, the Blue Bears held just a 10-0 lead at halftime. Livingstone scored a field goal and a touchdown on two of the drives but the other four had bad endings — missed field goal, interception and on downs twice, once at doorstep of the goal line and another time at the SAU 18-yard line.

“We just could not get the ball into the end zone,” Williams added.

However, four plays later, LC safety Walter Watkins intercepted SAU’s D’Ontre Gilliard’s pass and returned it 54 yards to the Falcons’ 15-yard line. Again, the Blue Bears had to settle for a field goal attempt and this time, Gomez was good from 25 yards out, for a 3-0 lead.

That turnover ignited the Falcons’ offense and three pass plays, covering 57 yards, had the home team knocking on the door at the LC 21. But the drive stalled and on the third play of the second period, Andre Labat’s 34-yard field goal attempt was blocked by the Blue Bears’ Rodney Brooks, preserving the lead.

Coach Daryl Williams’ LC offense did put together a solid drive right before halftime, marching 86 yards on nine plays. Running back Andrew Faraimo scored on a six-yard run at the 2:39-mark for a 10-0 halftime lead.

The Falcons took the second-half kickoff and cut the deficit to 10-7, after quarterback Jalen Jones scored on 1-yard plunge, concluding an eight-play, 76-yard drive.

The trend of missed chances for the Blue Bears continued in the third quarter. After Livingstone recovered a fumble at the Falcons’ 27-yard line, Hayes threw another interception, picked off by SAU’s Teyon Davis in the end zone.

Late in the third period and crossing over into the fourth, St. Augustine’s went on an 11-play, 72-yard drive that ended in a 10-yard TD pass, from QB Jones to receiver Aakiel Greer. Suddenly, the Falcons led, 14-10, with 12:59 remaining in the game.

The Blue Bears drove to midfield on its next possession but was force to punt. SAU went on another long drive — 11 plays, 75 yards in six minutes — Jones hitting Dontarian Evans for a 20-yard TD pass, with just 5:20 left.

That 20-12 score turned out to be the final margin, as Livingstone’s last two drives ended with a turnover on downs and an interception — Hayes’ third of the game.

After dominating the first half, Livingstone ended up being out-gained by the Falcons, 352 yards to 308.

Defensive end Gibson Ziah had six tackles and two QB sacks to lead the LC defense. Lineman Deandre Moore made six stops, one for a sack.

Livingstone returns to action next Saturday, also in Raleigh. The Blue Bears visit Shaw for a 12 noon kickoff. St. Aug’s is on the road next week, against Winston-Salem State.