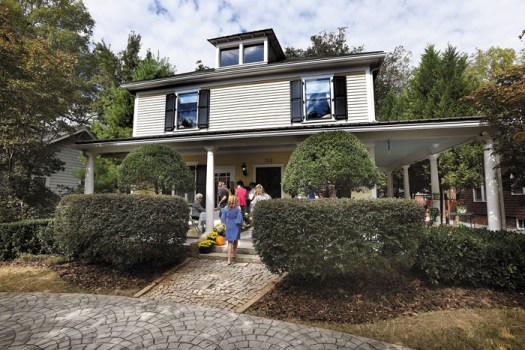 October Tour 2019: Bean-Cathey House at 722 S. Fulton Street. Vistiors lined up to tour the house. Photo by Wayne Hinshaw, for the Salisbury Post 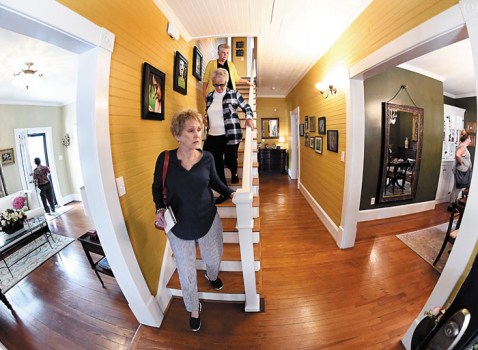 October Tour 2019: Bean-Cathey House at 722 S. Fulton Street. The hallway has the orginial wooden wall covering and orginial pine wooden floor. Vistiors coming down the stairs. The living roon is to the left and the dining room is to the right. Photo by Wayne Hinshaw, for the Salisbury Post 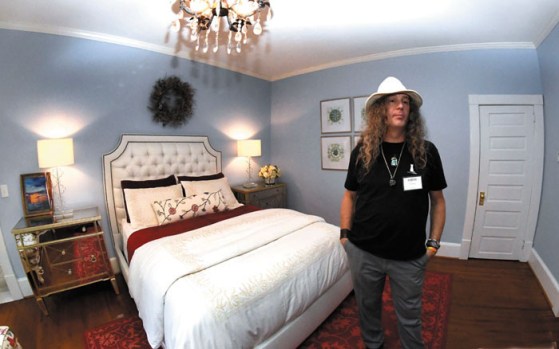 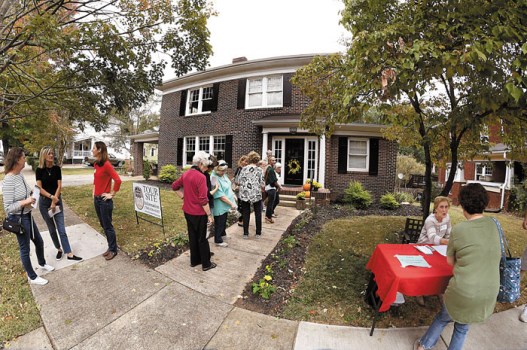 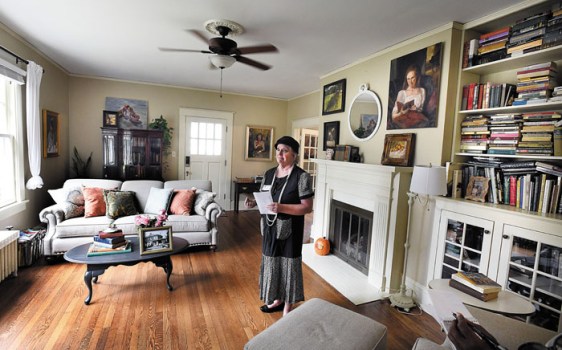 October Tour 2019: Heilig-Hennessee House at 324 W. Thomas Street . Docent Rochelle Boratko stands in the brightly sunlit living room waiting for visitors. The four-square house was built in 1927 and is now the home to Mark and Caroline Stephenson. Mark is an artist. His paintings fill the home. Photo by Wayne Hinshaw, for the Salisbury Post

SALISBURY — Jake McDaniel has kept his promise to his daughters for the last three years. Every October, the family walks through all of the homes on the Historic Salisbury Foundation’s OctoberTour.

McDaniel was joined on Saturday by his daughters Lauren and Ashley as well as a group of friends for what is the foundation’s biggest annual fundraiser. This year marks the 44th year of the OctoberTour.

There are 10 properties on the tour located in the West Square and Downtown Salisbury areas, with the exception of the 1830s Fisher-Cruse House on East Ridge Road. Additionally, there is food and entertainment located in the 300 block of West Bank Street and the Hall House lawn at Bank Street Cafe. Tour tickets are not needed to enjoy the Bank Street activities.

McDaniel said he’s a history buff and liked to see the construction of the homes on the tour. The group took their time to walk through the Bean-Cathey House, 722 South Fulton St. The four-square home was built in 1905 as a rental home by Mary Bean, the widow of a prosperous distiller.

By 1913, the house was moved closer to the street and turned 90 degrees to its current position. It was sold in 1914 to J.P. and Cora Cathey, the grandparents of Elizabeth Dole.

In the 1930s and 40s, the home was a triplex apartment. The home became empty and fell into disrepair in the early 1980s. In 2005, Gordon and Barbara Senter began a major restoration of the home. The home was previously owned by Sean and Capri Brixey and is currently owned by Kate Fisher.

McDaniel said over the years, he’s driven by some of the houses and wondered what they looked like on the inside. McDaniel said he loves that the OctoberTour gives him the opportunity to see how the owners have maintained the integrity of the homes.

Friend Cindy Hager said she enjoys touring historic homes and took the tour for the first time. She once owned a historic home and appreciates the subtle changes some of the homes have undergone but that they still stay true to the aesthetic of the home.

This year was the first time on the OctoberTour for Mary Graham. She’s always wanted to tour with her mother and grandmother, but never had the chance before. She toured with friends and neighbors.

Graham said she also likes that many of the homeowners restored the homes using local products and materials and, in some cases, local contractors.

C.J. Peters, owner of Top Hat Contractors and a docent volunteer on the tour, is actually one of those contractors who has restored porches, bathrooms and other rooms in some of the homes on this and previous tours. Peters said he is a historic restoration specialist.

He said it’s amazing that homeowners want to save historic homes and take care of them.

Pam and Niven Bayer said they travel each year from their historic home in Saxonburg, a borough in Butler County, Pennsylvania, to peek into the homes on the OctoberTour.

Niven, who is a contractor, has also done construction and restoration on many of the homes, including a former home he lived in when he lived in Salisbury. He still owns a home here and the couple return to visit and take the tour.

Pam said she likes looking at the homes and appreciates how the homeowners have decorated their spaces. The couple spent some time in the Heilig-Hennessee House, located at 324 West Thomas St.

The house is home to artist Mark Stephenson, his wife Caroline and their children. The two-story brick home was built in 1927 and at one time was a rental property. The home was originally owned by Mary Elizabeth Thompson Heilig. Heilig sold the house to her daughter Mary “Elizabeth” and son-in-law William Edward Hennessee.

Hennessee was a commercial artist and it’s believed he designed the city of Salisbury seal. The home remained in the family until it was purchased in the mid-2000s by Jane Nussman and used as a rental property until 2018 when it was purchased by the Stephensons.

Rochelle Boratko, who volunteered as a docent in the Heilig-Hennessee House, told visitors about the unique touches that were kept original to the home and that the only two owners were both artists.

The Pedal Factory will have a free “Tweed Ride” at 11 a.m. today to showcase tour stops. Organizers encourage participants to dress in vintage clothing while riding their favorite bicycle cruisers.

Tickets also are available for purchase for $30 at the Henderson Law Office, at corner of South Church and West Fisher streets. Tours today are from noon to 5:30 p.m. Free trolley service will be available for tour ticket holders.