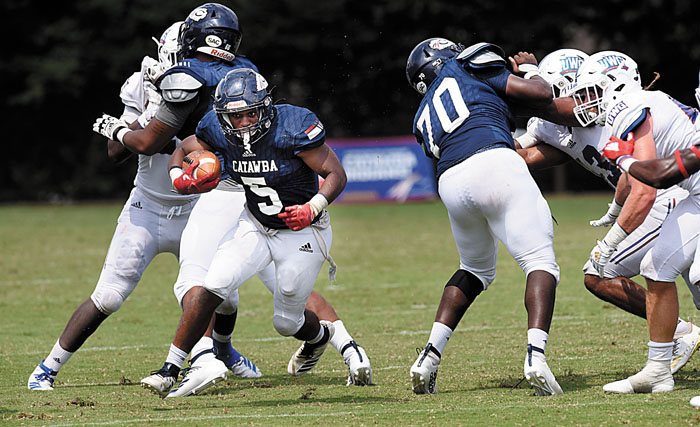 Catawba's Demonte Good (5), shown during an earlier game this season, had a 75-yard TD run on Saturday against Carson-Newman. ... File photo by Wayne Hinshaw, for the Salisbury Post

JEFFERSON CITY, Tenn. — Down 21-0 at halftime, at Carson-Newman’s Burke-Tarr Stadium, the outlook was gloomy for the Catawba Indians.

Marcus Williams accepted Catawba’s second-half kickoff at his 5-yard line, bolted up the middle, shrugged off one tentative arm tackle and headed for the end zone. That 95-yard return was a backbreaker, and it would turn into an endless afternoon of mistakes by the Indians and celebrations by their orange-clad conquerors.

Whatever halftime adjustments Catawba had talked about went up in smoke with Williams’ virtually unimpeded sprint to pay dirt, and they were buried 59-14 by their South Atlantic Conference rival.

It was over a long time before the scoreboard clock said it was officially over. Battered physically and emotionally, Catawba (1-5, 0-3) lost for the fourth straight week. Carson-Newman (4-1, 2-1) dropped a close one to Wingate on Sept. 21, but it stayed alive in the SAC race.

Catawba never found any traction. Carson-Newman kicked off to the end zone for a touchback to start the game. On Catawba’s third snap, the Eagles got pressure on Catawba quarterback Kendall Davis. The result was an interception.

A Cameron Davis fumble recovery and an interception by Cris Page stopped early Carson-Newman thrusts, and the Indians were only down 7-0 entering the second quarter.

But that’s when Carson-Newman struck for a 56-yard pass play to set up a rushing touchdown. Then the Indians lost safety Brenden Westbrook to disqualification after the play that put the Eagles ahead, 14-0.

Carson-Newman quarterback Derrick Evans scooted for a 52-yard score with three minutes left in the half to make it 21-0. The quarterback keeper was a component of Carson-Newman’s triple-option offense that plagued Catawba. A 42-yard run by Evans, a fast QB, had set up Carson-Newman’s first touchdown. When Catawba covered up his pitch man, Evans quickly shifted direction from east-west to north-south, found an open lane and accelerated. Assignments were missed. The Eagles took advantage.

Staring at that 21-0 halftime deficit, a Catawba comeback was a long shot. Even that slim chance evaporated after the kickoff return to begin the second half.

Catawba trailed 31-0 when it finally got on the board when a Carson-Newman punt attempt brought chaos. Kobe Branch picked up a fumble by the punter and scored from 20 yards out to put the Indians on the board with 5:23 left in the third quarter.

Carson-Newman kept right on scoring, even with backup quarterbacks in the game, and held a 52-7 lead before Demonte Good broke loose on a 75-yard scoring run for Catawba with 3:10 remaining. That breakout helped Catawba’s statistical day considerably.

But Carson-Newman still got in the last word when Devon Moore returned the ensuing kickoff for 93 yards and Carson’s third special-teams touchdown of the day.  Moore, a certified sprinter, broke outside, hit the sideline and easily out-ran everyone.

Besides its two kickoff return touchdowns, Carson-Newman scored on a blocked punt.

Good finished with 17 carries for 124 yards, but Davis was held to 87 passing yards.

There’s not a lot Catawba can do about this one —  except flush it and forget about it.

The Indians will be home next Saturday at noon against Newberry. Carson-Newman goes to Lenoir-Rhyne for one of the bigger SAC games of the season.