Cancer patient’s advice on mammogram: ‘Get it done’ 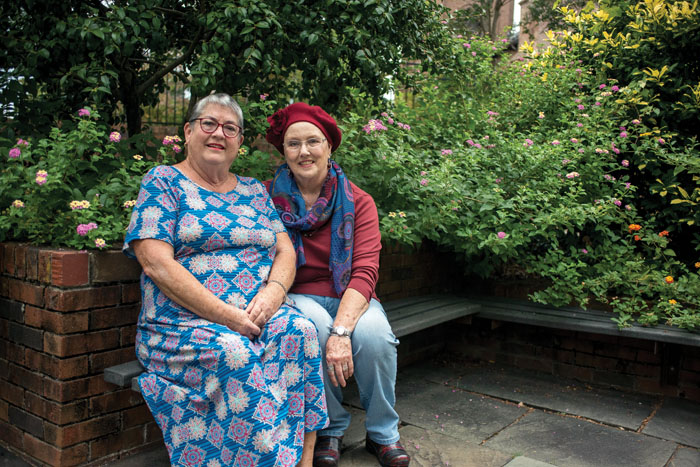 JON C. LAKEY/SALISBURY POST Kaye Brown Hirst, left, and Sharon Deal pose for a photo in the garden behind the Rowan Museum Recently. Both ladies are in the recovery stage of cancer. Deal had just completed her final treatment of chemotherapy. Salisbury,North Carolina,9/30/19.

A member of Rowan Museum, she was its longtime executive director. She’s a member of the Salisbury Rotary Club and chairs the congregation at Organ Lutheran Church, where she also does altar flowers and teaches the Saints and Sinners Sunday school class.

She’s vice regent of the Elizabeth Steele Daughters of the American Revolution chapter and a member of the Sweet Potato Queens, which has raised hundreds of thousands of dollars for the American Cancer Society.

“It helps not to sit home and feel sorry for myself,” says Hirst, 67, who was diagnosed with breast cancer in February.

She had back surgery last summer and was in the hospital for a month, followed by physical therapy at home.

“Until February,” she says, “I was looking forward to being done with all that and getting on with life.”

She was a little past a year for her annual mammogram, she says, but still within a reasonable time frame. She got a call-back and didn’t think much of it. She has dense breasts, and other call-backs had always been fine.

The message this time: “We found something.”

Hirst was told it appeared to be small and deep. As much of a people person as she is, she didn’t tell a lot of people. Her college roommate just happened to be visiting from Texas and said she’d go with her to meet with Jill McNeely, a breast health navigator for Novant Health Rowan Medical Center.

McNeely told Hirst it was cancer, that it was small, that it wouldn’t have been discovered without the 3-D mammogram she’d just had.

“I felt good they found it and that it was early,” Hirst says.

Initially, Hirst didn’t know if she would only need radiation or chemotherapy too. Her radiologist, Dr. Mark Wimmer, recommended radiation after her lumpectomy.

Hirst’s “team,” which included her college roommate; her best friend, Margaret Basinger; and her stepson, Jeffrey, asked questions on visits she would not think to ask, she says.

Basinger says she visited with Hirst rarely but the two texted back and forth frequently. “And she knew I was only a phone call away. I offered her support as I was able, and she was amazing. Kaye’s approach was to stay active. I don’t believe there was a single day she didn’t get out and do something — usually for somebody else.”

Dr. Leon Newman performed Kaye’s lumpectomy, a fairly simple outpatient procedure, she says. Officially, Hirst’s tumor was invasive ductal adenocarcinoma. The result of her oncotype test was 7. Since that was lower than 26 on a scale of zero to 100, she didn’t need chemo, only radiation.

“Dr. Wimmer said that was one of the lowest scores he’d ever seen,” Hirst says. “I didn’t need chemo, so I was excited about that. I do not like throwing up.”

Hirst met with her radiation oncologist, Dr. Greg Mitro, with a plan to take 33 treatments over seven weeks. Yet an MRI showed a lump in her left breast. She couldn’t believe it.

The lumpectomy had been in her right. That benign tumor was removed in early May, and Hirst started radiation in late June, finishing up in August.

“I met the most wonderful people,” Hirst says. “The radiation is very quick, and you do it at the same time every day. My appointment was at 10 a.m. It made me very tired. I’d come home and take a nap. I still take naps.”

She adds, “I made noodles four days this week at church for the bazaar and rolled dumplings Tuesday night. I know my limits, and when I’m tired I stop and don’t worry about it or worry what anyone thinks.”

But one thing she definitely cares about is mammograms: “Go annually. Get it done.”