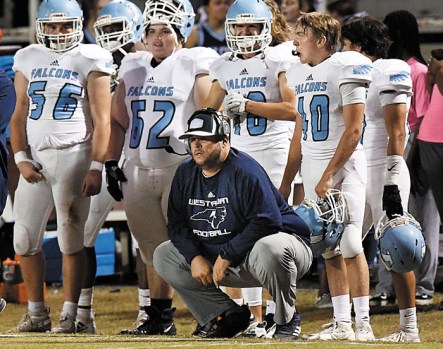 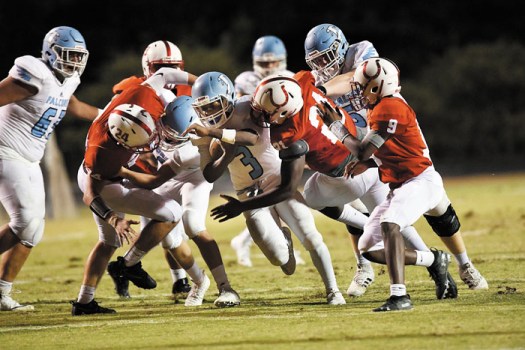 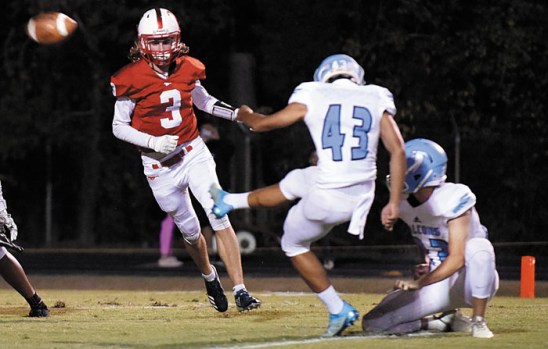 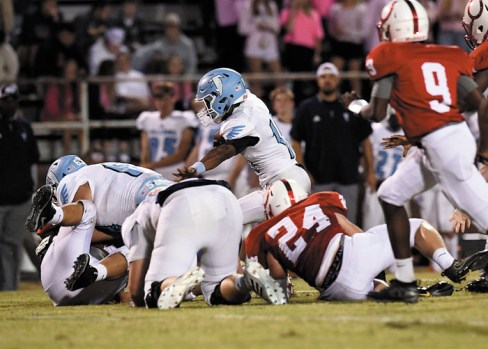 West's Jalen Houston 10 runs through a pile of his blockers.. photo by Wayne Hinshaw, for the Salisbury Post 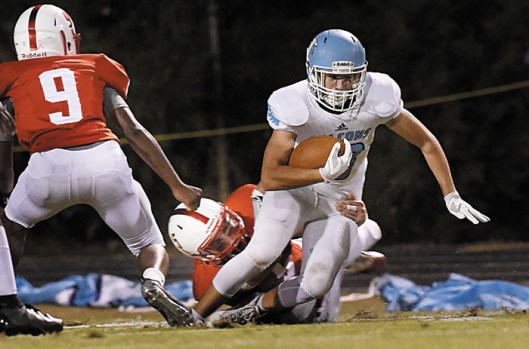 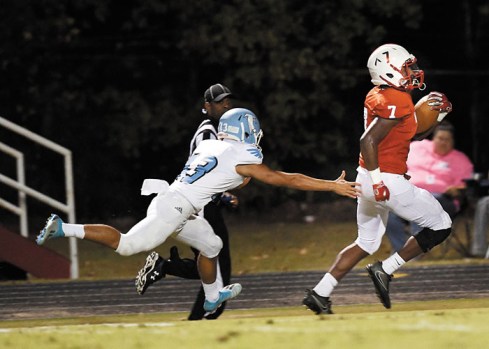 East's Vincent Jones 7 returns a kick off for a TD with West's Federico Cruz 43 chasing. photo by Wayne Hinshaw, for the Salisbury Post 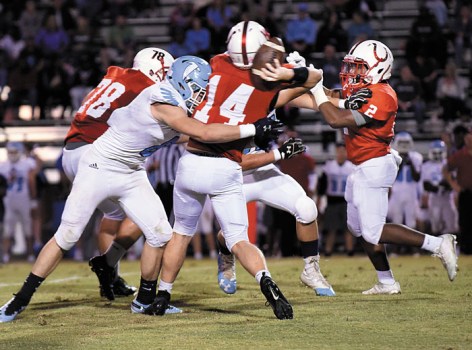 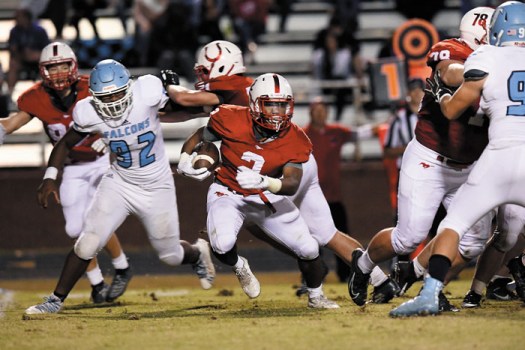 East's Sammy Pinckney 2 behind a block by Dylan Goodnight 78.. photo by Wayne Hinshaw, for the Salisbury Post

GRANITE QUARRY — Don’t look too hard for an explanation.

West Rowan made all the big plays and East Rowan all the big mistakes in Friday’s North Piedmont Conference opener. The result, predictably, was a ground-and-pound, 31-7 victory for the visiting Falcons.

“We’ve got five seniors up front. That makes us feel real good about our offensive line,” winning coach Joe Nixon said after West (4-3, 1-0) ran for 460 yards and won its second straight game. “Once they settled in tonight, they played really well. They were good.”

West boasted not one, but two running backs who rushed for more than 200 yards. Senior Jalen Houston ignited his Maserati engine, carried 16 times for 234 yards and scored three touchdowns in the decisive second quarter. Teammate Cayleb Brawley, a sophomore who was more of a workhorse than a show pony, added 206 yards on 33 attempts and scored the game’s most important TD on a 1-yard burst.

“This is what happens when you get handled up front,” he said, shortly after the Mustangs (3-4, 0-1) were out-gained 506-107. “That’s the game. I’m gonna tell you exactly what I told the kids. Defensively for them, they were in our backfield all night. Offensively, they were pushing our defensive lineman back into our linebackers. We just lost the game up front. There’s no other way to say it.”

Houston, a sprinter extraordinaire, who was Rowan County’s track athlete of the year in 2018, wasted little time turning the game into a meet. Following a scoreless first period, he opened the second by taking a handoff from West quarterback Noah Loeblein, maneuvered through a hole wide enough to park the team bus in, and sprinted 67 yards down Broadway for a touchdown.

“Levi (Jenkins), our center, made a great block on the play,” Houston noted. “But right before that, our coach said to me, ‘Houston, it’s time to score.’ I just said, ‘OK coach.’ And I did.”

Three minutes later, Houston did it again. The time, he gave West a 14-0 lead with a 75-yard TD run on a counter play off left tackle. East, which stopped the Falcons on their first two drives, were suddenly back-pedaling and losing traction.

“We struggled on kicks and pulls,” said East linebacker Isa’ah Cauthen. “They were doubling on our defensive linemen and coming at us real fast. On some plays, we couldn’t see anything.”

East trimmed its deficit in half just 14 seconds later, when junior Vincent Jones returned the ensuing kickoff for a “kick-six” — 85 yards for a touchdown. About a half-dozen West special-teamers had a shot at Jones as he danced down the left sideline for his sixth TD of the season.

“We’ve had quite a few long runbacks this year,” Fitz said. “Most teams won’t kick it to us, because we’ve got No. 2 (Sammy Pinckney) back there. They’ll sky-kick like West tried in the beginning of the game.”

West reclaimed momentum on its next possession, when Loeblein directed a 5-play, 65-yard scoring drive capped when Brawley powered into the end zone for his third varsity TD. A key play was Houston’s 35-yard romp to the East 13.

“The blocking was there all night,” he said. “Those guys played hard and never quit.”

By halftime, West’s lead bulged to 28-7, courtesy of Houston’s 10-yard stumble into the end zone. Once again, the beefy Falcons’ OL paved the way.

“Obviously, we had a size advantage,” said 6-foot-6, 275-pound right guard Jonny Hassard. “The first two drives, we didn’t finish. But these running backs we have, they’re great at reading blocks. They find the hole and don’t hesitate to hit it.”

“I love them to death,” added the 6-5, 285-pound Fuentes-Berrios. “They’re not afraid of contact. They can put down a shoulder and run somebody over or find a way to make them miss.”

On this night, Houston and Brawley didn’t miss a thing.

NOTES: East quarterback Logan Forbis suffered an undisclosed injury late in the first half and didn’t return. Junior Caleb Jarvis relieved, but failed to complete a pass. … East cornerback Tahj Young was ejected for throwing a punch with 1:19 remaining in the second quarter. He’ll have to sit out East’s home game next Friday against Carson. … Pinckney rushed for 56 yards and boosted his season total to 1,044, but West keyed on him. Eight of his 16 attempts went for negative yards. … West’s defense pitched a shutout and limited East to eight first downs and 90 yards on the ground. Defensive back Daniel Sell had a third-quarter interception. … The Falcons host South Iredell (2-5, 0-1) next Friday.